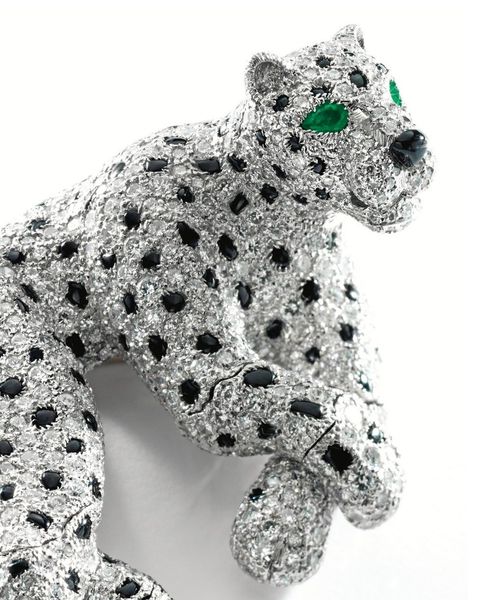 Designed as a panther in repose with an articulated tail and paws and a head that swivels, set with round diamonds weighing 17.42 carats, accented by an onyx nose and spots, further decorated with two pear-shaped emerald eyes weighing .20 carat, signed Cartier Paris, numbered 103772, also signed Cartier, numbered 11149, with French assay and workshop marks. With signed box. Estimation: 150,000 - 250,000 USD

Catalogue Note: Viewed as a symbol of power, valor and the exotic, the panther motif utilized by Cartier is one of the most iconic jewelry designs of the twentieth century. Although the design house drew inspiration from spotted panther coats in pieces dated as early as 1914, the concept expanded dramatically upon Jeanne Toussaint’s appointment as creative director in 1918. Dubbed ‘The Panther,’ Toussaint’s chic and contemporary personal style helped the feline-inspired creations to flourish. Throughout the 1920s, vanity cases proved to be the ideal canvas on which Cartier was able to display the panther in its entirety. Often depicted amongst lush landscapes, these designs became the jeweled counterparts to Paul Jouve’s illustrations in Rudyard Kipling’s Jungle Book. It was not until 1948, when the Duke of Windsor commissioned a golden panther atop a cabochon emerald, that the once two-dimensional cat burst with life in a new series of three-dimensional designs.Displaying skillfull craftsmanship, the new panther designs featured flexible platinum settings which allowed the paws, tail and head of the cat to move with the same agility of those in the wild. In addition to the Duchess of Windsor, the Great Cat jewels were admired and commissioned by Princess Nina Aga Khan, Barbara Hutton and Daisy Fellowes, among others. Embodying a delicate balance between unbridled power and reserved elegance, Cartier’s panther jewels continue to bring allure and glamour to those they adorn.