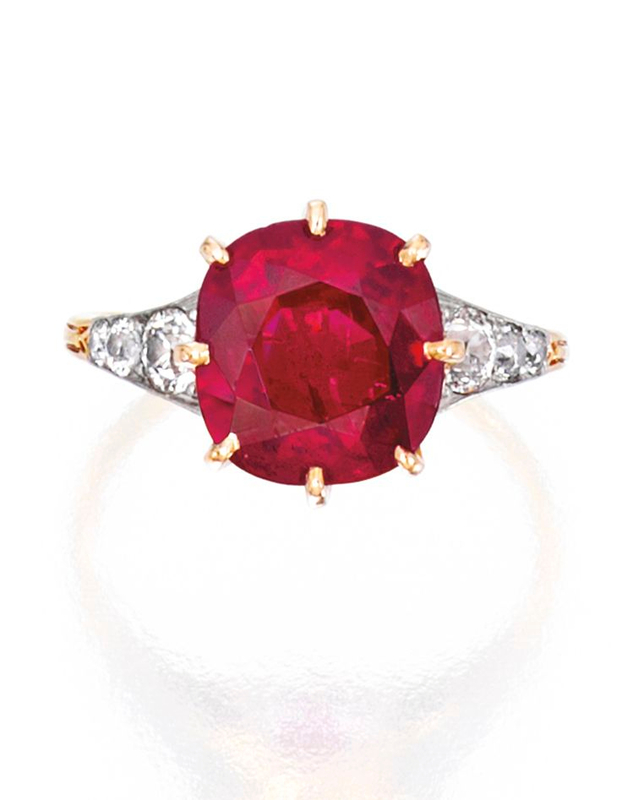 Property formerly from the collection of Katharine Dexter McCormick

Katharine Dexter McCormick (1875-1967) was a philanthropist and social advocate who spent much of her life opening doors for women that remained tightly shut well into the twentieth century. Born in Dexter, Michigan, a town named after her grandfather, and raised in Chicago, Katharine’s parents instilled in her the desire to obtain a higher education. In 1904 she became only the second woman to graduate from the Massachusetts Institute of Technologyand the first to graduate with a degree in biology. In that same year, Katharine married Stanley McCormick, heir to the International Harvester fortune. According to family tradition, the ruby ring offered here was Katharine’s engagement ring from Stanley.
As a prominent member of the National American Woman Suffrage Association (NAWSA), Katharine fought for women’s rights on multiple levels. Blending her educational background in the sciences with her involvement in NAWSA, McCormick helped fund research completed by renowned activist Margaret Sanger, furthering her beliefs that physical freedom was the gateway to other liberties. Although Katharine did not live to see its completion she also funded the construction of an all-female dormitory at MIT, named Stanley McCormick Hall, to ensure women accepted to the university would have proper boarding. As biographer Armond Fields notes, “…Katharine unswervingly dedicated her entire life and most of her wealth to women’s legal, social, psychological, and physical emancipation.