A superbly enamelled and possibly unique famille-rose 'Peach' box and cover, Mark and period of Yongzheng (1723-1735)

A superbly enamelled and possibly unique famille-rose 'Peach' box and cover, Mark and period of Yongzheng (1723-1735) 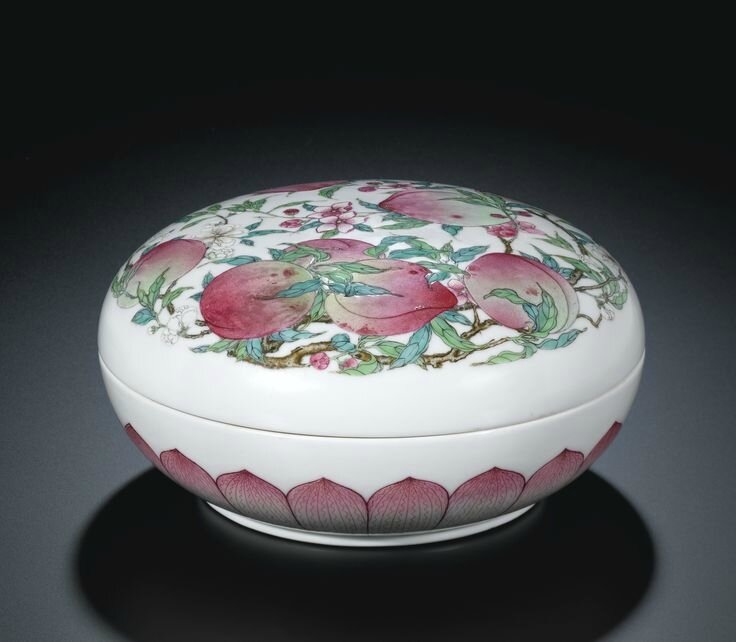 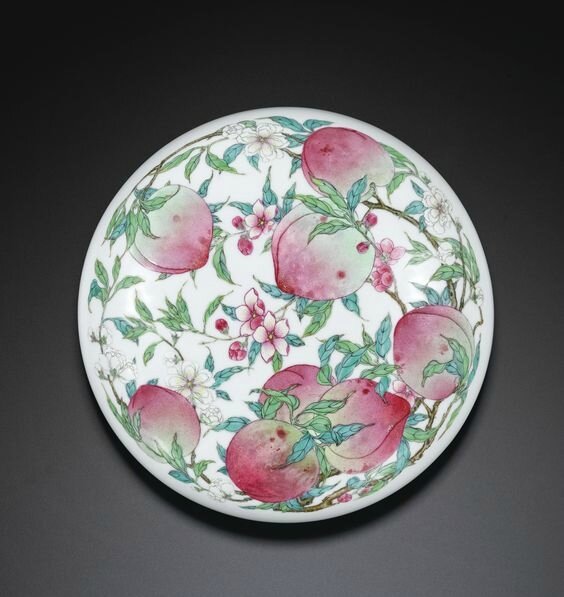 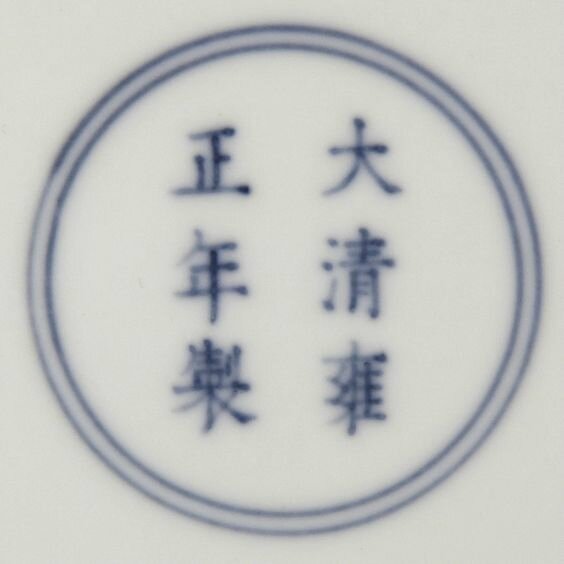 singularly beautiful, of thickly potted circular section and compressed rounded form, the cover sumptuously decorated with a large medallion of two varieties of peach, their branches entwined and bearing eight large brightly coloured fruits, small five-petalled rose-pink blossoms and double white ones, and leaves in several tones of green, the box painted with a skirt of lotus petals shaded in tones of rose pink to greenish yellow with crimson-pink veins, the insides plain white, the base inscribed with a six-character mark within a double-circle

The Yongzheng Emperor (r. 1723-35) was a strong believer in portents of good fortune. Having ascended the throne under somewhat nebulous circumstances, the legality of his succession was persistently questioned, which made him more than any other Qing emperor receptive for auspicious symbolism. Court artists such as the Italian painter Giuseppe Castiglione (AD 1688 – 1766) presented him with paintings heralding good fortune, court artisans fashioned wish-granting ruyi sceptres in many different materials, and the emperor surrounded himself with portents of good luck.

Peaches are perhaps China's most auspicious fruit, having a long tradition as omens of longevity and harbingers of happiness, eight is a propitious number, and flowering peach branches are believed to ward off evil. Tao Qian (365-427) tells of a fisherman, who when following the source of a stream in a peach orchard –'Peach Blossom Spring' – through a crevice in a rock, discovered a paradisiacal world. A peach orchard is also the setting for the oath of brotherhood sworn by the three main protagonists of the novel Romance of the Three Kingdoms. The peaches of immortality which are said to grow in the garden of Xi Wang Mu, the Queen Mother of the West, which flower only once every three thousand years and to take as long again for their fruit to ripen, are then offered in a banquet to the immortals. Dongfang Shuo, a witty and clever Han dynasty scholar (2nd/1st century BC), who became the hero of many legends is reported to have stolen peaches of immortality and thus to have become immortal. And the same feat is told of the scheming monkey Sun Wukong, hero of the novel Journey to the West, who accompanied the monk Xuanzang on his trip to India to obtain Buddhist sutras.

The Yongzheng Emperor was clearly attached to these stories, as he had himself painted as the recipient of such good luck in an album leaf that shows him in possession of a peach of immortality, possibly handed to him by a monkey hanging from a nearby tree (fig. 1). It is not surprising therefore that in the Yongzheng period the peach motif became one of the favourite motifs on porcelain. A fruiting and flowering peach tree had in the Kangxi period already been used once in the imperialEnamelling Workshops of the Forbidden City to decorate a metal-bodied vase that remains in the Beijing palace collection (fig. 2). The transfer of the motif onto porcelain probably took place under the auspices of Tang Ying (AD 1682-1756), the Yongzheng Emperor's trusted official who, after a spell in charge of the falangcai workshops at Beijing, was in 1726 sent to Jingdezhen to supervise the porcelain production there. The soft colouration of fruiting and flowering peach branches were a design tailor-made to show off the new fencai (famille rose) palette, which had just been introduced to Jingdezhen in the years preceding the Yongzheng reign. Its wide range of pastel shades from a fresh green over an opaque white to a pale rosé tone and eventually a deep pink was never otherwise displayed more impressively. No other box of this peach design appears to be known and the rendering of its blossoms and fruits is of particularly high quality, done with great care and much colour variation. The box most likely represents an early product of the Yongzheng reign, done before the pattern became standardized to appear on the wellknown vases of tianqiuping shape, bowls and smaller dishes, which have remained popular well into the Qianlong period. In its execution it may be compared to some other unique Yongzheng peach vessels, such as the famous vase from the collection of the Hon. Ogden R. Reid now in the Shanghai Museum, sold in these rooms, 7th May 2002, lot 532 (fig. 3); or a large and unusually painted Yongzheng peach dish from J. Pierpont Morgan, later also in the Van Slyke collection together with the present box, sold in these rooms 29th April 1997, lot 400 (fig. 4). An early Yongzheng date for the present box is also suggested by the most unusual design of lotus petals on the lower part, which was equally adapted from copper-bodied enamel ware made in the Forbidden City's falangcai workshops. It appears first on a bowl and stand (fig. 5), and on a covered bowl of the late Kangxi period, both remaining in the Beijing palace collection. This petal design was otherwise rarely used on imperial porcelains, but was taken up again in the Qianlong period on fine fencai gourd flasks with butterflies and flowers, an example of which is also in the Meiyintang collection (Krahl, op.cit., vol. 2, no. 962). Imperial porcelain boxes with fencai designs of any kind are extremely rare. Only two others have been sold at auction, both of similar domed shape and size, but with the Yongzheng reign mark arranged in three vertical lines: one also from the Van Slyke and later the Goldschmidt and Robert Chang collections, with a bird, magnolia branch and peonies, was sold in our New York rooms, 31st May 1989, lot 210; in these rooms, 13th November 1990, lot 43, and at Christie's Hong Kong, 2nd November 1999, lot 519; the other from the T.Y. Chao collection, with butterflies, hibiscus and morning glories, was sold in these rooms 18th November 1986, lot 129.

Frederick J. Van Slyke (died 1968) of Baltimore, Maryland, assembled a fabled collection of Chinese as well as European porcelains, of which some pieces are in the Walters Art Museum, Baltimore, and some in the Baltimore Museum of Art.