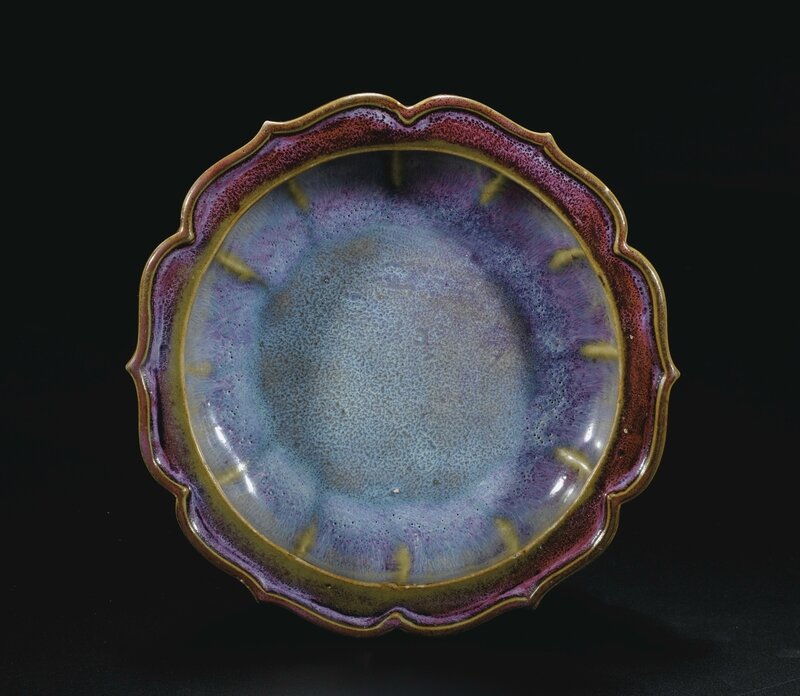 the lobed sides divided in six bracket-foliations, rising to a barbed everted rim with a beaded border, supported on three ruyi-shaped feet, the glaze on the interior of milky-lavender tone pooling in the centre, the exterior of vivid purple tone, thinning to a mushroom tone on the edges of the rim and fluting, the thick glaze coagulating in droplets around the foot, the base covered with a thin brown dressing and incised with the character er ('two'), before firing, and the inscription Jian fu gong ('Palace for the Establishment of Happiness'), and zhu shi jia shan yung ('For use at the False Mountain of Bamboo and Stone'), both engraved after firing, the footring encircled with numerous small spur marks

NOTE: ‘Jun’ ware derives its beauty from the striking and thick opaque glaze of varied bright blue and red colouration that becomes almost translucent around the rim and the edges of the vessel where the glaze thins significantly. Although ‘Jun’ wares are known as one of the five ‘classic wares’ of the Song period, mould-made flower vessels such as the present bowl, are now overwhelmingly attributed by both Chinese and Western scholars to the types made at Yuzhou, Henan province, an area formerly known as Junzhou from the Jin (1115-1234), Yuan (1279-1368) or Ming period onwards. Regina Krahl in Chinese Ceramics from the Meiyintang Collection, vol. 3, pt. II, London, 2006, p. 456, notes that ‘Jun’ is not mentioned in any pre-Ming text and although it was later ranked among the five ‘classic wares’ of the Song the exact identity of ‘Jun’ is still a matter of debate. It was a ware that seems to have appealed particularly to the elite from the Jin dynasty onwards, when some of the most spectacular and complex pieces were being made. A sherd of this form excavated from the kiln-sites, is illustrated in Wenwu, 1975, no. 6, p. 60, fig. 1, together with a complete bulb bowl, p. 61, fig. 22.

Narcissus bowls of the same size and form, also known as flowerpot stands (pentuo) of lotus flower shape, and impressed with the same numeral 'two' (er), are in the National Palace Museum, Taipei, included in A Panorama of Ceramics in the Collection of the National Palace Museum. Chun Ware, Taipei, 1999, pl. 37; in the Palace Museum, Beijing, published in The Complete Collection of Treasures of the Palace Museum. Porcelain of the Song Dynasty (I), Hong Kong, 1996, pl. 31; in the Musée Guimet, Paris, no. G1651, published in Daisy Lion-Goldschmidt Les Poteries et Porcelaines Chinoises, Paris, 1978, pl. IX (C) and on http://www.guimet-grandidier.fr/html/4/index/index.htm, from the Grandidier collection; and in the British Museum, illustrated in R.L. Hobson, The Eumorfopoulos Collection, vol. 5, London, 1927, pl. LXXI, no. E440, from the Eumorfopoulos collection. The Jianfugong is a palace hall is the northwestern corner of the Forbidden City in Beijing. Other 'jun' vessels intended for the same palace hall, and inscribed accordingly, include a zhadou bowl and a rectangular flowerpot in the National Palace Museum, Taipei, illustrated in op. cit., pls. 13 and 25, with numerals 'six' and 'ten' respectively; and a mallow-shaped flowerpot in the Palace Museum, Beijing, with numeral 'nine', illustrated in The Complete Collection of Treasures of the Palace Museum. Porcelain of the Song Dynasty (I), Hong Kong, 1996, pl. 15.

Compare three further narcissus bowls of comparable sizes in the National Palace Museum, Taipei, with different numerals, illustrated in op.cit., pls. 38-40 and eight other flowerpot stands with different outlines and occasional hall marks, in ibid.pls. 41-48; two narcissus bowls in the Palace Museum, Beijing, published in op.cit,, pls. 29-30, together with two mallow-shaped bowls, ibid., pls. 32-33; a further narcissus bowl from the Grandidier collection in the Musée Guimet, Paris, no. G 2722, published in Beurdeley, Porcelaines de la Compagnie des Indes, Fribourg, 1962, Pl. XIX; another from the Sir Percival David collection and now in the British Museum, London, in the Illustrated Catalogue of Ru, Guan, Jun, Guangdong and Yixing Wares in the Percival David Foundation of Chinese Art, London, revised ed. 1999, no. 37. A flowerpot stand is in the Tokyo National Museum, published in Ceramics Art of the World, vol. 10, 1955, pl. 50 (bottom), and another from the Shire Collection was included in the Oriental Ceramic Society 'Exhibition of Sung Dynasty Ware, Chün and Brown Glazes', London, 1952, Catalogue no. 41.