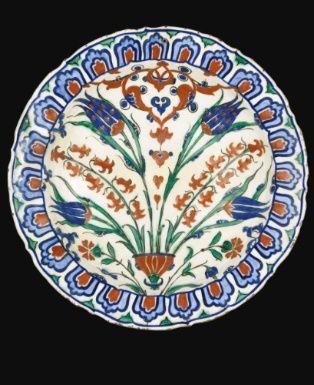 of shallow rounded form, decorated in underglaze cobalt blue, viridian green and relief red, outlined in black, featuring a vase emanating sprays of tulips and hyacinths, with an arabesque motif in the centre, the rim with a series of lobed archways, the reverse with paired tulips; 36cm. diam. Estimation: 60,000 - 80,000 GBP

NOTE: The present dish stands out for its deep and richly coloured design comprising tulip stems and hyacinths emanating from a vase and featuring chinoiserie motifs, within a petalled border. The production of Iznik pottery underwent an important revolution in technique and style during the mid-sixteenth century. Primarily due to the introduction of a new colour known as ‘Armenian bole’, a fresh tonal breadth was infused into the polychrome palette and catalysed the move towards the inclusion of predominantly floral and vegetal designs (Venetia Porter, Islamic Tiles, London 1995, pp.103-4). Armenian bole is a rich sealing-wax red pigment produced by combining silica and iron oxide. Itsemployment on Iznik ware spawned a “decorative style … in which tulips, hyacinths, carnations, roses and other flowers were depicted with great realism, along with other Chinese-inspired motifs, such as the lotus flower, chrysanthemum and peony” (Maria D’Orey Capicho Queiroz Riberio, Iznik Pottery and Tiles in the Calouste Gulbenkian Collection, Lisbon 2009, p.51).