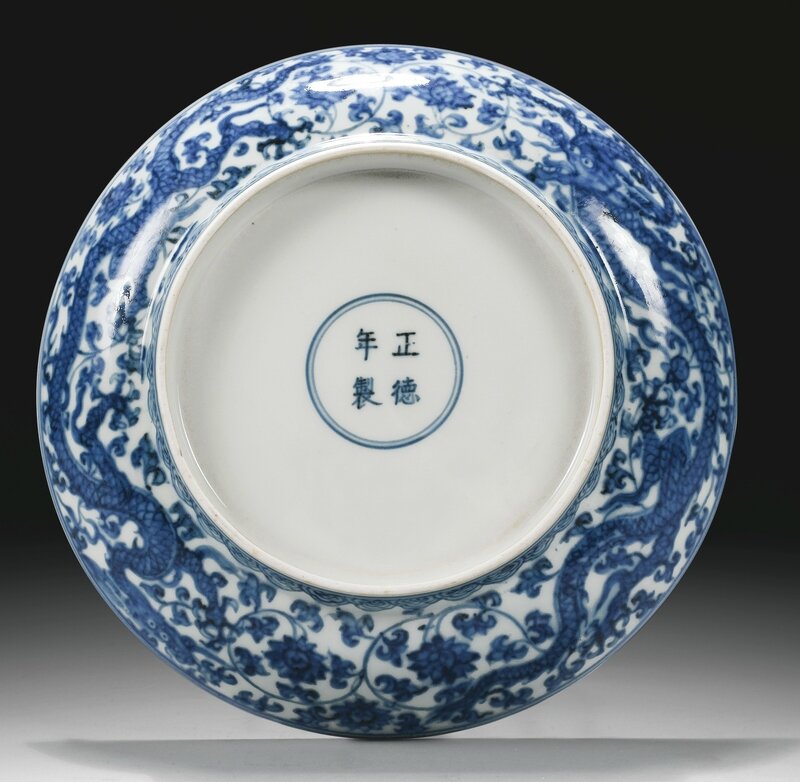 well potted with rounded sides and painted in vibrant inky-blue tones with a central medallion enclosing a sinuous five-clawed dragon, surrounded by two striding dragons at the cavetto, with two further dragons around the exterior framed by a ruyi band at the foot, all against a dense lotus scroll and within double-line borders, the base inscribed with a four-character mark within double circles

Note; The dragon and lotus design was one of the favourite designs of the Zhengde emperor and adorned a variety of vessels, including bowls, stemcups, jars of zhadou shape and dishes. Although this design was popular throughout the Ming period, the dense and even composition rendered in soft cobalt blue seen on the present dish is peculiar to the Zhengde reign.

Closely related examples, all bearing the four-character reign mark that is characteristic of this group of dishes, are found in museums and collections around the world; see one in the Palace Museum, Beijing, illustrated in The Complete Collection of Treasures of the Palace Museum. Blue and White Porcelain with Underglazed Red (II), Shanghai, 2000, pl. 63; one in the Capital Museum, Beijing, published in Zhongguo taoci quanji, vol. 12, Shanghai, 2000, pl. 138; another in the Shanghai Museum, included in Wang Qingzheng, Underglaze Blue and Red, Hong Kong, 1993, pl. 116; and a fourth example in the Meiyintang collection, illustrated in Regina Krahl, Chinese Ceramics from the Meiyintang Collection, vol. 4, pt. I, London, 2010, pl. 1679. For the Xuande prototype see one excavated at the waste heaps of the Ming imperial kilns, published in Lu Minghua, Mingdai guanyao ciqi, Shanghai, 2007, pl. 3-119.

A dish of this design is shown on the sixth scroll of the Guwan tu (Imperial Collection of Yongzheng), dated to the sixth year of his reign (1728), which was sold in our London rooms, 19th May 1939, lot 62, and is now in the British Museum, London, from the Sir Percival David collection.