LONDON.- Sotheby’s London will present for sale a range of over 350 Fine Chinese Ceramics and Works of Art on 15 May 2013. The auction comprises an exemplary selection of important Chinese ceramics and jades, and will include a distinguished group of rare objects with exceptional provenance. The sale also features several notable collections, including Imperial Qing Ceramics and Works of Art from a Far Eastern Collection. In total, the auction is expected to realise in excess of £7.7 million*.

Robert Bradlow, Director, Head of Sotheby’s London Fine Chinese Ceramics and Works of Art Department, said: “We have carefully curated this sale to offer some of the finest examples of Chinese ceramics and works of art currently available to the market. The collection includes marvellous rarities, including a jade sceptre, a pair of ‘famille-rose’ vases and a ‘famille-verte’ bowl, all with outstanding provenances.” A White and Russet Jade ‘Longevity’ Ruyi sceptre, Qing Dynasty, Qianlong period, comes to the market with a provenance of historical importance. The ruyi sceptre was gifted to His Highness Maharaja Sir Padma Shumshere Jung Bahadur Rana of Nepal from Chiang Kai-shek (1887-1975), a military and political figure who was head of the Chinese Nationalist Government from 1928 to 1949, on the occasion when his highness became the Maharaja in 1945. Ruyi sceptres of this magnificent size, 42.5cm in length, are rarely fashioned in jade due to the scarcity of boulders large enough to make objects of such expansive dimensions. The quality of the jade in the present sceptre is exceptionally fine, with its even white tone further enhanced by minor russet staining. The detail lends a particularly naturalistic look to the stone. The high level of artistry and craftsmanship is evident in the quality of the carving and the decoration that has been carefully chosen for its auspicious connotations.

Ruyi sceptres represent the propitious expression ‘as you wish’. Their function is likely to have derived from hu tablets that were items of authority and social rank held in the hands of officials in ancient China. During the Qing dynasty, they became imperial objects that were bestowed by the emperor to his worthy officers and loyal subjects as rewards. Even foreign kings and ambassadors were presented with ruyi, including George III. The decoration of the five bats and the shou character on the head of the present sceptre, combined with the wan symbol and the beribboned qing on the handle together form the bestowal on the recipient of a ‘Long and Happy Life’, a fitting sentiment given its presentation to the Maharaja. Property of Princess Rama Malla of Nepal, the sceptre is estimated at £100,000-150,000. 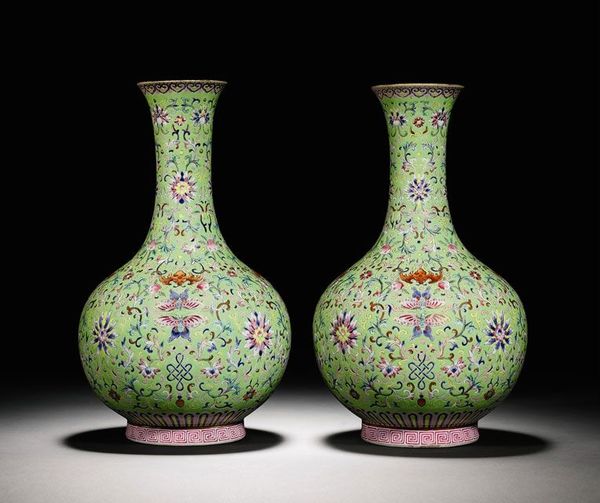 A Pair of Lime-Green Ground Famille-Rose Vases, Jiaqing Seal Marks and Period come to the market from Cluny Castle in Scotland. The pair of vases is estimated at £200,000-300,000. Photo: Sotheby's

A Pair of Lime-Green Ground Famille-Rose Vases, Jiaqing Seal Marks and Period come to the market from Cluny Castle in Scotland. The vases were acquired by Emily Gordon circa 1870 and have remained in the family ever since. Exquisitely painted and finely potted, they belong to a small group of Jiaqing mark and period wares that are favoured for the combination of their form and decoration. The motifs amongst the leafy floral scrolls suggest that the vases were produced as marriage gifts. The two facing butterflies represent a joyful reunion and marital happiness, the bats are a pun for blessings, the endless knot represents continuity, and the peaches symbolise longevity. Brightly enamelled against a lime-green ground, the intricate composition forms an auspicious design that would have held a deep resonance for couples embarking on a lifelong marital commitment. The pair of vases is estimated at £200,000-300,000. A group of Imperial ceramics and works of art from a Far Eastern Collection, comprising 19 lots, is highlighted by A Fine and Rare Coral-Ground Famille-Verte Bowl, Kangxi Yuzhi Mark and Period. The bowl belongs to a small but well-known group of vessels that closely follow the design painted in the characteristic wucai palette of the Kangxi period, known in the West as the famille-verte. These vessels were decorated and enamelled at the imperial kilns at Jingdezhen in Jiangxi province. The design seen on the present bowl continued to be popular throughout the Qing dynasty. The exterior is freely decorated with flowering blooms, including peony, lily, camellia, and crabapple, in shaded tones of blue, pale-yellow, lime-green and lavender, against a rich coral-red ground. The bowl is estimated at £150,000-200,000. 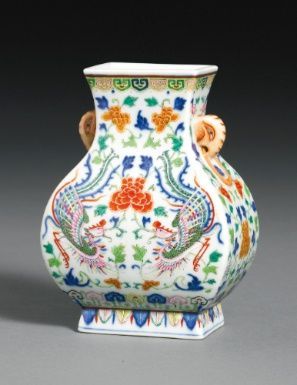 A Fine and Rare Underglaze-Blue Polychrome Enamel ‘Phoenix’ Vase, Fangu, Qianlong Seal Mark and Period comes to the market from the same collection. It is rare to find vases of this form and decoration; a closely related example, possibly the pair to the present piece, was sold by Sotheby’s in London in 1953. The decoration of a pair of flying phoenix confronting a flaming pearl above a peony bloom may be found on Qianlong mark and period wares of different shape. In the present example, the pear-shaped body rises from a spreading foot to a waisted neck, flanked by a pair of elephant handles suspending fixed rings. It is estimated at £80,000-120,000.