The Picture Gallery at Sanssouci Park in Potsdam near Berlin.

While the building itself has remained largely unchanged, the inventories of painting and sculpture have experienced serious changes since 1786. These include art theft that took place at Napoleon’s command in 1806, a redistribution of works of art connected to the founding of a Royal museum (Altes Museum) on the Lustgarten in Berlin in 1830, as well as numerous losses suffered toward the end of World War II, in 1945. In spite of extensive returns, to this day the gallery’s history is characterized by a constant attempt to adequately rebalance its losses.

Now, 250 years after the completion of the Picture Gallery, and 184 years after relinquishing many of its paintings and ancient sculptures, the original impression of Frederick the Great’s Picture Gallery can be re-experienced. Loans from both the Classical Antiquities and Sculpture Collections of the Staatliche Museen zu Berlin, as well as from the National Museum in Poznan, a visual reconstruction of the Frederician hanging scheme for the paintings (in the display cases), and the dense hanging arrangement of the paintings in the smaller gallery (Cabinet) make this possible.

The extant inventory and installation remain on view, allowing for a trip through time that spans more than 250 years.

THE PICTURE GALLERY AS A SYNTHESIS OF THE ARTS 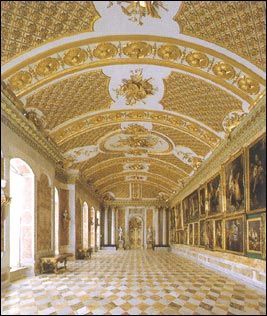 The Picture Gallery is more than a magnificent shell for a painting collection. It represents a unique synthesis of the arts in which architecture, painting, sculpture and the decorative arts enter into dialogue with each other, forming a compendium of the arts.

The rich, gilded stucco decorations of the ceilings in the interior present allegories of the arts of painting and sculpture. Diverse variations on these themes were created by Johann Michael Merck (1714–1784) for the gallery to the west, and by Carl Joseph Sartori (1709–1770) for the gallery to the east. Frederick II wanted “absolutely nothing else but ancient marble” for the wall paneling of the galleries and had giallo antico – a very rare, bright yellow marble – procured for it from classical buildings. The diamond shapes used in the floor consist of white Carrara marble and giallo di Siena, or brocatello di Montarrenti, a yellow marble that was found near Siena. The floor was faithfully reconstructed in 1996. The central Domed Hall received a richly ornamented marble floor made of Florentine mosaic by Melchior Kambly (1718–1783) and Nathanael Eppen (died 1786).

The most precious materials and highly-talented craftsmanship created a formidable counterpart to the paintings, frames, encrusted wall tables and sculptures, whose selection and arrangement provide further insights into the mind of Frederick II. In addition to a pleasurable experience and stroll through the Picture Gallery, it was possible for viewers to engage in learned discussions about diverse aspects of art. THE WORKS OF ART IN THE ROOM

At first glance, the arrangement of the works of art in the Picture Gallery does not stand out from that of other royal collections from the same period. The paintings were hung in a Baroque style, filling the walls. Sculptures were placed in relation to the architecture and arranged symmetrically or in rows: at the sides of the doors, as supraporte (overdoors), on wall tables or on consoles on the walls. In this manner the works of art were incorporated into each room’s respective interior decoration.

The extraordinary differences can only be read by taking a closer look, which allows the carefully thought out, ingenious underlying concept to be perceived.

Paintings and sculptures have been subjected to an ordering system based on classification, which presupposes a deep understanding of art. The comparison of genres, schools and artists with one another was a central principle. Paintings by different schools were displayed strictly separately for the first time, as is customary in museums today. While major works of 17th century Flemish and Dutch painting filled the western wing and the gallery’s central building, the eastern wing exhibited Italian paintings from the High Renaissance and the Baroque periods.

Antiquity and modern times are juxtaposed in the classical and French sculptures. Human history is presented through the portrait busts, alongside ancient myths that are personified in statues of the gods. The sensuous and playful small statues on the wall tables counterbalance the seriousness of this arrangement. All the works find their echoes in the paintings on the walls. As early as 1742, King Frederick II purchased a collection put up for sale that had belonged to a cardinal with an ardent appreciation for art, Cardinal Melchior de Polignac (1661–1741), who had acquired the works in Rome from 1725–32. For the price of 300,000 livres, the young king suddenly owned 300 sculptures, pedestals and tabletops, among which he carefully chose a selection for his newly created palace interiors and for sections of his gardens.

The estate of Wilhelmine of Prussia, Margravine of Brandenburg-Bayreuth (1709–1758) was added in 1758. Frederick’s favorite sister had also acquired numerous ancient and modern sculptures, as well as pieces of marble, during her trip to Italy in 1755, which she bequeathed to her brother. Both siblings had shared an avid interest in classical literature, architecture and in collecting objects, which is reflected in their correspondence.

The sculptures that Frederick chose for the Picture Gallery are placed parallel to their historical installation sites in this exhibition. Their original settings can be easily imagined and reconstructed, making it possible to visually recreate the condition of the gallery during the Frederician era, nearly in its entirety.

In 1757, Frederick II summoned Matthias Oesterreich (1726–1778) to Potsdam from Dresden. The inspector of the Picture Gallery published its first hanging arrangement in 1763. It initially contained only the paintings in the main galleries – the works in the Gallery’s two wings, as well as in the central, Great Salon of the Gallery. In the Picture Gallery’s first catalogue, published in 1764, the paintings exhibited in the Cabinet (a smaller gallery located to the east) had been incorporated as well. Further, enhanced and expanded hanging schemes and catalogues were published in German and French in the years to follow, which allow changes in the inventory to be traced. The sculptures on display were included for the first time in a volume dating from 1773.

A two-volume collection of engravings conceived by Oesterreich, which intended to include engraved reproductions of the paintings, was only realized in part, most likely due to financial reasons and a lack of support from Frederick II. Oesterreich made an effort to pass on the level of knowledge known at that time and he also provided his own assessments. Even if these did not always meet with the approval of his contemporaries, his publications are still a vivid reflection of the history of scholarship, while also providing a basic source on the historic interior design and installations of Frederick II’s palaces and gardens.

Frederick II changed the main emphasis of his collection during the Picture Gallery’s planning stage. Although he had collected works by Watteau’s circle in his youth, he was now interested in large-scale paintings by the Old Masters, and primarily history paintings. His aim was to situate himself at the forefront, alongside the major collectors of his times. Only the most famous artists were to be represented – including Rubens, van Dyck, Raphael, Correggio and Titian. In this case, it was particularly important to the king that he purchased the paintings himself, instead of having inherited them.

Within a very brief period, Frederick had acquired an extensive painting inventory for his gallery. Works of art were bought in Italy, Paris and the Netherlands. The king was supported by agents and art dealers. Purchases were made at auctions of high-caliber European collections. Among other sources, paintings were acquired in 1755 and 1756 from the Parisian collections of Louis Pasquier and Marie Joseph d’Hostun Duc de Tallard, and in 1763 from Willem Lormier’s collection in The Hague. However, sales from German art collectors and art dealers also enriched the inventory of the Picture Gallery. The Berlin merchant and dealer Johann Ernst Gotzkowsky brought together the largest portion of the collection.

The king continued to pursue his aims even in times of crisis during the Seven Years’ War. He defined the gallery’s composition and had fixed ideas about which artists and subjects should be represented. Although he gave instructions not to purchase paintings for very large amounts if possible, high prices were nevertheless paid for individual paintings. For example, he paid more than 21,000 livres (more than 4,800 thalers) for Correggio’s Leda and 20,000 livres (more than 4,600 thalers) for Rubens’ St. Cecilia – the largest sum paid for a painting at its auction. Frederick II invested 20,000 florins in the purchase of three altarpieces by van Dyck from the Abbey Ter Duinen in Bruges. Frederick also paid high prices for small-scale works by Adriaen van der Werff, numerous examples of which the king assembled together for the smaller gallery called the Cabinet. They represented popular collectibles in the 18th century, whose prices even surpassed those for some of Rubens’ paintings.

Frederick II spared neither money nor effort in order to juxtapose contemporary French sculptures with the classical works chosen for the Picture Gallery. In 1755, he commissioned four statues of Diana, Apollon, Mars and Venus from the sculptors Paul-Amboise (1702–1758) and Michel-Ange Slodtz (1705–1764), Lambert Sigisbert Adam (1700–1759) and Guillaume Coustou the Younger (1716–1777), each of whom were highly regarded in France at that time.

Despite the deaths of the Slodtz Brothers and of Adam, the subject scheme and commissions were continued by other sculptors. A drawing preserved at Berlin’s Museum of Prints and Drawings supplies us with an indication of the conceptual intensity with which this plan was carried out. It shows the design for a version of Jean-Baptiste Lemoyne’s statue of Apollo that was never realized. Apparently several drafts were presented to the royal patron and the “assigned” (initialed) drawing went back to the sculptor for the work’s execution.

In the end Jean-Baptiste Lemoyne completed the Apollo, Louis-Claude Vassé (1717–1772) the statue of Diana and Coustou the Younger the statues of Mars and Venus. The transportation and installation of the sculptures first occurred in 1771; and was certainly delayed by the completion of the Apollo. 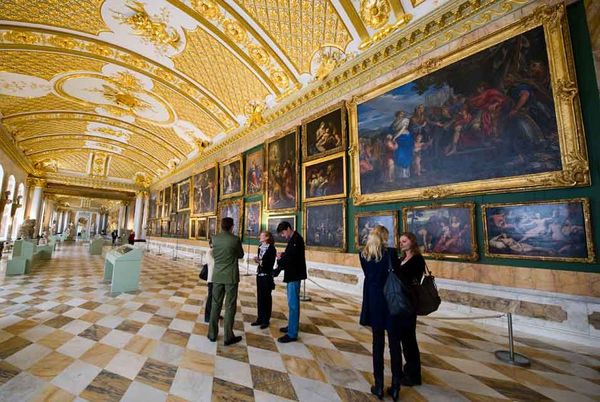 Journalists preview the exhibition "The Most Beautyful Gallery - Revisiting the Picture Gallery of Frederick the Great" at the Picture Gallery at Sanssouci Park in Potsdam near Berlin. The exhibition running from May 9 to October 31, 2013 is organised on the occasion of the gallery's 250th anniversary. The luxurious gallery building was constructed from 1755 to 1764 to host the art collection of Prussian King Frederick II. In addition to paintings from Frederick's original collection, paintings from other Prussian palaces are also included in the museum's permanent exhibition. Among the highlights are Caravaggio's "Doubting Thomas," Anton van Dyck's "Pentecost" and works by Peter Paul Rubens. AFP PHOTO / OLE SPATA. Visitors walk past the statue of a muse on display at the exhibition "The Most Beautyful Gallery - Revisiting the Picture Gallery of Frederick the Great" at the Picture Gallery at Sanssouci Park in Potsdam near Berlin. The exhibition running from May 9 to October 31, 2013 is organised on the occasion of the gallery's 250th anniversary. The luxurious gallery building was constructed from 1755 to 1764 to host the art collection of Prussian King Frederick II. In addition to paintings from Frederick's original collection, paintings from other Prussian palaces are also included in the museum's permanent exhibition. Among the highlights are Caravaggio's "Doubting Thomas," Anton van Dyck's "Pentecost" and works by Peter Paul Rubens. AFP PHOTO / OLE SPATA.