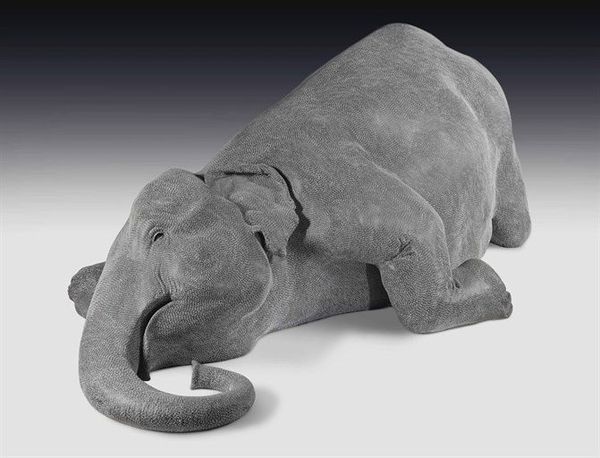 Provenance: Collection of the artist
Private collection
Acquired from the above by the present owner

Notes: This lot was not consigned by CCF Community Initiatives Fund to benefit The Leonardo DiCaprio Foundation. Rather this lot was consigned by a separate consignor who will be donating a portion of the sale proceeds to CCF Community Initiatives on behalf of The Leonardo DiCaprio Foundation. A buyer who purchases this lot will not be eligible for any charitable contribution deduction in relation to such purchase.

In The Skin Speaks a Language Not its Own, the female elephant appears prone and vulnerable, away from her herd, as though subjugated and ready for death. Is she the victim of violence? Or is she being weighed down by the multitudinous bindis swarming on her skin, which themselves recall the crowds of India's largest cities in rush hour immortalised in so many photographs and movies?

The bindis embody much of the change that is occurring in India. While the bindi has long been a facial adornment linked to religion and enlightenment, in a form occurring during Hindu marriage when the groom smears red paint on the hairline of the bride, it has now been subject to a commercial transformation, appearing in shops in a new incarnation as mass-produced stickers, rather than marks made individually by hand. In The Skin Speaks a Language Not its Own, these bindis make up elaborate, decorative patterns on the creature's skin, while also invoking that clash between commerce and culture that is occurring in so many places in the world, which is often considered an advance, and yet which so often comes at great cost as traditions, beliefs and old ways are abandoned. Kher has a distinct perspective when it comes to India, as she is a relatively rare 'reverse migrant'-she left Great Britain, where she was born and educated, in her early 20s, 'returning' to a country with which she was related and yet which she had not visited for almost two decades. Coming from the West to the turbulent maelstrom of booming India, Kher was able to experience and explore the changes that have resulted in so much societal change and upheaval as the Indian economy and its international links have grown.

While some changes have occurred at a vast pace, others have been slower: cars, computers and mobile phones may proliferate, yet there has been less liberalisation of gender roles than might be expected, as some traditions and traditional views have remained entrenched. The sperm-like appearance of the bindis introduces another level of dialogue regarding the roles of men and women in modern Indian society: perhaps the title implies that, regardless of what the she-elephant desires, sperm and phallocentricity prevail. The crouching pose of the elephant and the anthropomorphic projection that is caused by the viewer's empathy ensure that the animal acts as a substitute for the female body, tapping into the gender dialogue which Kher has explored in many of her works. As a female artist working in India, Kher is acutely aware of the various ambiguities and difficulties being faced on many of the country's fronts. The elephant in The Skin Speaks a Language Not its Own appears to embody the plight of women and also India itself: it is a timeless symbol intrinsically linked to the culture, beliefs and religion of that country.

In India, most of the elephants roam wild, yet many are still feted in festivals, kept in temples, worked in fields. Despite the mechanisation so commonly linked to the process of modernisation, in some places, the elephants continue in their ageless, ancient roles, be it in forests or rituals. They are often associated with Ganesha, the elephant-headed god of Hindu religion whose immense popularity, in part through his role as Lord-and Remover-of Obstacles, has seen his images proliferate throughout Asia and beyond.
Yet to the Western eye, they remain exotic, symbols of the romance of the Subcontinent reminiscent of the age and writings of Rudyard Kipling. They therefore perform a complex function as symbols of India's colonial past - a past to which Kher, as a British-born Indian, is inextricably linked.

Commentaires sur Bharti Kher (b. 1969), The Skin Speaks A Language Not Its Own