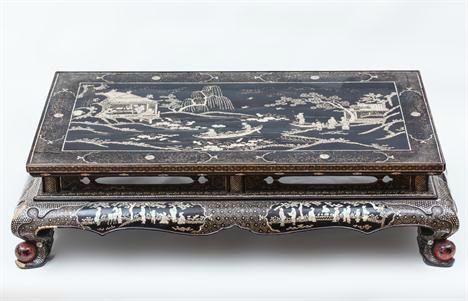 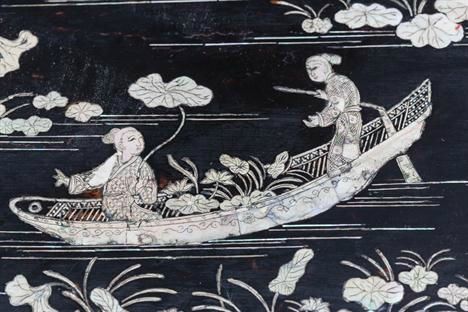 An extraordinary small table with a flat surface, lateral rounded bands with shell-shaped carving, and curved feet containing a red lacquered globe. The whole surface is covered with black lacquer on which numerous tiny mother-of-pearl flakes create a decoration with figures, glimpses of landscape, geometric and plant patterns. Note that some inlay works are missing. 20,4 x 82 x 49 cm. Estimate: €€5,000 - €7,000

Objects in lacquered wood with mother-of-pearl inlays were already being produced during the Tang and Song dynasties. It was during the Yuan dynasty that this technique was perfected. Cao Zhao wrote about it in his “Geguyaolun” (“Essential Criteria of Antiquities”) in 1388, in which he explained that this kind of object was already very successful at that time, despite its high price. Wang Zuo, curator of the 1462 version of the “Geguyaolun”, specified that these objects were produced in the area of Jian in the province of Jiangxi, a district where also Yan Mao and Zhang Zheng – two famous craftsmen specialized in inlay works with mother-of-pearl flakes – had worked in the 14th century. Due to its shape and decorative style, this wonderful small table can be dated to the second part of the Ming dynasty. It is a refined and beautiful piece of furniture that fully preserves the best qualities of this peculiar and sophisticated of lacquer decoration technique.