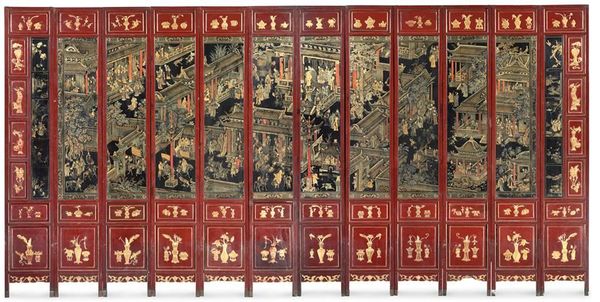 Depicting various courtly pursuits including an Emperor with dancers, ladies at their toilette and scholars gatherings all within relief-carved scarlet and gilt panels of stylized fretwork and auspicious symbols, the reverse carved with a lengthy inscription; 133 in. (333 cm.) high, 22 in. (56 cm.) wide, each panel. Estimate $12,000 – $18,000

Notes: The inscription indicates that this is a 'birthday screen' presented to a man named Hu, on the occasion of his sixtieth birthday. The text of the inscription was composed in 1783 by a fellow civil official, Xiao Zhongguang, who, in describing his own background, mentions that he himself has passed both the juren (provincial) and the jinshi (capital) examinations.