HANOI - In celebration of the Japan – Vietnam Friendship Year 2013, the Japan Foundation Center for Cultural Exchange in Vietnam proudly present the best of Japanese contemporary art exhibition “YAYOI KUSAMA: Obsessions” from Saturday 25 May to Sunday 28 July 2013 in Hanoi.

Yayoi Kusama, a Japanese avant-garde sculptor, painter and novelist, has received the National Lifetime Achievement Awards in 2006 but is still, or even more, hyperactive to create new art works.

In her over 7 decades-career as an artist, Kusama has worked in a variety of media, including painting, drawing, sculpture, film, performance and installation. Having continuously innovated and re-invented her style, Kusama’s obsessive repetitions and patterns of dots have been widely celebrated and become her trademark.

Kusama has received numerous awards including the Order of Arts and Letters (2003/France), the Order of the Rising Sun (2006/Japan), the Praemium Imperiale (2006/Japan) and has recognized as the Person of Cultural Merit (2009/Japan).

It is consequently quite natural that her artworks fetch around 4,000,000 – 6,000,000 USD at recent auctions, the highest price as an active female artist in the world.

Yayoi Kusama, however, regardless of being extremely highly established, never stops being avant-garde and goes forward to explore new possibilities in a new environment; this time – in Vietnam.

Kusama will occupy the site of the Japan Foundation Center for Cultural Exchange in Vietnam (27 Quang Trung, Hoan Kiem, Hanoi) with a variety of her famous immersive installations.

The main exhibition hall will be turned into a room for the installation “Dots Obsessions” in which you can enjoy Kusama’s one of the most popular installations with mirrors and dots balloons.

Last but not least, the small kitchen room in the appendix building will be dedicated for the relatively new installation “I’m Here, but Nothing” where you can experience the illusive confusion of two and three dimensions with dizzy illuminated dots. A girl plays at the Guidepost to New Space installation by Japanese artist Yayoi Kusama at her exhibition titled Yayoi Kusama - Obsessions. The exhibition is the first one for Kusama, who is known as the polka dot queen of avant garde art. REUTERS/Kham A student stands inside the installation Dots Obsessions by Japanese artist Yayoi Kusama at the Obsessions exhibition held at the Japanese Foundation centre in Hanoi on May 28, 2013. The exhibition is part of celebrations of the Japan-Vietnam Friendship Year 2013. 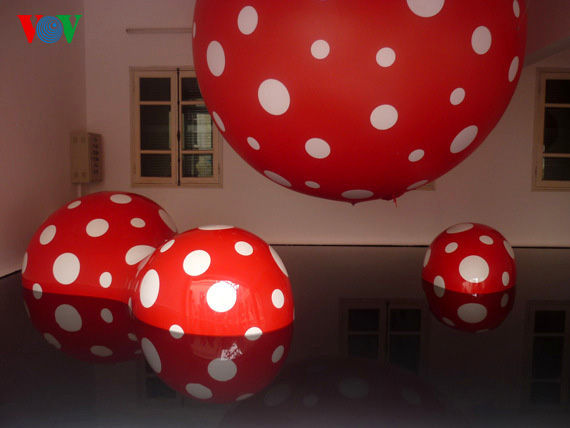 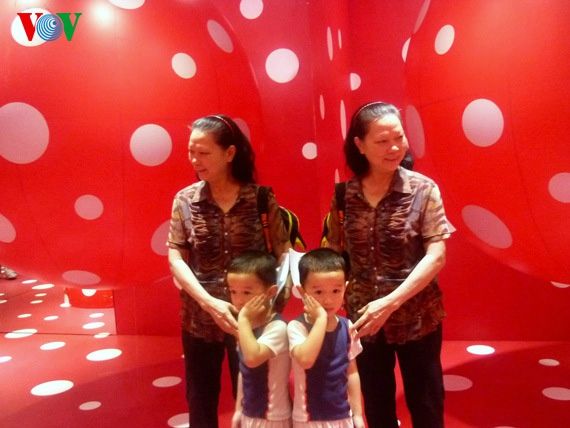 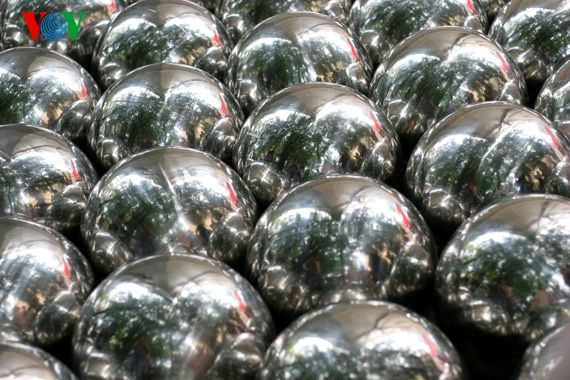 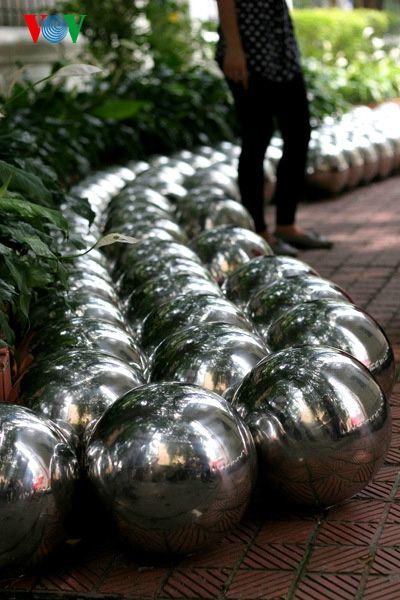 A man walks among 1,500 silver balls from the installation Narcissus Garden by Japanese artist Yayoi Kusama at the Obsessions exhibition held at the Japanese Foundation centre in Hanoi on May 28, 2013. The exhibition is part of celebrations of the Japan-Vietnam Friendship Year 2013. AFP PHOTO/HOANG DINH Nam.