Breguet. A fine and rare 18ct gold open face automatic pocket watch with power reserve, made for the Designer and Illustrator, Paul Iribe, together with Breguet Extract from Archives stating the watch was sold to him for the sum of 10,800 francs. Sold for £26,250. Photo courtesy Bonhams

The 18ct gold open-face automatic Breguet pocket watch was sold to the Frenchman in 1933, the year he collaborated with Chanel on an extravagant jewellery collection, for 10,800 francs.

Paul Iribe (1883-1935) is acknowledged as having been a leading influence on Art Deco style. First known for his political caricatures in Parisian journals and satirical newspapers, Iribe then spent a number of years in Hollywood working on film sets before returning to Paris in the early 1920s, where he met Coco Chanel (1883-1971), founder of the iconic Chanel brand of clothing, jewellery and fragrance.

Iribe's affair with Chanel is widely thought to be behind the break-up of the artist's second marriage, to heiress Maybelle Hogan, in 1928. Many of his subsequent drawings and political publications would feature Chanel's likeness, re-imagined as Marianne – the symbol of French freedom. Although Chanel was known to have had a number of romances during her early career, her relationship with Iribe was said to have been one of the most significant of her life.

In 1933 – the year Iribe bought this watch – the pair collaborated in the design of an extravagant jewellery collection commissioned by the International Guild of Diamond Merchants. The Bijoux de Diamants Collection was executed almost entirely in diamonds and platinum, and inspired by the triple themes of knots, stars and feathers. When exhibited in Chanel's home in the Rue du Fauborg-Saint-Honoré in Paris, it drew enormous crowds.

Sadly Iribe would pass away just two years later, collapsing while playing tennis at Chanel's villa on the French Riviera in September 1935. This watch is known as the "Kampfschwimmer" as the German military divers used them during activities in the Second World War. The Ref:3646 was produced in various versions from 1938 until the 1950's. It is not documented exactly how many of these watches were delivered to the German "Kriegsmarine" (Navy). The Ref:3646 initially utilised a Rolex dial, also called the "California Dial" which had one half with Arabic indices and the other half with Roman. Panerai later replaced these dials and began using the self-illuminating dials with Radiomir/later Luminor material. Provenance: This watch was given to the current vendor's father by a German prisoner of war in Italy in 1944, while serving in the Royal Engineers bomb disposal unit.

An impressive single-owner collection of 130 pocket watches and eight clocks was 97 per cent sold, and doubled its pre-sale estimate to realise a total of £489,900. The private English collection, which was amassed between the 1930s and 1962, spanned a period in watch and clock-making from the early 1600s to the mid-19th century. 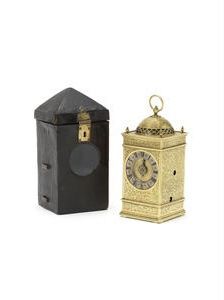 A very similar instrument was made by Hans de Vals, clockmaker to the Royal household and to Philip II of Spain between c.1558 and 1598. He supplied clocks to the Spanish court which were used as diplomatic gifts, including an example given to the first Tokugawa Shogun in 1611 for the hospitality shown by the Japanese to survivors from the Spanish galleon San Francisco which was carrying the acting Governor of the Philippines. That clock is believed to have been the first mechanical clock in Japan. Meanwhile Lot 188, a very rare 14ct gold keyless wind full hunter Waltham pocket watch gifted to the Captain of the British tug boat Champion in 1919 by Woodrow Wilson, the 28th President of the United States, sold for more than double its estimate at £5,000. Henry William Webster was awarded the watch by the President in recognition of his ship's assistance of the US vessel Piave when it ran aground on Goodwin Sands in the English Channel on 31st January 1919. The watch was presented in a polished case with United States of America Presidential insignia, and commemorative engraving.

Paul Maudsley, Head of the Bonhams Watch Department, said: "The first of our two annual Fine Watch and Wristwatch sales at New Bond Street was a resounding success, with many international bidders, both on the telephones and in the packed sale room. We also had the most live internet bidders for a sale in New Bond Street.

"We now look forward to our next sale in Knightsbridge on 3rd September, and of course our end-of-year sale at New Bond Street on 18th December."