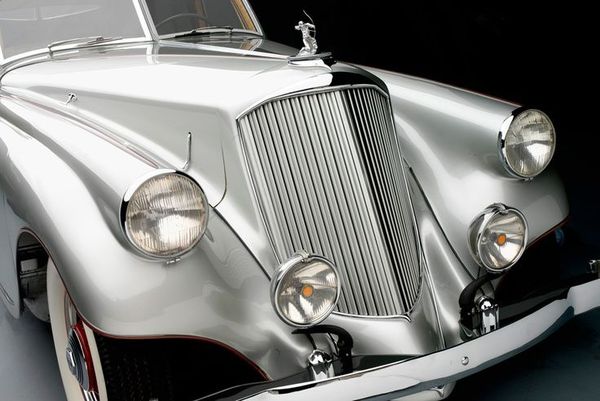 NASHVILLE, TENN.- This summer, the Frist Center for the Visual Arts presents Sensuous Steel: Art Deco Automobiles, an exhibition of unique and luxurious autos from the 1930s and ’40s. Sensuous Steel includes 18 automobiles and two motorcycles drawn from some of the most renowned car collectors and collections in the world. Organized by Guest Curator Ken Gross, former director of Petersen Automotive Museum, Los Angeles, the exhibition is on view from June 14 through September 15, 2013.

While contemporary automotive manufacturers often strive for economy and efficiency, there was a time when elegant design and luxury reigned. Like the Frist Center’s historic building, the automobiles included in Sensuous Steel display the classic grace and modern aesthetic of Art Deco design. An eclectic, machine-inspired decorative style that thrived between the two world wars, Art Deco combined craft motifs with industrial materials and lavish embellishments. The movement began in Paris in the early 1920s and was propelled to prominence with the success of the International Exhibition of Modern Decorative and Industrial Arts in 1925. Automakers embraced the sleek iconography of motion and aircraft-inspired materials characteristic of Art Deco, creating memorable automobiles that still thrill today.

“Sensuous Steel is the first major museum exhibition devoted entirely to Art Deco automobiles, and the Frist Center’s landmark Art Deco building, which was completed in 1934, is the perfect venue to showcase these exquisite works of art and enrich the experience for our visitors,” notes Frist Center Executive Director Dr. Susan H. Edwards. “Art Deco styling influenced everything from architecture to the design and manufacture of passenger trains and luxury ocean liners, furniture, appliances, jewelry, objets d’art, signage, fashionable clothing, and, of course, automobiles.

The works in this exhibition convey the breadth, diversity, and stunning artistry of cars designed in the Art Deco style.”

“Rapidly changing and ever-evolving, the automobile became the perfect metal canvas upon which industrial designers expressed the vital spirit of the interwar period,” explains Guest Curator Ken Gross. “To give the illusion of dramatic movement and forward thrust, cars of the 1930s and ’40s merged gentle curves with angular edges. These automobiles were made from the finest materials and sported beautifully crafted ornamentation, geometric grillwork, and the elegant miniature statuary of hood ornaments. The classic cars of the Art Deco age remain today as among the most visually exciting, iconic and refined designs of the twentieth century.”

Among the automobiles included in Sensuous Steel are: 1929 Cord L-29 Cabriolet- Designed by Alan Leamy who is known for styling the famed Auburn Speedster, the Cord L-29 Cabriolet was the first U.S. front-drive luxury car. It was painted its notable burnt orange color by its former owner, Frank Lloyd Wright. 1937 Delahaye 135 MS Roadster by Figoni and Falaschi- Created for the 1937 Paris Auto Show, this car was called “a Paris gown on wheels.” The roadster features aluminum coachwork and a leather interior by Hermès. Most significant are four features that were patented by Figoni and Falaschi, which included a roll-down, disappearingwindshield. 1934 Edsel Ford Model 40 Speedster- Designed by E.T. “Bob” Gregorie specifically for Edsel B. Ford, the speedster features a two-seater aluminum alloy body patterned after an Indy race car. It is the only one of its kind ever made. 1934 Pierce-Arrow Silver Arrow Sedan- Designed by Phillip Wright, the Arrow Sedan was originally built for the Chicago Century of Progress Exposition (1933-34). This car was the epitome of luxury with a price tag of $10,000 (roughly $170,000 today). Only five of these sedans were made, with three of them extant.