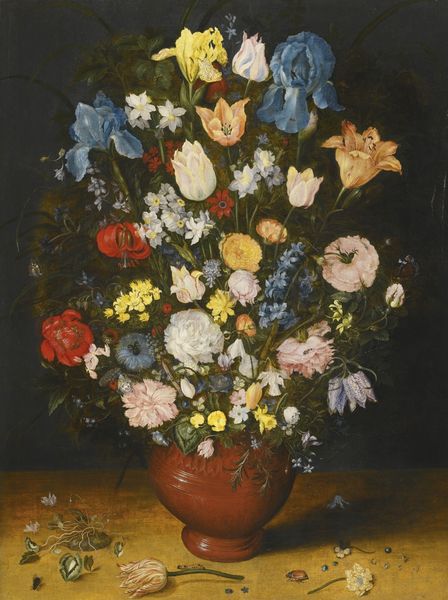 PROVENANCE: Miss Emily Charlotte Mansel Talbot of Margham (d. 1918);
By inheritance via her niece until anonymously sold ('The Property of a Gentleman of Title'), London, Sotheby's, 6 December 1989, lot 20, for £550,000 (as Jan Brueghel the Younger).

NOTE: This magnificent bouquet of large blue and yellow irises, an array of tulips, roses, narcissi and other wild flowers, is an autograph version of one of Jan Brueghel the Elder’s best-known compositions.  Executed by Brueghel in 1607-8 concurrent with, or shortly after, the small version in the Kunsthistorisches Museum in Vienna (51 by 40 cm.), it is one of Brueghel’s earliest works and thus constitutes a highly important addition to his oeuvre.1 The composition is typical of the years 1605-10 when Brueghel painted a small number of similarly composed bouquets emanating from ceramic vases. All of these are characterized by the exposed ground layer in between the blooms that we see in the present work, as well as by an exceptionally high level of execution in the blooms themselves. Most, too, were ‘finished’ by a talented assistant and in this painting it is possible that the loose flowers and stalks lying on the ledge are such an example.

Dendrochronological analysis has been carried out on the panel support which consists of two oak planks, one cut from an Eastern Baltic oak felled circa 1596, the other from a western European oak felled sometime after 1578. The dating is calculated by establishing the precise date of the most recent heartwood ring before adding the minimum number of sapwood rings agreed upon by dendrochronologists (it is the same for both Baltic and Dutch oak), currently eight. So the Eastern Baltic plank, being the most recent, allows us to interpret aterminus post quem for the painting: its most recent heartwood ring dates to 1588, to which we must add the minimum  number of sapwood rings, leaving us with an earliest possible felling date of 1596. Allowing for shipment and seasoning, as well as the possibility of a greater number of sapwood rings than the minimum eight, this fully supports the dating of the painting to circa 1607-8.

The painting was inspected in the original in December 2012 by Drs. Fred G. Meijer of the Rijksbureau voor Kunsthistorisches Documentatie, The Hague. Drs. Meijer considers this a fully autograph painting by Jan Brueghel the Elder.

Critics and collectors alike admired Jan Brueghel's flower pieces from their very inception, and their popularity has never waned. In analyzing his works, art historians have classified Brueghel's flower paintings on the basis of the containers the flowers are in, the size and number of flowers, the construction of the arrangement, etc. However, what is most striking in the end is the artist's extraordinary inventiveness and skill. Although Brueghel sought the very rarest flowers, he uses certain common blooms - tulips, irises and roses - to anchor his bouquets. This probably reflects his patrons' wishes and the popularity of these flowers, as well as compositional considerations. However, despite the repetition of motifs, each work has a remarkable freshness and vitality of its own.

A great deal has been written about the place of the flower piece in northern art, and it will undoubtedly continue to be a much debated subject. In 1999 Alan Chong and Wouter Kloek convincingly argued that flower pieces should not be seen as allegories of transience filled with hidden meanings but as depictions of the natural world.2 They were not, however, simple copies from nature, but selected and composed by the artist himself. In a letter of August 1606 to Cardinal Federico Borromeo, Brueghel writes of the Large Bouquet in Milan (with which incidentally the present work shares a number of blooms):3

...[in] the painting of the flowers all made from life in this picture, I have invested all my skill. I do not believe that so many rare and different flowers have ever been painted before, nor finished with such diligence: it will be a fine sight in the winter. Some of the colors are very close to the real thing.4

His emphasis is on his own skill, the rarity and abundance of the works and realistic nature of the painting. As Chong points out, this joy in his ability to copy nature reflects a contemporary view of nature and art that may ultimately derive from Erasmus:

Moreover, we are twice pleased when we see a painted flower competing with a living one. In one we admire the artifice of nature, in the other the genius of the painter, in each the goodness of God.5

This outlook formed the basis of Kunst- und Wunderkammern, those collections of rare and wonderful objects, both natural and man-made, which were so popular in the late sixteenth and seventeenth centuries. In their richness and multiplicity, they reflected the glory of God whether in the natural world or through the intermediary of his servant - man. Brueghel's Still life with irises, tulips, roses, narcissi and fritillary in a ceramic vase was a testament to the wonders of nature and Brueghel's astonishing skill, and a reflection of the divine presence in the earthly sphere.