"Fashion Jewelry, The Collection of Barbara Berger" at Museum of Arts and Design

"Fashion Jewelry, The Collection of Barbara Berger" at Museum of Arts and Design Portrait of Barbara Berger, the world's most prolific collection of costume jewellery.

NEW YORK, NY.- Fashion Jewelry: The Collection of Barbara Berger is an eye-opening presentation of necklaces, bracelets, and earrings, many of them one-of-a-kind, drawn from the world-renowned collection of Barbara Berger. Featured designers include Kenneth Jay Lane, Lanvin, Missoni, Oscar de la Renta and Pucci. The exhibition is on view at the Museum of Arts and Design from June 25 through September 22, 2013 (a portion of the exhibition will remain open until January 20, 2014).

"Costume jewelry is not made to give women an aura of wealth, but to make them beautiful."— Coco Chanel

Popularized by fashion icons such as Elsa Schiaparelli and Coco Chanel, costume jewelry took off as an art form in its own right in the post-World War II era. As the European couture houses returned to business, the increased availability of synthetic gemstones and sparkling crystals opened up a spectrum of new design possibilities, allowing designers to produce even more vibrant and elaborate creations. At the same time, the market and appeal for costume jewelry began to grow. After years of wartime austerity, women developed an appetite for luxury, fantasy, and exuberance. And with the relatively modest prices of costume jewels (compared to gemstones and precious metals), women were able to acquire multiple pieces, for daily wear as well as for evening, and to layer many accessories together in the chic, over-the-top style epitomized by Chanel.

From swans and starbursts to feathers and flowers, the couture jewelry in Fashion Jewelry: The Collection of Barbara Berger presents a stunning array of extravagant pieces that not only celebrates the heritage of costume jewelry, but the creativity of brilliant designers and craftsmen across five decades of high fashion. The exhibition underscores the continuing popularity of couture jewelry today through stellar contemporary works from designers such as David Mandel, Iradj Moini, Robert Sorrell, Daniel Von Weinberger and Lawrence Vrba.

"Barbara Berger's extraordinary collection features over four thousand pieces, by more than eighty designers, and represents over fifty years of collecting," says David McFadden, William and Mildred Lasdon Chief Curator at the Museum of Arts and Design. "We are delighted to display a rich assortment from this dazzling collection, a virtual encyclopedia of this exciting and provocative era of fashion history."

The daughter of an American diamond merchant, Barbara Berger began her collection of bijoux de couture when she purchased a pair of Chanel earrings at a French flea market as a teenager. Since then, she went on to assemble one of the largest and finest collections of couture jewelry in the world comprising of around 4,000 pieces. Many of the works were made expressly to be worn with haute couture pieces by fashion designers like Chanel, Yves Saint Laurent, and Dior.

Influenced by the high style of New York City, where she spent her youth, and the vivid colors of Mexico City, where she makes her home, she continues to add to her collection with an unerring eye. Ms. Berger will generously donate selected works from her collection to MAD's permanent holdings of modern and contemporary jewelry.

"To talk about collecting costume jewelry is to talk about life, style, heart, and passion. Collecting is a treasure hunt, and completing my collection has been one of the highlights of my life," said Berger. "My collection features what's interesting to me – extraordinary, unique designs imbued with fantasy and a sense of humor. It's usually love at first sight."

Fashion Jewelry is being presented in an elegant installation that celebrates this glorious jewelry. The first section in MAD's jewelry gallery surveys the range of designer works by the American and European houses, including Chanel, Balenciaga, Maison Gripoix, Marcel Boucher, Miriam Haskell and Trifari, to name a few. This showcases not only the historical relationships between the houses and their designers, but also reveal their distinct signature styles and motifs. This section of the exhibition will remain on view through January 11, 2014.

In the main gallery, work is being presented thematically, with pieces variously arranged by subject, material, geography, color and motif. From flora and fauna, to rhinestones, gold and resin, this section will be on view through September 22, 2013.

"This exhibition is the most important presentation of fashion jewelry the world has seen in decades," says guest curator, Harrice Miller. "Barbara Berger's passion for collecting beautiful objects combined with her connoisseur's eye has resulted in an extravagance of treasures." 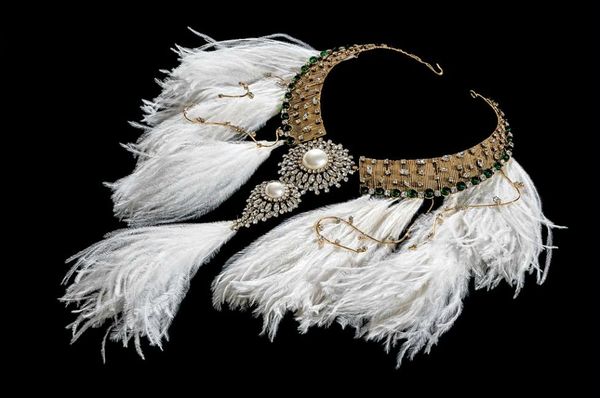 Coro gold-plated sterling-silver “Willet” tremblant bird brooch with coloured enamel and rhinestones from 1944. The head is on a spring and shakes when moved. © Pablo Esteva. 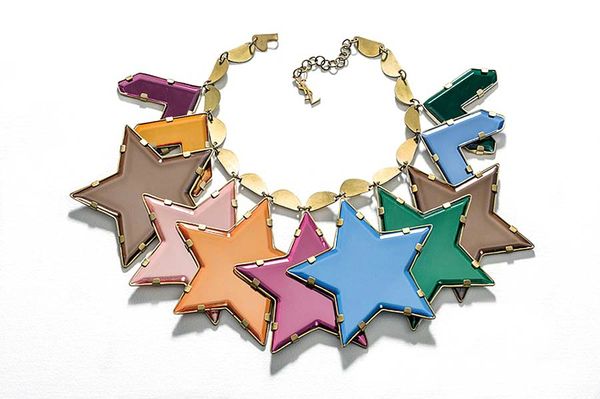 Gold-plated Miriam Haskell bib necklace made from glass beads and rhinestones. A similar necklace was featured in the March 1954 issue of Harper’s Bazaar, worn by the actress Maggie McNamara. © Pablo Esteva. 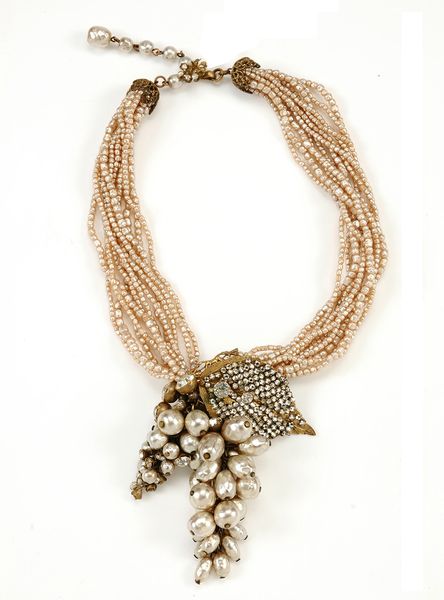 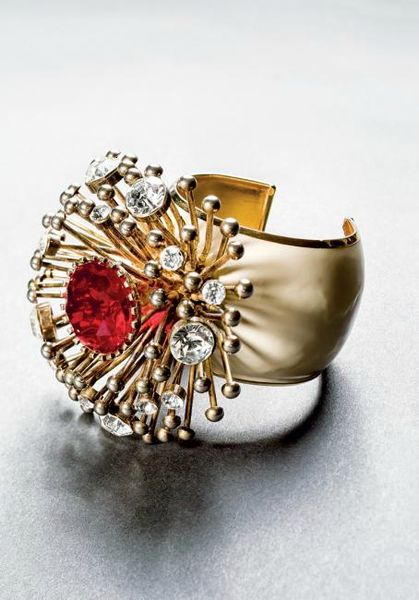 The Collection of Barbara Berger. Photo: Courtesy of Miriam Haskell The Collection of Barbara Berger.  Photo: Courtesy of Miriam Haskell

Commentaires sur "Fashion Jewelry, The Collection of Barbara Berger" at Museum of Arts and Design