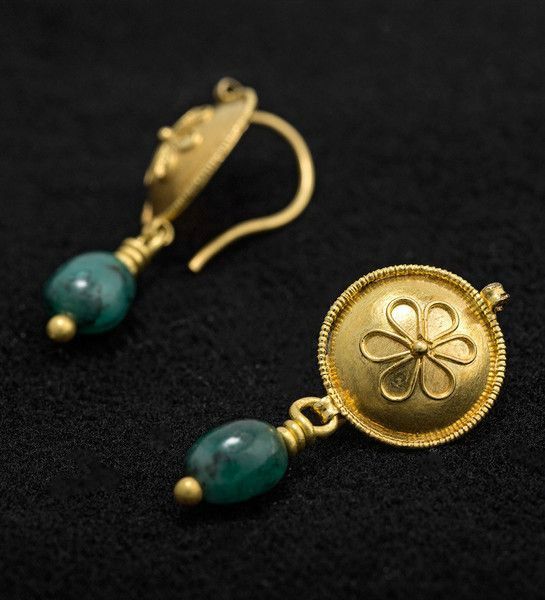 These delicate and wearable ear pendants consist of a gold shield disc that is centered with a rosette. The shield’s border is adorned with fine beaded wire. Below a gold wire pendant holds a green glass pearl. Both are intact and remain in an excellent state of preservation. Price CHF 3,800.00 The form of these rings is basically circular where a part is missing, as is in the crescent moon. The centre is adorned with a small sphere and two curled linings of delicate twisted wire. The border is embellished with a double rope form wire and with a separate beaded wire. A small ring and the twisted wire loop are soldered to the back. Both earrings are intact and in excellent state of preservation. Price CHF 1,500.00 These earrings have the form of a shield that is surrounded with beaded wire decoration. The stud in the center also consists of beaded wire and has a raised globule on top. The shields are hollow where the back side is soldered onto the front. Fine detail is the small hole in the back, to let the air escape during firing. The hoops are made from two gold wires that were twisted. The earrings are wearable and of very fine workmanship. Price CHF 1,900.00 This rectangular gold pendant at the rim has a ribbed ornamental rope encircling two thinner wire decorations. The plate has a central boss surrounded with beaded wire and four granules on each corner as well as one granule on front of the loop. The pendant is intact and in a very good state of preservation. Price on request. This fine and wearable finger ring in solid gold has a carefully carved nicolo intaglioshowing a female bust to her left. The ring is intact and remains in an excellent state of preservation. Price CHF 6,900.00 The spiral finger ring is made of gold foil over a silver core. On one side it shows the frontal part of a prancing horse and on the other end the tail of a dolphin. Both endings are executed in silver alloy.
The iconography connects the ring with the Hippocampus, a hybrid creature shared by Phoenician and Greek mythology. Poseidon is often depicted driving his sea-chariot drawn by hippocampi.
The ring is adorned with two garnet gemstones, cut cabochon, that are placed in filigree and granulation decorated settings. Price CHF 7,300.00

The ring is in an excellent state of preservation without any restoration. Some deposits from burial are remaining. The object is accompanied by a detailed archaeometric report supporting the authenticity. This rare two sided plague is decorated with motives in granulation technique that are inspired by Egyptian iconography. On one side is a winged scarab, while the reverse shows a wedjat, the Eye of Horus. The spacer bead is hollow cast but rather thick walled. The workmanship of the granulation is typical for the Phoenician jewellery work from this time period. Most likely the plague has been a centre piece of a double necklace, as can be seen by the four stringing holes. The spacer bead is in an excellent state of preservation without any restoration. The object is accompanied by a detailed archaeometric report supporting the authenticity. Price on request

Provenance: Private collection Switzerland. Previously collection Madame Guerlain, Paris.
Purchased by her husband on the Paris art market prior to 1980.