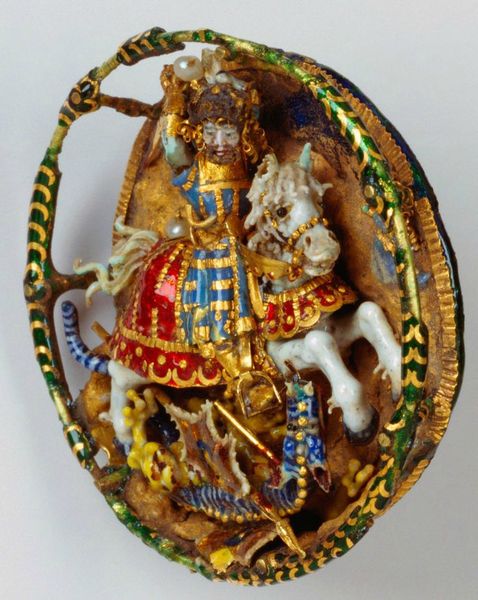 High-relief figure of St. George on horseback, facing right, slaying the dragon. He holds a sword with seed-pearl handle high over his head. 'Crimped' gold ribbons and crescents form a pattern on his opaque blue-grey armour and on the translucent red enamel of the horse's caparison. The dragon below is covered with opaque blue and white enamel and has yellow legs and claws. In the background to the left is a walled town in opaque white and blue. To the right is the Princess, kneeling in prayer and wearing an opaque grey dress. The scene is surrounded by a raised frame with scale-like ornament in black enamel and gold.

The reverse has arabesque-style ornament of 'crimped' gold ribbons inset with stylised gold rosettes on translucent green enamel. There are large areas of loss to the enamel on the surrounding frame; parts of the dragon have been restored with cold enamel.

This jewel has long been identified as belonging to a homogeneous group of small gold reliefs (émail en ronde bosse), distinguished by their style and enamelling technique. The workshop where the pieces were made can be dated c.1500-20 and several hypotheses exist regarding location, ranging from Spain and southern Germany to the Danube region. More recent and convincing are arguments ascribing the group to the Southern Netherlands in the wake of the great Burgundian tradition of enamelling.

The badge reveals an unusual iconography. St George is usually represented as a young beardless knight with helmet. Here he has a full beard and an abundance of richly curled hair. These features correspond almost exactly to those of Frederick Barbarossa (r.1152-90), as shown in the print on the title page of his biography written by Johannes Adelphus and published by Johannes Grunung in Strasburg in 1520. In this book, which was reprinted eight times between 1520 and 1629, Barbarossa is depicted as the epitome of the virtuous knightly warrior-emperor. The book appeared at a moment of Humanist interest in the glories of the Staufer emperors and encouraged by Maximilian I of Habsburg, Holy Roman Emperor (r.1493-1519), to enhance his own political status. After his marriage to Maria of Burgundy in 1477 Maximilian I became ruler of the Southern Netherlands. In the light of this sixteenth century revival, it may be that this representation of St George, with the features of the great emperor, was intentional. Moreover, Maximilian himself was referred to as der letzte Ritter (the last warrior) and was frequently commemorated 'in the guise of the gallant St George in armour'.

Maximilian died in 1519 and it is known that Charles V, his grandson and successor, was in Antwerp in 1520. It is just possible that this badge was executed on this occasion as a means of honouring the Habsburgs by alluding to the virtues of their Staufer predecessors and their imperial ideal.

The link with Maximilian is strengthened by a curious tradition attached to this jewel: it was known as the 'Holbein George' and was traditionally believed to have been worn by Henry VIII. There is no means of verifying the tradition that this was the 'riche brooch with ye image of sainet George' worn by Henry VIII which may have been presented to him by Maximilian. There is, however, no evidence that any of Henry VIII's jewellery has survived in the Royal Collection and the tradition may have become attached to the jewel while in private ownership.

Whilst it is not known when the badge entered the Royal Collection, it is exactly the type of jewel George IV acquired from Rundell, Bridge & Rundell the Royal goldsmiths from 1797 to 1840. It was probably the 'curious ancient enamelled Badge of the Garter, in glass case' listed in an inventory of jewels at Windsor Castle in 1830 and the 'ancient Badge Tudor' recorded there in 1837.

Text adapted from Ancient and Modern Gems and Jewels in the Collection of Her Majesty The Queen, London, 2008