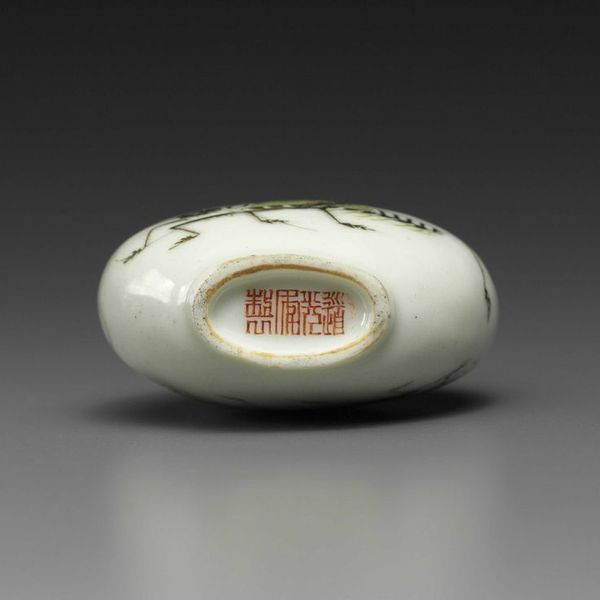 Notes: The katydid, either alone or with its cage, became a very popular subject on snuff bottles during the early 19th century. An emblem of courage, the katydid in Chinese is pronounced guoguo, which sounds the same as the word 'country'. The rebus is interpreted as jinzhong baoguo, meaning 'to be loyal to one's country'. Large quantities of imperially made bottles were presented to officials around the country as a sign of imperial recognition. Such a pun would have been a subtle and effective way of reminding officials of an essential feature of Confucian government. Another reason for the popularity of the katydid imagery is linked to the production of cricket and katydid cages and the popular pastime of katydid fights.

Snuff bottles with this theme can be found with a variety of design combinations. A Daoguang-marked bottle, painted with the katydid on the cage on one side, and a single katydid on the reverse, is illustrated by Moss, Graham, Tsang, in A Treasury of Chinese Snuff Bottles, The Mary and George Bloch Collection, Vol. 6, Part 3, Arts of the Fire, Hong Kong, 2008, pp. 690-1, no. 1318. The katydid theme can also be found on imperial glass bottles. See, for example, a Gueyue Xuan-marked example, published in Moss, Graham, Tsang, The Art of the Chinese Snuff Bottle, The J & J Collection, Vol. I, New York, 1993, no. 201.