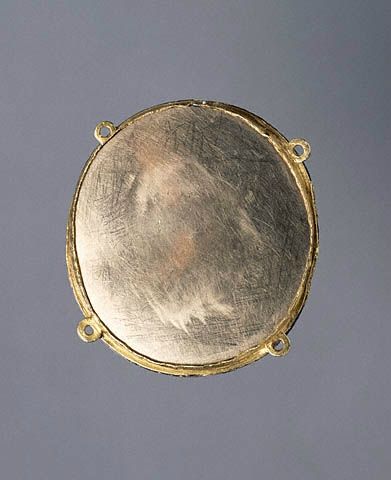 This type of jewel was worn as a dress accessory on the turned-back brim of a hat or cap, fastened by a pin or by stitches through metal loops attached to the back. The fashion for wearing hat badges remained in vogue from about the middle of the 1400s to the second half to the 1500s. This piece used a technique known ascommesso --referring to the process by which stones were "committed" or attached together like a jigsaw puzzle--that was often used to restore ancient gems.

The subject of this badge is the allegorical figure of Prudence, a popular subject during the Renaissance. With Justice, Fortitude, and Temperance, Prudence was one of the four Cardinal Virtues. Signifying wise conduct, she holds a mirror that she uses to see herself truthfully. The jewel was probably intended to be worn by a woman, possibly to invite Prudence's protection or to symbolize the virtues she personifies.