Covered punchbowl with platter, ca. 1745. Chinese for the Swedish market

Covered punchbowl with platter, ca. 1745. Chinese for the Swedish market 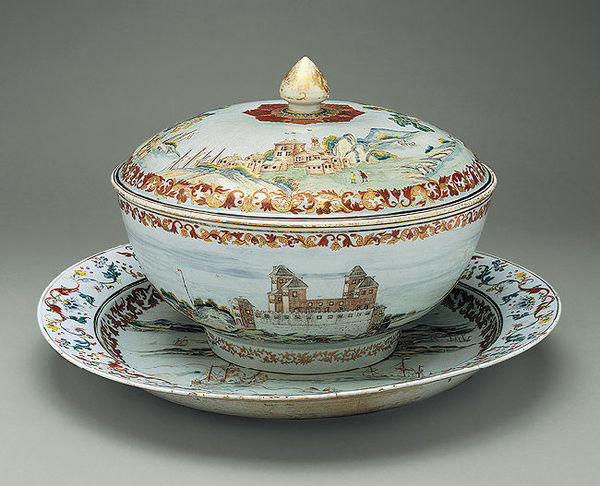 This monumental punchbowl, with its original cover and platter, must have been one of the most ambitious porcelains to grace an American colonial household. We can only speculate as to how the bowl, the decoration of which indicates that it was made for the Swedish market, found its way to a prominent Charleston family during the eighteenth century. It was listed among the effects of Mary Brandford Bull, upon her death in 1772, as "1 large China Bowl Dish & Cover." The Bulls, one of Charleston's wealthiest families, lived in the grand style. Through the four daughters, the bowl descended in the family and ended up in Philadelphia by 1790. The detailed painted scene on the platter is based on a 1691 engraving of the Swedish Château of Läckö, on Lake Vänern. Two other Swedish châteaus drawn from earlier print sources are represented on the bowl; the cover features two Swedish churches in a landscape with huntsmen, fishermen, and sailors.