The James A. Rose collection of netsuke and sagemono comes to auction at Bonhams New York

The James A. Rose collection of netsuke and sagemono comes to auction at Bonhams New York An ivory netsuke of a recumbent kirin by Okatomo, Kyoto, Edo period (late 18th-early 19th century). The mythical animal shown reclining, looking back over its right haunch with its mouth open in a snarl, its tail laying over its hips and its feet tucked in beneath its body forming a compact design, the details finely carved and stained dark, eyes inlaid in dark horn, signed in a rectangular reserve Okatomo, 1 7/8in (4.8cm) long. Est US$ 25,000 - 35,000. Photo: Courtesy of Bonhams.

NEW YORK — Bonhams is pleased to offer the James A Rose collection of Netsuke and Sagemono on September 17 at the Madison Avenue salesroom. As one of America's most dedicated and knowledgeable netsuke enthusiasts, James A Rose, MD (1931–2011) was a Member of the Board of Directors of the prominent International Netsuke Society and served for 23 years as the President of the Washington DC chapter. His esteemed collection, containing fine examples from a diversity of schools, will be offered in its entirety.

Rose was a graduate of Dartmouth College and Harvard Medical School. He went on to become a Commissioned Officer in the Public Health Service at the National Institutes of Health (NIH), were he was an acclaimed diagnostician and pioneering virologist. He was given his first netsuke – a Japanese sculptural toggle connecting a man's obi (sash) on his pocket-less kosode (robe) with his hanging sagemono (purse), first made popular in the 17th century - by his mother. As an outdoorsman with an endless curiosity for the natural world, Rose was initially attracted to netsukes in the form of animals, although he became increasingly enthralled with older pieces that strongly referenced Japanese culture and folklore.

The collection contains a plethora of notable highlights. The auction's top lot is an ivory netsuke of a recumbent Kirin by Okatomo, from Edo period Kyoto (est. $25,000-35,000), while Rose's interest in large and early Kyoto school ivories is exemplified by a tall ivory netsuke of a Chinese court noble from the Edo Period (est. $12,000-18,000). Standing over five inches tall, the youthful and elegant Chinese figure has an exotic and almost feminine quality. Many fine wooden netsukes are also included, such as a voluminous and beautifully proportioned Edo period standing horse – a character more commonly seen carved in ivory (est. $10,000-15,000). At nearly five inches, a large wood netsuke of a standing sumo wrestler is notable for both its height and its unusual subject matter (est. $12,000-18,000). Generally, sumos were depicted in action, and it is possible this netsuke is in fact a likeness of a particular wrestler. A wood netsuke of a standing horse. Edo period (18th century). Shown standing with its feet together and head lowered and looking back to the left, the long, flowing tail sweeping around the back and forming the himotoshi in a compact composition, 2 7/8in (7.3cm) high. Est US$ 10,000 - 15,000. Photo: Courtesy of Bonhams. 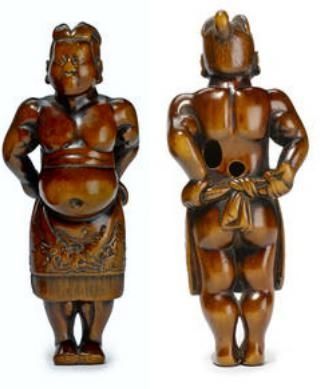 A large wood netsuke of a sumo wrestler, Edo period (late 18th century). The wrestler shown standing adjusting his kessho mawashiwith an expression of fierce determination as if he is about to step into the ring to face an opponent, his mawashi finely carved with crashing waves, 4 1/2in (11.4cm) high. Est US$ 12,000-18,000. Photo: Courtesy of Bonhams.

"Dr Rose is remembered as a generous expert who was always willing to share his wisdom and experience, especially with emerging collectors," said Jeff Olson, the Director of the Japanese Department at Bonhams New York. "We are very pleased to bring this distinguished collection to auction. It is without a doubt one of the finest private collections of netsuke I have handled during my career."

Bonhams will offer the James A Rose Collection of Netsuke and Sagemono on September 17 in New York. The auction will preview at Bonhams September 13-17.

A complete catalogue is available online at www.bonhams.com/auctions/21485

Commentaires sur The James A. Rose collection of netsuke and sagemono comes to auction at Bonhams New York