Two émail sur biscuit from the donation of the Grand Duke of Tuscany, Ferdinando I de 'Medici. China, Ming dynasty (1368 - 1644)

Two émail sur biscuit from the donation of the Grand Duke of Tuscany, Ferdinando I de 'Medici. China, Ming dynasty (1368 - 1644) Exquisite Chinese porcelain was already more than a hundred years before Augustus the Strong (1670 - 1733) come to Dresden. In 1590 the Grand Duke of Tuscany, Ferdinando I de 'Medici made (1549 to 1609), the Court of Dresden under Christian I of Saxony (1560-1591), a gift of fourteen Chinese porcelains, eight of which have up to now in the obtain Dresden porcelain collection.This includes the abnormal vessel in the form of small figure Guixing on a boat. In the Medici inventory of 1579 it is described as "Lucernina di porclana dorata et dipinta, de l'Indie" in the Dresden inventory of 1595 we find: ". Lucerna, or lamp on top of Porcellana verguldet Geziret with a standing figure" Surprisingly appears the bizarre display of the Chinese god of literature, Guixing. There is a Taoist deity in the Tang Dynasty (618 - 906) is said to have lived as a man and in the 14th Century learned divine worship. A form of representation shows the deity with ugly features and a bizarre kind of horns on his head. Often she stands with one foot on the head of a large carp, which symbolizes success in China in the official career. (From: Giambologna in Dresden, The Dresden gifts of the Medici in 2006, P. 103 - 108.) 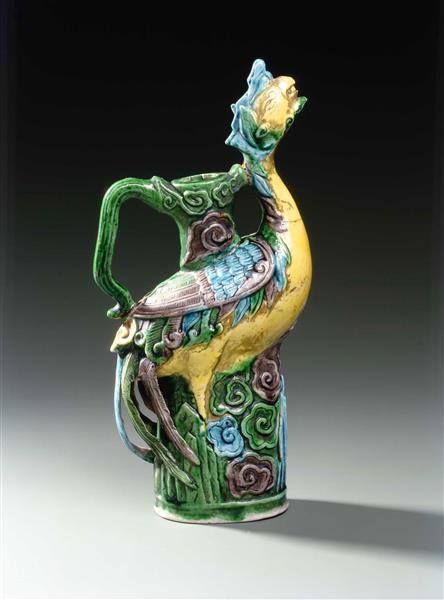