Coral works from the Green Vault

Coral works from the Green Vault 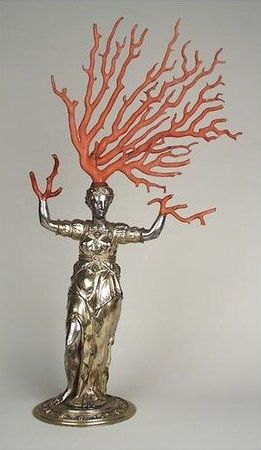 Already in treasury inventory of 1586/87 this work is listed as "1 Silver bilt breast of a virgin, with a large gewechß of coral Zincken ..." . Certainly the bizarre object was never meant for practical use, even if remove the upper body of the nymph in belt height and hollow lower part could in principle be used as a vessel. The statuette is rather to be regarded as an artistically and intellectually challenging goldsmiths plastic. It tells the written down by the ancient poet Ovid story of the nymph Daphne, who - in order to escape the approaches of the god Apollo - transformed into a laurel tree. To illustrate the miraculous metamorphosis of a coral tines whose shape corresponds to the branches of a tree is used. The man-made work of art that combines ideally with rare Naturalie. Like the goldsmiths brands reveal is a work Jamnitzer Abraham, son of the great Nuremberg goldsmith Wenzel Jamnitzer that was 1580 champion. He repeated in every detail with the Daphne a statuette that his father had created 1569-1576 and is now located in Ecouen the Musée National de la Renaissance. This was made possible with the help of molds, which were preserved in his father's workshop. 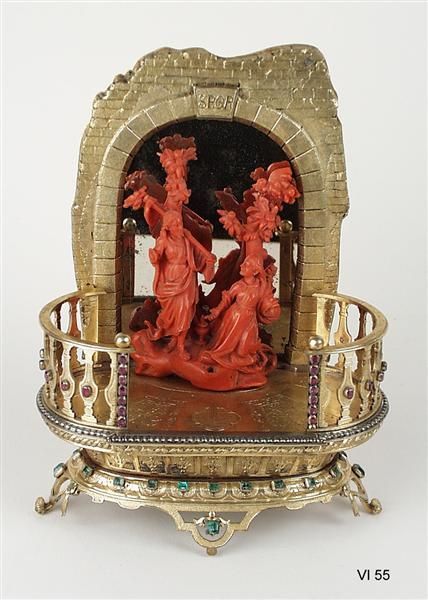 Works with religious themes play in the Dresden treasury quantitatively a minor role. The finest examples of the cabinet piece belongs to the "Noli Me Tangere", which was "delivered Hoff Joubelier thing Lingern" 1725-1733. It is devoted to an episode from the Gospel of John (20, 14-17): the risen Jesus appears to Mary Magdalene, who keeps him at first for a gardener until he reveals himself to her. His request not to touch him ("Noli Me Tangere") because he had not yet ascended to heaven, gave its name to the famous scene. The blood carved coral figural group was most probably built in the Sicilian town of Trapani, whose coral works were coveted in Europe. As an adequate framework of the precious preciousnesses is a stage-like architecture of gilded, decorated with precious stones silver. It is the Hofgoldarbeiter Georg Christoph Dinglingerhaus, the youngest brother, Johann Melchior attributed. The scene of extensive ruin arc takes on the grave vault cover, had disappeared from the Jesus, the mirror visually expands the space used there in depth. The highly stylized engravings on the bottom panel indicate discounts and a fountain and define the bounded laterally by a balustrade the scene as a garden. In the stage-like plant, the piece is related to the Italian cribs, the figures also show coral in silver settings. At the first establishment of the Green Vault treasure chamber museum commissioned as August the Strong in 1723 the jeweler Koehler with the sighting of the historical collection's holdings. A total of 155 pieces were restored, new gold plated or provided with a cold fresh paint. The grotesque shapes of the Amsterdam Nautilusgehäuses and about fifty years earlier created the Nuremberg goldsmith plastic inspired to Köhler, witty works to bring together both an imaginative splendor vessel. The Fußgruppe with the dragon, whose abdomen is a large coral tines and is mounted on an armored and masked bocksbeinigen creature, even in his time of origin wore a Nautilus. This is evident from the inventory of the art collection of 1640, which lists as "the one piece uf snails Berlnmutter silver gantz vergüldeten drachenn, because the schwantze a beautiful gewachssener CorallenZincke uf which does the same rest, [...] on top of it a Silver vergüld a weibswild [sic]. " With the design of clips to Köhler relating directly to the grotesque, which coat the surface of the Nautilusgehäuses in black and bas-relief engraving as a fine web. The bizarre vessel shows as an example not only creativity and artistic sensibility of the court jeweler, but also the influence of historically grown treasure art collection to the so-called Augustan Baroque. From the arms of Korallenzinkens small branches protrude from gold enamel, which transform the highly branched marine plant for deciduous tree. On the branches of a walnut-knabberndes squirrel and a bird settled. Other animals inhabit the rectangular base plate Jaspisachat whose lively, fibrous structure reminiscent of a mossy, forest floor covered with needles. The geschmelzte green parrot who wears a large diamond at stomach has occupied its wings spread wide with rubies. It stands on a small grassy hill from a baroque pearl and green gold enamel, from the hervorkriecht a snake. These approaches a stork brought his right leg in a defensive gesture against the reptile. A frog in a pearl whose body was used originally, completes the scene. The juxtaposition of Stork and snake is unlikely to be of any nature - was but the fight between the two animals as a symbol of the defense of the wise Christians, embodied by the stork, against the temptations of the devil in the shape of the snake. The frog, who, like the snake and the toad to the unclean animals used in Christian iconography as a symbol of the devil and is luxuria (unchastity) and avaritia (H) associated with the attributive vices. The decoration of the pedestal with fruit and flower bunches of stones and enamel hanging on thick, blue garland is directly comparable to the Hellebardiers with Tiger Dog (VI 112). The horned masks with sparkling diamond eyes on the edges of the pedestal also connect the piece with the Galanteriewarenhändler (VI, 89). The origin of this came relatively late in the Dresden collection of art from the same workshop is therefore very likely. 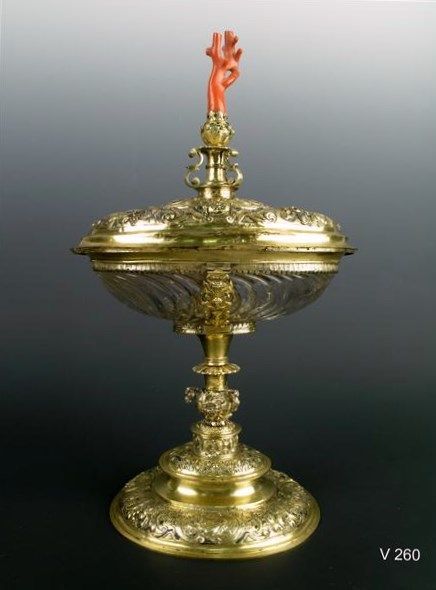 The ornamental pot with coral comes from the possession of the Erdmuthe of Stettin-Pomerania (1561-1623). Below the bottom of the crystal bowl is on the medallion in glass painting their name and only barely legible date 1583, which allows the dating of the text, the most likely comes from Szczecin court goldsmith Egidius bare. The rock crystal bowl is decorated with swirls cuts.French inventories refer to this in the 14th Century novel type of cut as "ondoyé s manière de soleil". Probably in Paris this especially for decorative rock crystal vessels cut was invented and then taken over by Venetian stone cutters. Only about 15 executed in this technique shells are known so far. Those in the Green Vault is one of the best quality. How they came to Dresden, is unknown. Maybe it was a gift from Erdmuthe to her sister Sophia of Brandenburg, who was married since 1582 to Christian I of Saxony (reigned 1586-1591). In a niche-like architecture, crowned by three vases with jeweled, enameled flowers, presents itself under a halo with the image of Our Lady of St. Joseph of Nazareth. He is represented in ancient costume and holding in his left arm the Christ child. The back of the small house altar decorated with an engraved illustration of John of Nepomuk (1345-1393), which is shown as a martyr with palm branch and crucifix. Due to his canonization took place in 1729 he enjoyed great popularity at that time. In any case, as both John and Joseph to Maria Josepha, the pious daughter of Augustus the Strong, particularly revered saints included. The figure of St. Joseph, the relief of the Madonna, the small busts and other decorative elements are carved from coral and probably come from Italy, where the artistic processing of this fascinating natural material had reached its greatest importance. A center was located in the Sicilian town of Trapani, their products can be found today in many European collections. The restrained decorated with gold, enamel and precious stones in silver version is of the late style of Johann Heinrich Köhler. The jeweler sold the small altar for the considerable sum of 1,000 thalers to Augustus the Strong, who him on 11 February 1732 handed over to the Green Vault.