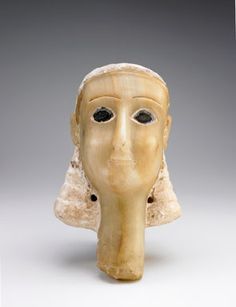 Head of a woman (known as Miriam), Mid-1st century, Yemen. Alabaster, stucco and lapis lazuli. Gift of The American Foundation for the Study of Man (Wendell and Merilyn Phillips Collection) S2013.2.44

WASHINGTON, DC.- The Arthur M. Sackler Gallery today announced a gift of 374 ancient Arabian artifacts from the American Foundation for the Study of Man. Dating from the eighth century B.C. to the second century A.D., the objects were unearthed at the ancient city of Tamna in Yemen and provide invaluable insight into the little-known history of the southern Arabian Peninsula. The collection was assembled by American archaeology pioneer Wendell Phillips in the early 1950s. Together with a team of renowned archaeologists, Phillips compiled thorough excavation records, creating one of the few fully documented collections of Qataban artifacts available to researchers that are invaluable to future study of the region.

The donation of the complete Qataban collection to the Sackler is made possible by Merilyn Phillips Hodgson, president of the AFSM and sister of the late Wendell Phillips.

"This collection provides the Sackler with a tremendous opportunity to shed light on the rich history and culture of ancient Arabia, and to do so through the discoveries of one of the most remarkable early archeologists, Wendell Phillips," said Julian Raby, The Dame Jillian Sackler Director of the Arthur M. Sackler Gallery and the Freer Gallery of Art.

Once admired for its fragrant and abundant foliage and lush pastures, the Qataban empire of the late first millennium B.C. was a hub of cultural exchange, central to the ancient trade routes that extended from the Mediterranean Sea to the Indian Ocean. Tamna was its bustling capital city and reached its peak between the fifth century B.C. and first century A.D., when a mysterious catastrophic fire destroyed the city, leaving it buried under layers of ash and sand for almost two millennia.

Tamna remained largely undiscovered until the 1950s, when Phillips, a paleontologist, geologist and a self-taught archaeologist, gathered a team and began systematic excavations to unearth and record artifacts using methods that are standard archaeological practices today. His technical methods in excavation and detailed field notes have been critical to the study of ancient Arabia and have laid the groundwork for more recent explorations.

Highlights among Phillips' discoveries are a pair of striking bronze lions with the figure of Eros, the Greek god of love, on their backs. Known as the "Lions of Tamna," the skillfully cast sculptural forms exemplify the vibrant cultural exchange between the Qataban and Greek empires. Another collection highlight is a translucent alabaster head of a young woman, with lapis lazuli eyebrows and an Egyptian-style hairstyle. Unearthed in the cemetery of Tamna, the head was named "Miriam" after the daughter of a member of the expedition.

In 1949, Phillips founded the American Foundation for the Study of Man with the mission to “conduct scientific research, study and investigate man and his habitats with emphasis on archaeological investigation, excavation, preservation, analysis and dissemination of scientific results.” The collection is part of the AFSM, originally founded in Washington, D.C., and currently based in Falls Church, Va.

Selections from the collection were on view in the Sackler’s 2005 exhibition “Caravan Kingdoms: Yemen and the Ancient Incense Trade.” The Qataban empire is one of the least known of the ancient South Arabian empires. This collection holds potential for new research and discovery and is a window into an almost forgotten ancient civilization. In celebration of the AFSM’s gift, the Sackler will mount an exhibition of collection highlights in 2014, while planning further touring exhibitions and conferences, workshops and public programs to encourage the study and research of this remarkable group of works. One of a pair of large bronze high reliefs each in the form of a striding lioness surmounted by a figure of Eros, 1st century B.C.E.-mid-1st century C.E., Yemen. Bronze. Gift of The American Foundation for the Study of Man (Wendell and Merilyn Phillips Collection) S2013.202