LONDON - Eskenazi Ltd will present an exhibition of sixteen pieces of Jun ware at 10 Clifford Street, London, from 31 October to 22 November 2013. The exhibition will be a major contribution to the 16th Asian Art in London (31 October to 9 November), the annual event that unites London’s Asian art dealers, major auction houses and societies in a series of selling exhibitions, auctions, receptions, lectures and seminars, attracting collectors from around the globe.

Jun ware is often described as one of the ‘Five Classic Wares’ (wu da yao) of the Song dynasty (960-1279). The name ‘Jun’ is derived from the kiln near Juntai terrace within the north gate of what was the Yuzhou prefecture in Henan province where the ceramics were produced from the end of the Northern Song period (960-1127) to the Ming dynasty (1368-1644). Jun ware has been much admired over the centuries by both Chinese and Western connoisseurs for the beauty of its glaze that ranges from a classic thick opalescent sky blue to various mottled and streaked effects in tones of mauve, lavender and plum and also green. Understanding how the glaze was created proved elusive until the late 1970s when it was discovered that the blue tone is not created by pigments at all but is actually an optical effect. During firing the Jun glaze separates into light-scattering droplets of glass and when light passes through this ‘glass emulsion’, the blue spectrum of light is reflected, giving the ware its bluish hue.

The sixteen pieces illustrate the range of shapes and glazes produced from the 11th to the 15th centuries and, whilst the earlier works may have been used by the aristocracy and the wealthy, the larger 15th century display wares were specifically made for imperial use. The popularity of Jun-glazed jardinières in various shapes at the Qing court, three hundred years after they were made, may be gleaned from their depiction in a number of paintings of the period. These wares were displayed in buildings within the Forbidden City and the Eskenazi exhibition includes a group of four glazed stoneware flowerpots, or jardinières, and one glazed rectangular stoneware stand, all dating from the Ming dynasty. One of these – a blue-glazed flowerpot of compressed baluster form (zhadou) – is later incised with characters indicating its place of use in the 18th century: ‘the Palace of Established Happiness; for use in the Hall of Concentrated Radiance’. This palace complex was commissioned by the Qianlong emperor in the early 1740s as a new set of living quarters for himself near the north-west corner of the Forbidden City as a personal retreat, away from the ardours and duties of his role as emperor. The original buildings were destroyed in a disastrous fire in June 1923, but the palace was reconstructed in 2005 by the China Heritage Fund. (figs. above & below) 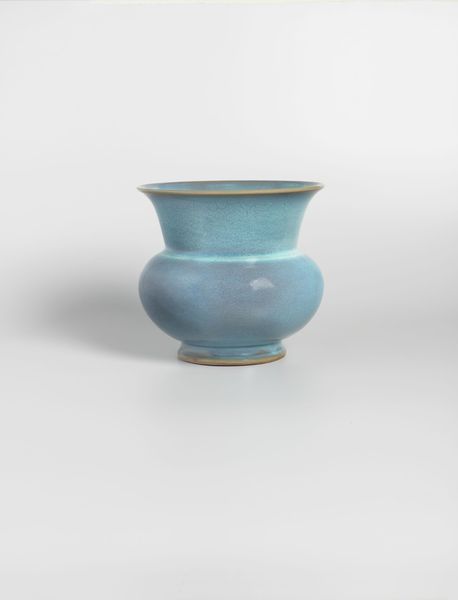 The high regard for Jun numbered wares at court during the Qing dynasty was not only due to the appreciation of the glazes but also because of a resurgence of interest in the art ofpenjing, creating miniature landscapes in a planter. While the art of potting miniature trees and landscapes may have had its origins in earlier periods, the practice became widespread during the Song and Ming periods. The miniature trees were treasured like antiques and paintings and their cultivation became an art form in itself. This was transmitted to Japan as bonsai.

One of the earliest pieces in the exhibition is a small, finely potted grey stoneware dish with bracketed hexafoil rim from the Northern Song period, 11th-12th century. A soft greenish-blue glaze covers the dish, thinning to an olive tone on the rim and vertical ribs. The subtle glaze may point to the influence of the imperial Ru kilns on the Jun potters while the distinctive bracket-form rim clearly has taken inspiration from contemporary lacquer and silver wares. (fig. below) A blue-glazed, purple-splashed grey stoneware dish from the Jin period, 12th-13th century, is covered with a sky-blue glaze thinning to an olive colour at the rim and suffused on the interior with a rich mauve splash incorporating plum and greenish tones. The striking use of purple copper oxide ‘splashes’ against the characteristic blue ground is seen primarily on Jun wares of the Jin period (1115-1234). Also from the Jin period, 13th century, is a large blue-glazed grey stoneware bowl with deep sides rising to a foliate rim. Very few examples of such large ribbed bowls are to be found, even in museum collections. (figs. below) This is the first exhibition at Eskenazi to focus on a single ware and the range of shapes and beauty of the glaze will enable visitors to appreciate why these pieces have always been so prized.