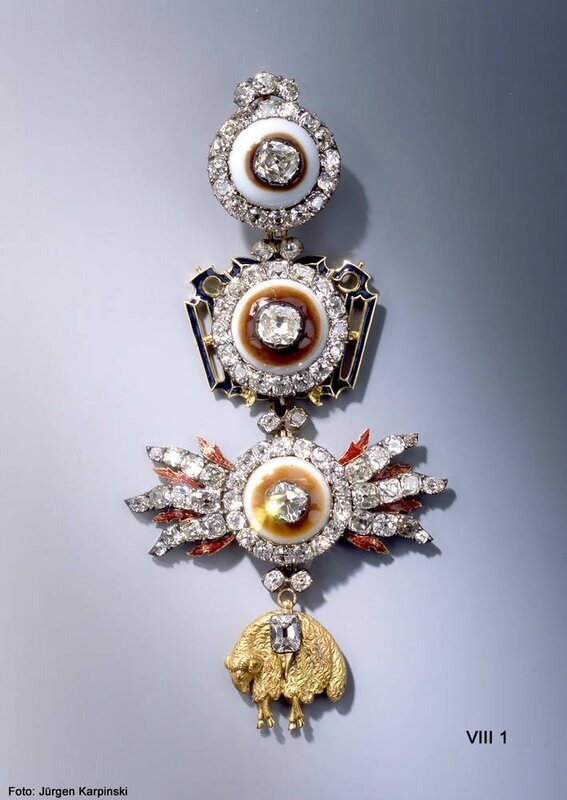 The cool Noblesse radiating jewel with three Onyxes was passed in July 1725 a jeweler Johann Heinrich Köhler. Koehler had created already in 1722 the "big" diamond fleece Order as important religious representation of Augustus the Strong. This order is the growing favor of the king against the Dresden goldsmith in 1701 raised to the Master. The material for the fabric decorations, including diamonds and also the onyx, Koehler received from the royal treasury. The diamonds used were obtained from the other pieces of jewelry jewel sets that have been broken for that purpose, or from the personal stock of the king. Therefore, the expenses of the king were quite limited. The latter largely followed in its shape the design of the jewel for the Diamond Rose set (VIII 18) of Dinglingerhaus, considered in the research as a model for the type of Augustus the Strong ordered Fleece Order. By Kohler himself no pictures of jewelry designs have survived. Erna of Watzdorf noted, however, that three of his designs for fabric orders with "oriental" topaz and cat's eyes in the archives of the Green Vault were available until its destruction in 1945. The pleasing appearance of the Order of the graceful mount contributes by onyx diamond rings. Hide the diamonds on the top button of the eye where the gem was attached to the belt. The middle button, the fire iron, emphasizes an ornament-like framing with black enamel.The seated in the fire iron onyx at the center of a medium sized diamond sits, is particularly beautiful color. From the diamond ring including the following batch spouted flames on each side shows three bright main flame front, accompanied by small, red enamel side flames. The order was granted by Kohler deliberate elongation, which underscores its well-balanced grace.