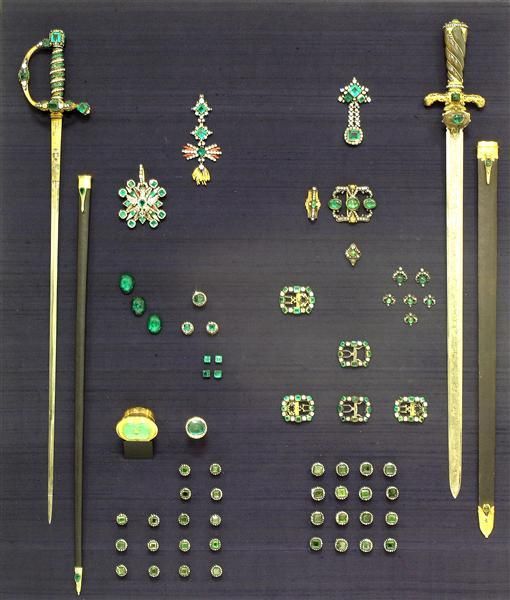 Like all gem sets of August the Strong (see, among others, the texts set for sapphire) presented the emerald set in 1719 a self-contained ensemble dar. Its value was estimated at 98,000 dollars. Further additions followed, for example in 1731 with the jewelry execution of the Order of the Golden Fleece or 1737 with the production of a new sword. The emerald suite was the king at the kurprinzlichen wedding on a white velvet gown at the 16th September 1719 during a performance of "comedy france". Of the original eleven-part "Couteau de Chasse Gehenck" the emerald set, nine pieces have survived to this day. In addition to the buckle body belt (VIII 133a), these are the their associated slide (VIII, 133 b), see in the picture next to the hanger, and the left of the buckle, and belonging to the slider larger tip (VIII, 133 c), as trimming piece end of the belt served. Preserves also have six ornamental pieces (VIII 133 s) that have been placed on the case of the suspension. Were lost, a small pocket trim and double the castle of the belt. The functional relationship between the conditional and the sword belt is worn cutlass (VIII 144) found their counterpart in the figural jewelry and precious stones of the hanger parts.As a master of Hirschfängergehänges was Erna of Watzdorf (1962) Georg Christoph Dinglingerhaus, the brother Johann Melchior called. He worked for the court in Dresden since 1704 and has worked in close division of labor with his brother Johann Melchior Dinglinger. 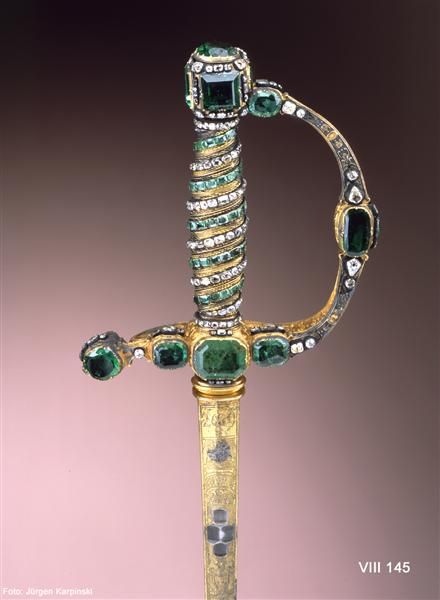 The production of an elegant emerald set for Hofdegens is a clear indication of an incipient change in taste and the different use of the jewel sets. The old sword was a distinctly original, embossed creation of figurative elements Johann Melchior Dinglinger. Agate through the handle in the form of a tiger head, he gave the entire set a clear relationship to the hunt. The new smallsword was one of the first changes that Augustus III. could make to his father's jewelry ensemble. In January 1737, Johann Friedrich Dinglingerhaus created by his father broke the sword and also the stylistically related hunting whip to make the material from the new representation weapon. The jeweler drew on more gems of the royal inventories. In November of the same year Dinglingerhaus his client could pass the new sword. This followed the pattern in his almost thirty years earlier developed by Johann Melchior Dinglingerhaus for the set brillant sword type. Like the sword of the tortoiseshell kit he has an additional front strap that goes into the hand strap in elegant swing. The handle is narrower than previously usual. The typical spiral band from Dresden smallsword twice five turns more prominent.These are made of two bands, one consisting of small emeralds and the second from diamonds, which are separated by twisted gold threads. The large emeralds already adorned the sword predecessors, focus, also following the Dresden tradition, the knob, the guard and the two brackets. There are table stones of different size and different edge, where the jeweler knew how to give a uniform effect by clever version. His masterful Ziselierkunst then could put on the headband and the guard proof of the goldsmith. Belonging to the emerald set cutlass, despite its magnificent features the functional requirements of a hunting weapon more appropriate than that of the Karneolgarnitur (VIII, 240). Johann Melchior Dinglingerhaus created with this cutlass a jewel artwork of exceptional rank, whose meticulous details are among the most beautiful elements of the jewel treasury of Augustus the Strong. The compact handle of deer catcher consists of a light brown agate, were cut into the spiral grooves. In the typical ceremonial weapons Dinglinger shape machined gold cords are inserted into these grooves. Multiple varying the artist the subject of hunting. One discovers in gold molded heads of exotic lions and carefully designed game of indigenous forests. The decoration of the steel blade engraved with hunting scenes on both sides - is hunted mainly deer, but also bear, wild boar, fox and hare - created, as in the cutlass of Karneolgarnitur, the Dresden court engraver Moritz Bodenehr. He signed and dated the blades back "1717. Bodenehr fecit ". Originally formed the virtuoso crafted hunting knife with the broken 1737 smallsword and hunting whip up a design unit, which joined the jewelery set with the Collection of Arms and at the same time with the treasure close inspection focused on art. The cutlass set of emerald is not only a magnificent, but also materially valuable work of art. He is busy with 9 large emeralds and 78 small diamonds, put the thought out accents. First was on the agate shell of protection a large diamond on a red foil. In 1722 he was replaced by one of Augustus the Strong acquired in Warsaw, especially beautiful Smaragdcabochon. 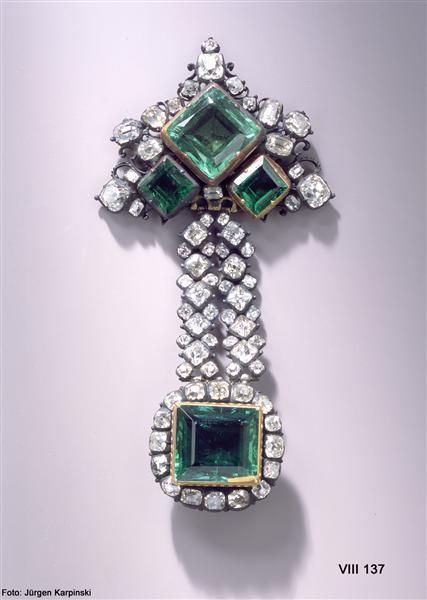 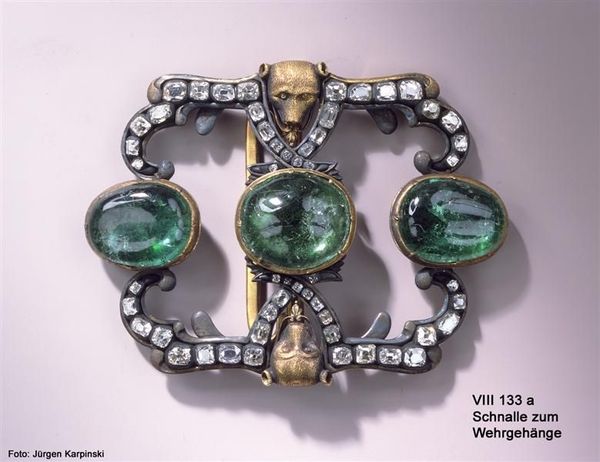