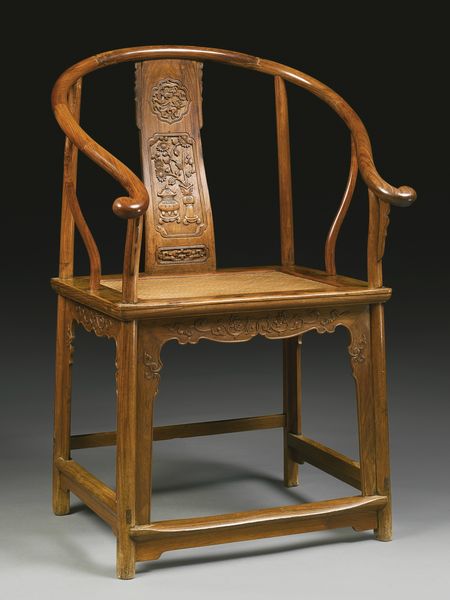 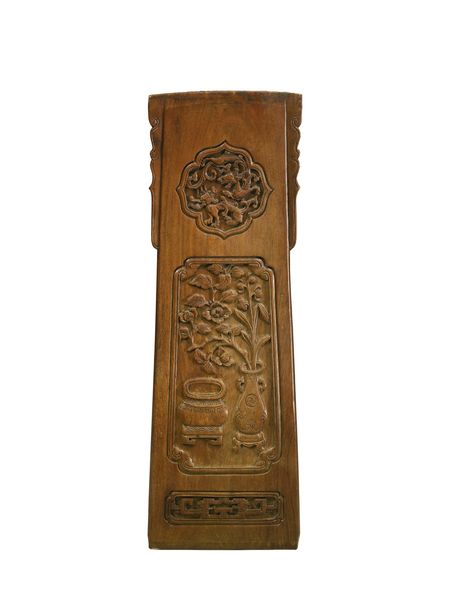 with a slender, extravagantly arched crestrail of five sections joined by pressure pegged scarf joins and a wide bowed rectangular splat flanked by shaped integral beaded flanges carved with an ogival medallion of a pair of chilong above a beaded and shaped rectangular panel of an archaistic gu containing an abundance of flowers and a bombé form censer and cover and a pair stylized confronting dragons below, the soft matted seat within a molded frame above elaborately arched and cusped beaded front and side aprons carved with scrolling and entwined foliage joined to long beaded flange brackets, the legs of circular section joined by four typically ascending stretchers; together with a matching back splat similarly carved but with a pear-shaped vase containing flowers and a bombé censer (2). Height 39 3/4  in., 101 cm; Width 27 in., 68.6 cm; Depth 22 in., 56 cm. Estimate 80,000 — 120,000 USD

Note: This armchair with its elaborate and distinctive carving appears to be one of a larger set.  The additional backsplat with this lot makes two. Another currently in the Minneapolis Institute of Arts is illustrated in Robert D. Jacobsen and Nicholas Grindley, Classical Chinese Furniture in the Minneapolis Institute of Arts, Minneapolis, 1999, p. 64, no. 14, and a pair, formerly from the Collection of William Haynsworth, sold in these rooms 10th October 1987, lot 497.

Other examples of horseshoeback armchairs with comprehensively carved backsplats containing antiquities and flowers may be seen in Michel Beurdeley,Chinese Furniture, Tokyo, 1979, p. 78, no. 99. A slightly more ornate example in the Palace Museum is illustrated in Hu Desheng, A Treasury of Ming and Qing Dynasty Palace Furniture, Vol. 1, Beijing, 2007, p.95, no. 70. Finally, a related pair from the Sackler Collection was sold in these rooms 16th September 2009, lot 15.