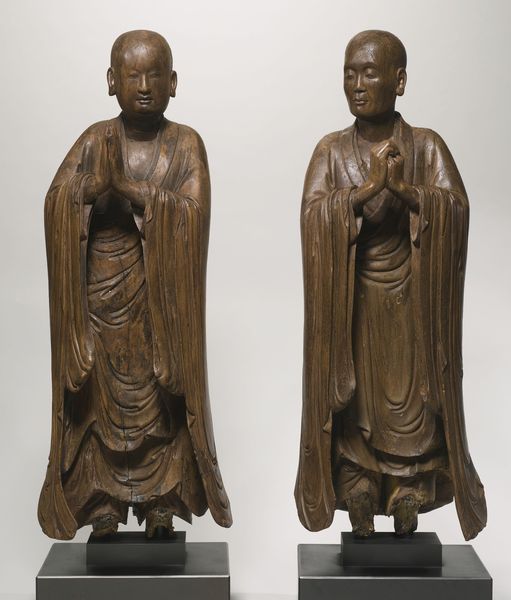 NOTE: Kasyapa was one of the principal disciples of Sakyamuni Buddha and convened and directed the First Buddhist Council after Buddha’s death and parinirvana.  He came from the kingdom of Magadha and by the time he met Buddha, was already well into his eighties.  He was a renowned ascetic and had a large following of his own. After an encounter with Buddha, Kasyapa and all of his disciples were converted.

Ananda was one of Buddha’s first cousins, and of all the disciples, had the most retentive memory.  Most of the sutras in the first part of the Pali Canon are attributed to his recollection of Buddha's teachings during the First Buddhist Council.

Kasyapa and Ananda were two of Buddha’s ten principal disciples. In the Chan Buddhist tradition, Kasyapa is considered the first Indian patriarch, and Ananda the second. They are often portrayed together on either side of the Buddha. This arrangement is commonly found in caves in China dating from the Northern Wei dynasty (386-535), with Ananda standing to Buddha’s right and Kasyapa to the left, as seen in the Central Binyang Cave at Longmen, illustrated in A. Falco Howard, Li Song, Wu Hung and Yang Hong, Chinese Sculpture, New Haven, 2006, p. 238, fig. 3.39. This standard iconographic arrangement continued through the Sui, Tang, Liao and Song dynasties, all the way to the Ming dynasty, as can been seen in this present pair.

This pair is unusual for the realistic manner in which the disciples are portrayed.  Each carved from a single piece of wood, wearing Chinese monks’ robes, with long flowing sleeves and kasaya drapped over their left shoulders.  Kasyapa’s hands are clasped in the traditional Chinese gesture of greeting, while Ananda holds his hands inanjalimudra, a traditional Indian greeting gesture. There are traces of gesso in the crevices of the figures indicating that they were once painted, a common practice as, seen in Song dynasty examples from the Guqinglian Temple in Shanxi, illustrated in Z. Chai and Y. Chai, Ancient Painted Statues in Shanxi Province, Beijing, 2008,  pp. 200, where the figures of Ananda and Kasyapa have identical poses to the present pair.

Early depictions of Kasyapa often portrayed him with foreign features, a reference to his Indian origins, as seen in a northern Wei dynasty image from Maijishan illustrated in A. L. Juliano and J. A. Lerner, Monks and Merchants: Silk Road Treasures from Northwest China, New York, 2001, p. 180, where Kasyapa has a prominent chin and large hooked nose. By the Ming dynasty, Kasyapa was still depicted as an old man, but his features had become more sinicized, as in the present pair.  Ananda, being related to Buddha and coming from the Himalayan foothills, was always portrayed as a young man with East Asian features.

Sotheby's. Footsteps of the Buddha: Masterworks from Across the Buddhist World. New York | 03 sept. 2013 - http://www.sothebys.com