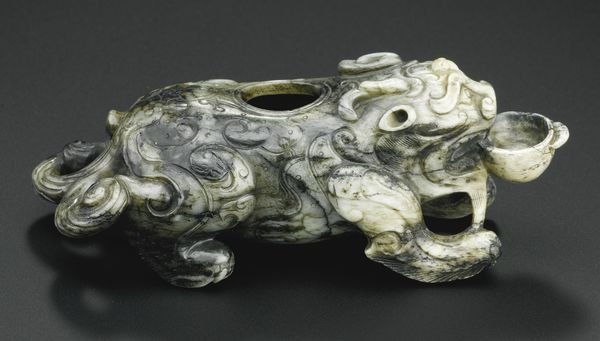 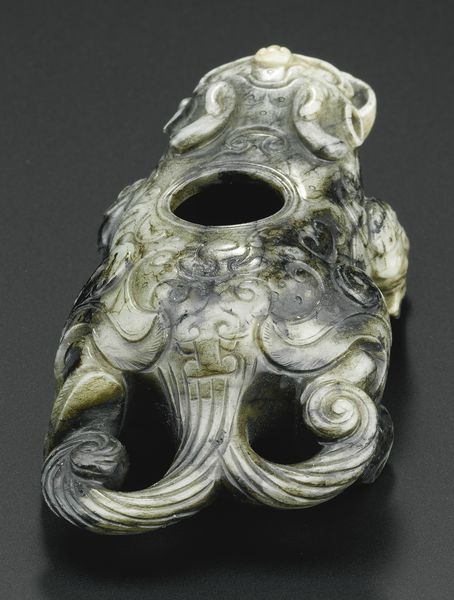 A gray jade  bixie-form water dropper, Ming dynasty or earlier. portrayed in a crouching position, the beast's large head crowned with two horns above heavy eyebrows, grasping a winged bowl in its mouth, drilled with a hole leading into the hollowed body, its back with a circular aperture, surrounded by archaistic motifs covering the body and terminating at the bifurcated tail, the gray stone suffused with inky black inclusions. Length 5 3/4  in., 14.6 cm. Estimation 80,000 — 120,000 USD

Exposition: Chinese Jade Throughout the Ages: An Exhibition Organised by the Arts Council of Great Britain and The Oriental Ceramic Society, 1st May - 22nd June 1975.

Litterature: Jessica Rawson and John Ayers, Chinese Jade Throughout the Ages: An Exhibition Organised by the Arts Council of Great Britain and The Oriental Ceramic Society, Issue 16, London, 1975, cat. no. 338.

Notes: This animated mythical creature has been skillfully carved in the round to capture both the robustness of its archaic roots and the playfulness characteristic of Ming jade animal carvings. Its stout body, decorated with archaistic scrolls, is finely formed and detailed and crouched on all fours as though ready to pounce, while the large facial features imply a certain mischievousness.  A jade water dropper of this form, in the Qing Court collection and still in Beijing, is illustrated in The Complete Collection of Treasures of the Palace Museum. Jadeware (II), Hong Kong, 1995, pl. 160; and another was sold at Christie’s New York, 21st March 2013, lot 1199.

The form of this vessel is inspired by archaic bronze vessels of the Six Dynasties period, a tumultuous yet artistically creative time in China’s history that succeeded the Han dynasty (206BC-220AD). For example, see a bronze water dropper similarly cast in the form of a mythical creature holding a bowl from its mouth, published in The Complete Collection of Treasures of the Palace Museum. Bronze Articles from Daily Use, Hong Kong, 2007, pl. 137; and another illustrated in Rene-Yvon Lefebre d’Argence, Ancient Chinese Bronzes in the Avery Brundage Collection, San Francisco, 1966, pl. XLVII, fig. B, together with a tapir-form vessel, fig. A.