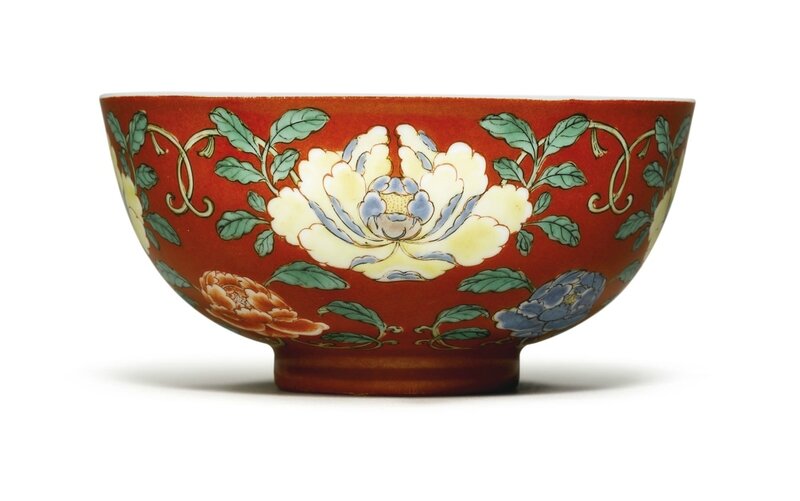 LONDON.- Continuing its tradition of bringing to market rare and extraordinary property, Sotheby’s announced the sale of Fine Chinese Ceramics from The Alfred Beit Foundation. The group of 20 ceramics was assembled by Sir Alfred Beit (1903-1994), renowned art collector and philanthropist, and purchased through Chinese art dealer John Sparks in the 1950s. The 14 lots will be offered in Sotheby’s auction of Fine Chinese Ceramics & Works of Art in London on 6th November 2013 and are expected to realise a combined total in the region of £300,000 / €350,000.

Robert Bradlow, Director, Head of Sotheby’s London Fine Chinese Ceramics and Works of Art Department, said: “Sir Alfred Beit was a discerning collector with a marvellous eye for exquisite pieces of Chinese porcelain. It is a privilege for Sotheby’s to offer this group of ceramics which come to auction with exceptional provenance. With a particular penchant for examples of ‘famille-rose’ and ‘famille-verte’ porcelain, Sir Alfred made considered choices when selecting objects for his collection, with the emphasis on quality and design.”

Commenting on the sale, a representative of the Alfred Beit Foundation, said: “The group of ceramics is surplus to the main collection, has been held in storage for many years and was rarely on public view. Its sale will help secure the long term future of Russborough, its demesne and its diverse collections so that the visiting public from both Ireland and abroad may appreciate and enjoy it for many decades to come.”

HIGHLIGHTS FROM THE COLLECTION finely potted with deep rounded sides resting on a straight foot, the exterior intricately painted with two registers of flowering peony blooms borne on foliate scrolls, the upper blossoms enamelled with yellow and blue petals surrounding a stippled yellow centre, the lower register of smaller peony blooms variously painted in blue, iron-red and aubergine enamels, the leaves in two tones of clear green enamel outlined in grisaille, all reserved on a rich coral-red ground, the interior and base glazed in white, inscribed to the base with a four-character reign mark within a double-square.

The colours employed on this bowl are typical of the porcelain produced in the early Yongzheng period at the Imperial Workshops in Jingdezhen and continue in the style pioneered by craftsmen of the Kangxi period. Dark-coloured grounds were favoured for floral bowls of this type for their ability to dramatically display the vibrant famille-verte palette. Hugh Moss suggests in By Imperial Command. An Introduction to Ch’ing Imperial Painted Enamels, Hong Kong, 1976, p. 82, that such bowls that relied heavily on the traditional famille-verte palette were probably produced in Jingdezhen following porcelains painted in the Palace Workshops in Beijing. Until the craftsmen in Jingdezhen became acquainted with the developments in famille-rose of the Beijing ateliers they continued to work in the dominant style of the Kangxi period. Moss suggests that Yongzheng yuzhi marked famille-verte coral-ground bowls of this pattern were produced in Jingdezhen between 1722 and circa 1725 and between 1722 and 1728 with additional touches of famille-roseenamels.

This bowl is notable for both the unusual composition and colouring of the two bands of peony blossoms. A bowl of this type but with a ruby ground, was sold in our Hong Kong rooms, 9th November 1982, lot 293, and again in our New York rooms, 11th/12thSeptember 2012, lot 11, from the collection of William and Jennifer Shaw. Compare also a similar coral-ground bowl, but the floral blooms coloured in famille-roseenamels, illustrated ibid., pl. 82, and sold in our New York rooms together with its companion piece, 29th November 1978, lots 373 and 374 respectively.

The colour scheme of this piece is related to smaller bowls of shallower form and lipped rim, similarly painted with three large peony blossoms in yellow and red against a rich coral ground and inscribed with four-character Yongzheng yuzhi marks; see one in the National Palace Museum, Taipei, included in the Museum’s exhibition Painted Enamel of the Ch’ing Dynasty, Taipei, 1979, cat. no. 35; and two in the Chang Foundation, published in Selected Chinese Ceramics from Han to Qing Dynasties, Taipei, 1990, pl. 142. A bowl of this shallow type painted with related blue and white blossoms, in the Shanghai Museum, is included in Chugoku toji zenshu, vol. 21, Kyoto, 1981, pl. 105.

Famille rose, noire and verte are the commonly used French terms for 'families', or palettes of enamel colours, used to classify Chinese porcelain. The colours employed on this bowl are typical of the porcelain produced in the early Yongzheng period at the Imperial Workshops in Jingdezhen and continue in the style pioneered by craftsmen of the Kangxi period. Dark-coloured grounds were favoured for floral bowls of this type for their ability to dramatically display the vibrant famille-verte palette. The craftsmen in Jingdezhen continued to work in the dominant style of the Kangxi period before they became acquainted with the developments in famille-rose of the Palace Workshops in Beijing. Yongzheng yuzhi marked famille-verte coral-ground bowls of this pattern were produced in Jingdezhen between 1722 and circa 1725, and between 1722 and 1728 with additional touches of famille-rose enamels. The exterior of this example is intricately painted with two registers of flowering peony blossoms on a rich coral-red ground, with the interior and base glazed in white. It is notable for both the unusual composition and colouring of the two bands of peony blossoms. 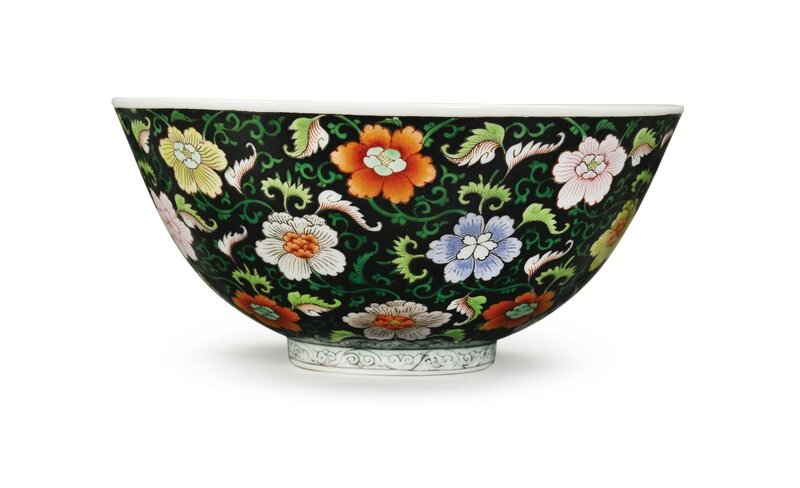 well-potted with rounded sides supported on a short foot, the exterior elaborately painted with a composite floral meander, the green leafy scroll bearing clusters of green scrolling tendrils, interspersed with iron-red leaves and floral blooms in iron-red, blue, aubergine, pink, blue, yellow and green enamels, all reserved on a black ground, the foot pencilled with a classic scroll band against a pale green ground, the interior and base glazed in white, inscribed with a six-character reign mark within a double-circle on the base

Note: Bowls of this type are extremely rare and only one other example appears to have been published, from the Fong Chow collection, sold at Christie’s New York, 21st/22ndMarch 2013, lot 1205. A similar design, described as ‘lucky flowers’, rendered on a slightly smaller bowl in the doucai palette, in the Nanjing Museum, Nanjing, is illustrated in The Official Kiln Porcelain of the Chinese Qing Dynasty, Shanghai, 2003, p. 132.

This bowl belongs to a small group of black ground wares with similarly enamelled designs consisting of flowers amongst green foliate scrolls, all with Yongzheng marks and of the period; a bowl decorated with a band of flowers on a leafy scroll, from the Charles Russell collection, is illustrated in R.L. Hobson et. al., Chinese Ceramics in Private Collections, London, 1931, pl. 347; another was included in the exhibition The Barbara Hutton Collection of Chinese Porcelain, Honolulu Academy of Arts, Honolulu, 1956, pl. XIIIa; a dish in the Shanghai Museum, Shanghai, is published in Zhongguo meishu quanji. Gongyi meishu bian, vol. 3, Beijing, 1988, pl. 202; another in the Victoria and Albert Museum, London, is included in Rose Kerr, Chinese Ceramics. Porcelain of the Qing Dynasty, London, 1986, pl. 23; and a third dish from the Wangxinglou collection is illustrated in Imperial Perfection. The Palace Porcelain of Three Chinese Emperors – Kangxi, Yongzheng, Qianlong, Hong Kong, 2004, pl. 33.

Bowls of this type are extremely rare and only one other example appears to have been published. A similar design, described as ‘lucky flowers’, can be found in the Nanjing Museum in China. This bowl belongs to a small group of black ground wares with similarly enamelled designs consisting of flowers amongst green foliate scrolls, all with Yongzheng marks and of the period.

each with deep rounded sides rising from a short foot to a flared rim, brightly enamelled to the exterior with a butterfly in flight amongst overhanging flowering and fruiting balsam pears and bamboo, the interior similarly decorated, inscribed to the base with a six-character seal mark. Quantité: 2.

A pair of bowls of this type, from the Sir Percival David collection and now in the British Museum, London, is published in Illustrated Catalogue of Ch’ing Enamelled Wares, London, 1958, pl. 897; a bowl in the Musee Guimet, Paris, is included inOriental Ceramics. The World’s Great Collections, col. 7, Tokyo, 1981, col. pl. 91; another is published in the Illustrated Catalogue of Tokyo National Museum. Chinese Ceramics, col. II, Tokyo, 1990, pl. 660; and a pair of bowls was sold in our Hong Kong rooms, 8th April 2011, lot 3086.

Both bowls show a brightly enamelled exterior with a butterfly in flight amongst overhanging flowering and fruiting balsam pears and bamboo, with a similarly decorated interior. A pair of bowls of this type can be found in the British Museum, London. of square section rising from a ring foot to a short tapering neck, the facetted body variously painted with a pair of swallow descending from overhanging prunus branches, two magpies and scenes of riverside landscape, the neck and foot enamelled in blue with bats and foliate floral sprays

Note: The provenance of this Republican Cong vase provides a fascinating history of its ownership. It was first recorded in the collection of Charles Russell (1866-1960) before passing through Sotheby’s London saleroom in 1946, where it was purchased by Chinese art dealer John Sparks. The vase then passed into private ownership once more before finding its way back to Sotheby’s in London in 1953, where John Sparks bought it for the second time. Sir Alfred Beit subsequently acquired it. The body of this famille-rose cong is painted with a pair of swallow descending from overhanging prunus branches, two magpies foretelling a happy meeting and scenes of a riverside landscape. The neck and foot are enamelled in blue with bats and foliate floral sprays.

Sir Alfred Lane Beit was born in London on 19th January 1903 to Sir Otto Beit (1865-1930) and Lilian Carter (1874-1946). Otto’s famous brother was Alfred Beit (1853-1906), the South African mining millionaire who created the family fortune. In 1906 Alfred died and Otto devoted the rest of his life to the administration of the Beit Trust and fortune. As heir to his brother’s fortune and a great lover of art, Otto added to the already important collection of paintings and objects, which was started by his brother Alfred. At the age of 27, Alfred Lane Beit, now Sir Alfred, inherited his father’s title, a large fortune and a world class collection of art. When not involved in politics or business, Sir Alfred was an art collector, pilot, skilled photographer, film maker and pianist. In 1939, following a short engagement, Sir Alfred married Clementine Mitford, a great beauty and first cousin to the Mitford sisters. Sir Alfred and Lady Beit made their home at 15 Kensington Palace Gardens, which Sir Alfred had bought and remodelled to accommodate his collection of paintings, bronzes, furniture and other treasures. During the Second World War, Sir Alfred served in the R.A.F. and in 1948, the Beits moved to South Africa where Sir Alfred continued his work as Chairman of the Beit Trust.

Apart from the Beit Trust, Sir Alfred had many business interests in Africa, including a large farm in Kenya. Despite the Beit’s love of Africa, they were distressed by the apartheid system that coincided with their move there and decided to leave in 1952. The decision to leave and find a new home was made easier by the fact that Sir Alfred had seen the great Palladian mansion of Russborough for sale in ‘Country Life’ magazine. He purchased Russborough in 1952 and moved in during 1953.

In 1976, the Beits created the Alfred Beit Foundation to preserve Russborough for the future enjoyment of the Irish people. In 1978, the house and grounds were opened to the public, for the first time in its history. The Irish Government and President Mary Robinson honoured Sir Alfred and Lady Beit for their generous benefaction to the State by making them Irish citizens in 1993. This was a rare honour and the first time Irish citizenship had been awarded to British citizens. Sir Alfred Beit died on 12th May 1994 aged 91 and Lady Beit died on 17th August 2005 aged 89. Sir Alfred & Lady Beit were both laid to rest at St Mary’s church, Blessington, County Wicklow, which is located just a few short miles from Russborough itself.