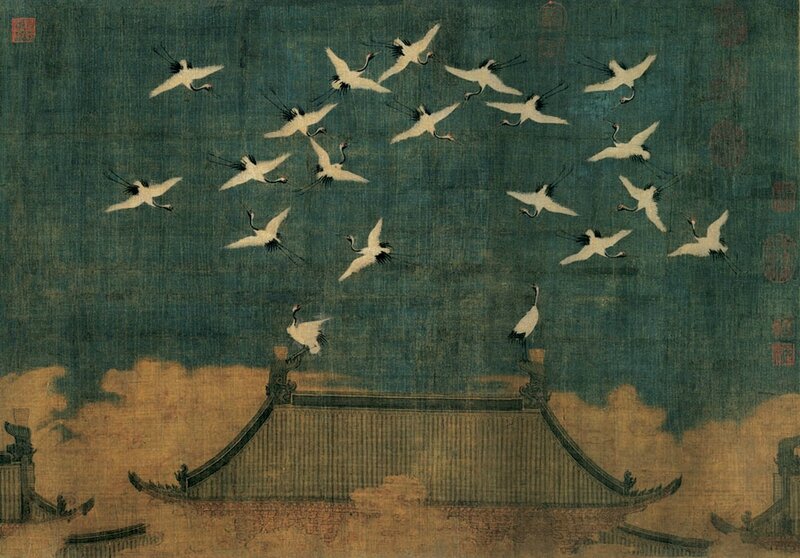 LONDON.- The V&A's autumn exhibition, Masterpieces of Chinese Painting 700-1900, is the most ambitious survey of one of the world's greatest artistic traditions. It gathers together the finest examples of Chinese painting created over a 1200 year period and shows more than 70 works including some of the earliest surviving Chinese paintings as well as other exceptionally rare works loaned from the greatest international collections. From small scale intimate works by monks and literati to a 14 metre-long scroll painting, many of the paintings are being shown in Europe for the first time.

The exhibition examines the recurrent themes and evolving aesthetics characteristic of Chinese paintings and looks at the constant interplay between tradition and innovation. It considers how paintings were created for a variety of settings from tombs, temples, palaces, domestic houses and private gardens and in a range of formats from banners, screens, hand-held fans to portable handscrolls and hanging scrolls. Materials, including a large chunk of ultramarine pigment created from lapis lazuli discovered in a 10th-century artist’s studio and studio equipment reconstructed according to a 14th-century manual reveal the technical process and traditional techniques employed.

Martin Roth, Director of the V&A said: "The V&A has been collecting and exhibiting Chinese art since the Museum was founded. It is an honour to present this once-in-a-lifetime experience of seeing the greatest examples of Chinese painting together and understanding how they were created. We are indebted to our numerous lenders around the world for allowing us a rare opportunity to present these magnificent masterpieces, a number of which are national treasures and have never before left Asia."

The exhibition has been organised chronologically and thematically in six successive periods to chart the evolving styles and subject of painting. It begins by exploring paintings made for tombs and temples from 700-950 in the section Object of Devotion. The majority of works were made for Buddhist liturgies or votive offerings by anonymous artists. Most surviving works from this early period are Buddhist banners and screens, painted on silk and characterised by their bright colours. These are predominantly drawn from Dunhuang, a remote region in the North West which was far from Tang dynastic control during this period of Buddhist persecution in the mid 9th century. The double-sided ceremonial banner Bodhisattva Wearing Monastic Robes showing a sacred and enlightened figure has been hung as a three-dimensional display allowing it to be appreciated as originally intended. Not all the works in this section are Buddhist; the large illustrated manuscript Five Planets and Twenty-Eight Mansions, attributed to Liang Lingzan, is a secular handscroll which is the earliest surviving painting of astronomy from the Imperial collection.

Quest for Reality: 950-1250 looks at the growing enthusiasm for the natural world and the rise of landscape painting. Realistic observations of mountain and river scenes, plants and animals, fishermen and travellers, the cycle of the seasons, changing weather and the shifting qualities of natural light were all subjects particularly favoured by artists during this period. These paintings captured compelling images of the real world and saw a shift to a more monochrome aesthetic. Monumental yet meticulously detailed landscapes such as Yan Wengui’s Landscape with Pavilion, characteristic of this time are shown alongside small scale views and poetic renderings for intimate use such as fan paintings. This section also includes the celebrated Nine Dragons by Chen Rong. Considered to be the oldest and finest dragon scroll, in which each of the mythical creatures are expressed in different positions amidst clouds, water and mountains, it represents the dynamic forces of nature in Daoism.

The most striking innovations in the next section Embracing Solitude: 1250-1400 came from small groups of monks and scholars who were equally skilled in painting, calligraphy and poetry and encapsulated all within their works. These artists did not depend for their livelihood on commissions for palaces and official buildings but instead paintings for private display. Against a backdrop of suppression by the Mongol Yuan dynasty, many educated people retreated to living in reclusion and expressed themselves through contemplative works which channelled their inner thoughts and emotions. Subject matter moved away from depicting reality to a more stylistic approach, often laden with literary, philosophical and personal associations. In Wang Mian’s Fragrant Snow at Broken Bridge, the early flowering plum which traditionally heralds the arrival of spring, instead blossoms through snowy branches - a potent emblem of purity and endurance in adversity. A powerfully expressive style of brushwork developed with an austere approach to the use of colour, seen on the free and spontaneous rendering of Two Chan Patriarchs in Contemplation attributed to Shi Ke. As with a small number of the most fragile paintings in the exhibition, one part of this diptych has been replaced with the other half way through the exhibition as they are unable to be displayed for more than six weeks.

Pursuit of Happiness: 1400-1600 explores the artistic explosion driven by the political stability and economic prosperity of the Ming dynasty. This stimulated a revival of demand from all levels of society for painting such as Four Pleasures, attributed to Ren Renfa, a series illustrating the delight in the literati pursuits of calligraphy, painting, music and games.

Artists returned to working on silk and using expensive pigments, cities such as Hangzhou, Nanjing and Suzhou became important new centres for painting. Subject matter ranged from romantic characters or episodes in history and literature, topographical views of famous sites and gardens and rare animals and plants. Many pictures were made for seasonal festivals or other auspicious occasions. Others were nostalgic evocations of earlier classical periods such as Qiu Ying’s Saying Farewell at Xunyang, which draws on the bright blue and green landscapes reminiscent of the Tang dynasty to convey a fairytale quality and Du Jin’s Court Ladies in the Palace, which shows ladies playing football in the palace before the custom of foot binding became commonplace.

Finally, Looking to the West: 1600-1900 examines the impact of the introduction of European painting to China. During the 18th and 19th centuries, when the country was ruled by the Qing, Western art became an increasingly significant artistic force. Chinese court painters began to interact with Jesuit missionary-artists, from whom they avidly learnt the laws of linear perspective and chiaroscuro. These techniques, modified to suit the Chinese aesthetic, were adopted to create the illusion of depth and light. The exceptionally long scroll Prosperous Suzhou by Xu Yang, noticeably draws on a Western use of perspective to depict urban life inside the city walls receding to the far distance. Fascination with European painting was not confined to the Imperial Court. In his Portrait of Gao Yongzi as a Calligraphy Beggar, Ren Yi utilises European ideas including a naturalistic depiction of a eye seen from the side for the first time in Chinese figure painting. In the new artistic centres of the south, Chinese painters looked to imported European prints and illustrated books, which inspired methods of painting and the incorporation of subject matter unknown to their predecessors. 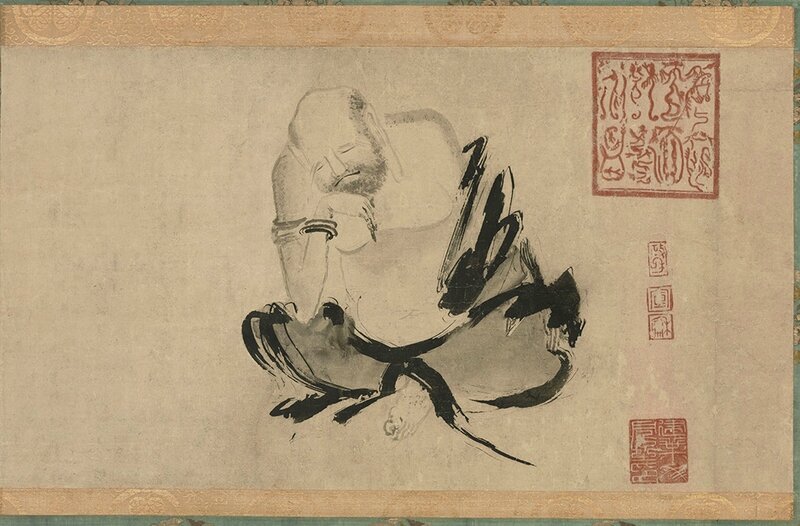 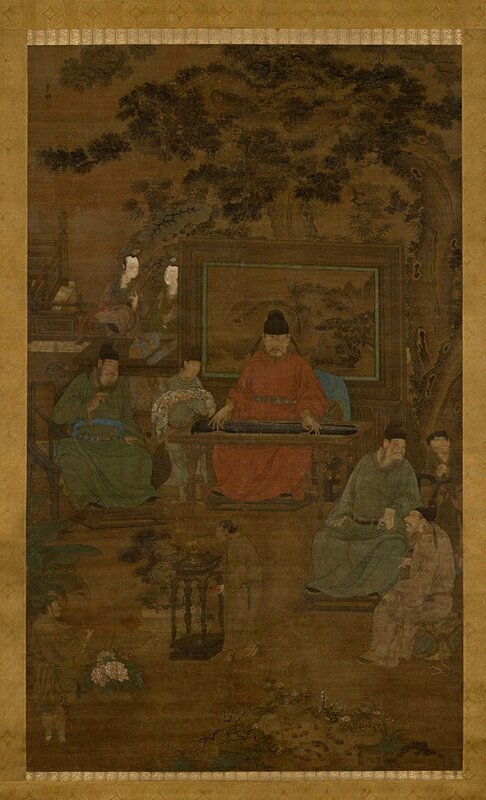