ROME.- Never before has such a considerable amount of masterpieces belonging to the most important collection of goldsmith art in the world, together with original documents, paintings, drawings, vestments and church plate, been exhibited beyond the walls of Naples.

This exhibition offers an opportunity to investigate the inestimable artistic and cultural value of the treasure of Saint Januarius from a scientific point of view.

The exhibition, curated by Paolo Iorio, Director of the Museo del Tesoro di San Gennaro, and Ciro Paolillo, a professional gemmologist and professor of history, economics and the production of jewellery in the Sapienza University of Rome, with the advice of Franco Recanatesi, will be an event of great historic and artistic importance: over ninety works belonging to one of the most important collections of goldsmith’s art will be displayed for the first time beyond the walls of the Parthenopean city, beside original documents, paintings, drawings, vestments and church plate.

The exhibition will offer an opportunity to investigate the inestimable artistic and cultural worth of the treasure of Saint Januarius from a scientific point of view, in order to rediscover, pass down and re-experience Naples on a journey through time and to protect its name, history, artists and, above all, this priceless heritage that has been collected over seven centuries.

With twenty-five million devotees scattered throughout the globe, Januarius is the most famous Roman Catholic Saint in the world. Amidst devotion and prejudice, faith and disbelief, his long history is closely connected to Naples, the citizens of which - periodically threatened by natural catastrophes and historical events - even closely identify themselves with their patron saint.

The exhibition to be held in Palazzo Sciarra will have both a scientific and an emotional approach, in order to explain the evolution of the cult of Saint Januarius in Naples, why the Treasure belongs to a secular institution and how Parthenopean goldsmithery was perfected over the centuries, thus creating most of the masterpieces on show.

In order to understand the impact of this event, suffice it to say that the historical value of the Treasure of Saint Januarius, formed throughout seven centuries of donations from Popes, Emperors, Kings and popular ex-votos, is higher than that of the Crown Jewels of the United Kingdom and those of the Tsar of Russia, as found during a research project conducted by a team of gemmologists led by Professor Ciro Paolillo, curator of the exhibition, the results of which were published in 2010. The team investigated several precious jewels donated to the Saint, which will be exhibited in Rome, for three years. Moreover, unlike other dynastic and ecclesiastical heritages, the Treasure has remained intact ever since it was formed and has never endured spoliation, nor have the jewels ever been sold to fund wars. It has constantly been increased by means of acquisitions and accessions.

Professor Emmanuele F. M. Emanuele, Chair of the Fondazione Roma, says, “I believe it is essential to spread knowledge of this priceless heritage belonging to our country, the preservation and enhancement of which constitutes a strategic asset for the culture market. It is precisely due to its commitment in this field that the Fondazione Roma, by means of the activities performed by Fondazione Roma-Arte-Musei, has, in time, become a point of reference for the balance of the demand and supply of culture in the Eternal City. The exhibition devoted to Saint Januarius fully qualifies to be included in the cultural project promoted by our institution, which aims to spread all forms of art as an element of social development. The attention we pay to the relationship between culture and the community constitutes the link between the activities performed by the Foundation and those of the Museo di San Gennaro, which has led to the accomplishment of this important exhibition that will allow the public to admire, for the first time, works which, due to their preciousness and strong connotations of identity, have never been shown beyond the walls of Naples”.

Paolo Jorio says that, “Each work of art belonging to the Treasure of Saint Januarius expresses its intrinsic artistic wealth, fruit of the unequalled craftsmanship of sculptors, silversmiths, chasers, welders and ‘put togetherers’ (as the assemblers were called in those days) who were capable of creating masterpieces of rare beauty using their technical know-how and creativity, and also tells the extraordinary story of a people and its ancient civilization. An account that that places the Neapolitan people and European monarchs on the same level, since they all paid homage to Saint Januarius in a secular way and donated priceless masterpieces to the city of Naples”.

The exhibition will revolve around the two most extraordinary masterpieces of the Treasure: the Necklace of Saint Januarius, in gold, silver and precious stones created by Michele Dato in 1679, and the Mitre, in gilded silver, 3326 diamonds, 164 rubies, 198 emeralds and 2 garnets, created by Matteo Treglia in 1714, the Tricentennial of which is celebrated this year.

Interestingly, Queen Marie Josè, consort of Umberto II of Italy, was attending a private visit to the Chapel of San Gennaro in 1933 and having nothing to donate, she removed the ring she was wearing and offered it to the saint. This regal gift is now to be found on the necklace.

When landing in Naples, even Napoleon, who plundered everywhere, not only refrained from stealing but, for once in his life, actually donated. In fact, when entering Naples in 1806 Joseph Bonaparte donated, as advised by his brother, a cross of diamonds and emeralds of rare beauty which the Deputation then included amongst the jewels bestowed by sovereigns that compose the priceless Necklace of Saint Januarius. Napoleon’s brother-in-law, Joachim Murat, who married beautiful Caroline Bonaparte, also paid heed to the advice of the French Emperor and donated a monstrance in gold and silver with precious stones in 1908. Both masterpieces will be exhibited in Rome.

A amongst the paintings there is a portrait of Saint Januarius depicted in 1702 by Solimena, the most famous authentic chromatic masterpiece in the world since, as from that year, all the holy pictures of the patron saint of Naples have been inspired by this painting.

The Mitre, the Tricentennial of which is celebrated this year, was commissioned by the Deputation in order to be placed on the bust during the festive procession held in April 1713. It was created in the Antico Borgo Orefici, established by the Anjou monarchs, which was an authentic mine of talents including the author, the maestro goldsmith, Matteo Treglia. The Mitre has an enormous material and symbolic value.

The gemstones also reveal another fascinating affair. Several gems have been found to come from the ancient quarries in Latin America. Ciro Paolillo affirms that, “thanks to Treglia’s devotion, today we are looking at one of the world’s most beautiful collections of emeralds belonging to the ancient people of South America, consequently these gems are valuable both for their preciousness and history”.

The exhibition in Rome will also be an opportunity to discover more treasures such as the Cross in silver and coral dated 1707, donated by the Spera family, which demonstrates the widespread use of coral and silver in Naples during the Baroque period, both in secular and religious circles.

The Chalice in gold, rubies, emeralds and brilliants commissioned by Ferdinand of Bourbon and created in 1761 by the court goldsmith, Michele Lofrano. The Monstrance in silver and rubies (1808) donated, as suggested by Napoleon, as an act of devotion to the patron saint by Joachim Murat when he arrived in the city. The Pyx adorned with gold, rubies, sapphires, emeralds and brilliants offered by King Ferdinand II in 1831. The Monstrance in gold, precious stones, pearl beads and enamel, a splendid example of an almost neoclassical artefact inspired by Baroque models. Maria Theresa of Austria donated the Monstrance on the occasion of her marriage to Ferdinand II. The Chalice in pure gold donated by Pope Pius IX in 1849 to thank Neapolitans for their shelter during his exile caused by the Mazzinian revolts in Rome. This is one of the few exhibits that are not of Neapolitan craftsmanship since it was produced in Rome by the goldsmith Valadier. The Episcopal Cross in gold, pure emeralds and brilliants with a gold cord, bestowed to the Chapel of the Treasure by King Umberto I and Queen Margherita of Savoy on the 23rd of November 1878 during the first visit to Naples after their accession to the throne, in order to pay homage to the patron saint of the city. Finally, the Pyx in gold, coral and malachite created by the Ascione family from Torre del Greco and donated by Umberto of Savoy on the 5th of November 9131 when he moved to Naples with the queen consort Josè.

The two Splendours are works of exquisite Baroque taste, designed by Bartolomeo Granucci (1774) and created by the silversmith, Filippo del Giudice. They are named as such due to the magnificence and grandeur of their size (h 365 cm). The candlesticks, bestowed by Charles III of Bourbon and Maria Amalia of Saxony, stand before the balustrade of the High Altar. The putti on the terrestrial globe and the six virtues, Faith (the Chalice), Hope (the anchor) and Charity (a woman breast-feeding a child), are in full relief. The three allegories on one candlestick, which perhaps enhance the merits of Charles of Bourbon who contributed with two thousand ducats, correspond to the three theological virtues on the other. The three allegories are: Strength (a woman wearing a helmet on her head, a shield on her arm and a spear in hand), Meekness (a woman with a lamb) and Good Governance (a woman bearing the globe). The documents clearly state that the Splendours were donated by King Charles III of Bourbon and Queen Anna Amalia of Saxony and commissioned by the Deputation, though the name of any member is ever mentioned. 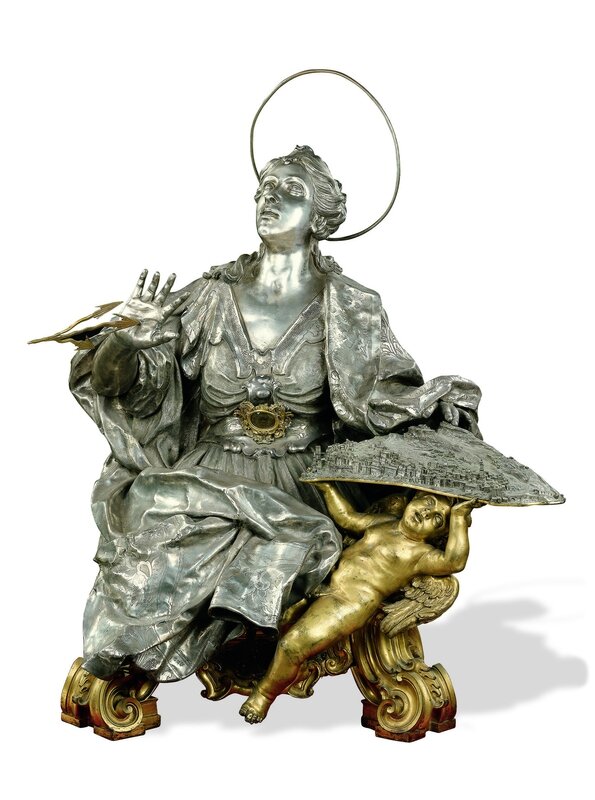 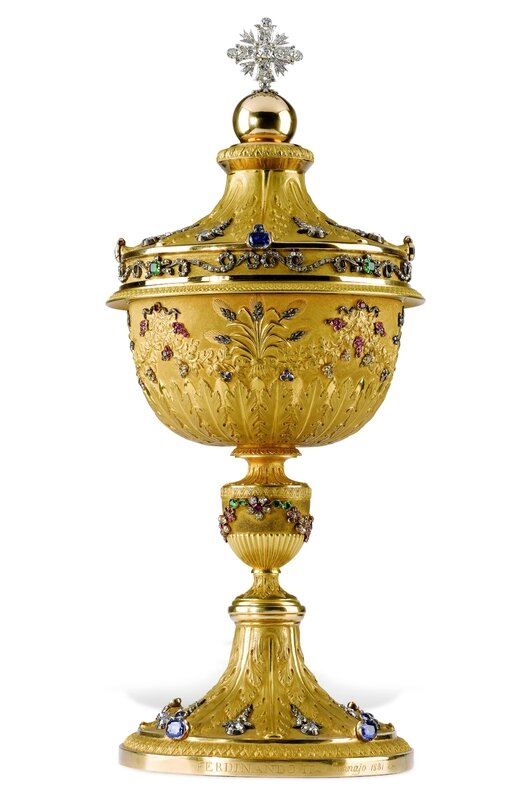