Painted around the body in the manner of an unrolling scroll with two bearded sages and a young attendant emerging from rockwork and pine towards two bearded scholars seated playing 'weiqi' at a simple table, the design all below a horizontal border simulating herring-bone pattern silk mounting, and above a characteristic band of wet dots 19.5cm (7¾in) diam. Estimate £55,000 - 65,000 (€66,000 - 78,000) - Unsold 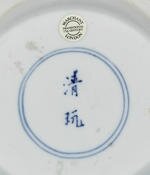 The exaggerated curve of the sides of the present lot is particularly notable, and places this brushpot within a small group of such strongly-potted wares dating to the early Kangxi period. The 'wet dot' band at the foot and the two-character Qing Wan mark also suggest an early Kangxi date. See for example a similarly shaped brushpot from the Shanghai Museum with a Qing Wan mark, also with 'wet dot' marks at the foot and 'cracked-ice' at the rim, and with a similar style of continuous landscape painting on the flaring sides, illustrated inSeventeenth Century Jingdezhen Porcelain from the Shanghai Museum and the Butler Collections: Beauty's Enchantment, Shanghai, 2005, pp.238-239, no.82.

Compare a related but slightly smaller brushpot dated to the early Kangxi period and also with the Qing Wan mark, sold in these rooms, 10 November 2011, lot 136.