A wucai 'dragon and phoenix' bowl, Qianlong seal mark and of the period

A wucai 'dragon and phoenix' bowl, Qianlong seal mark and of the period 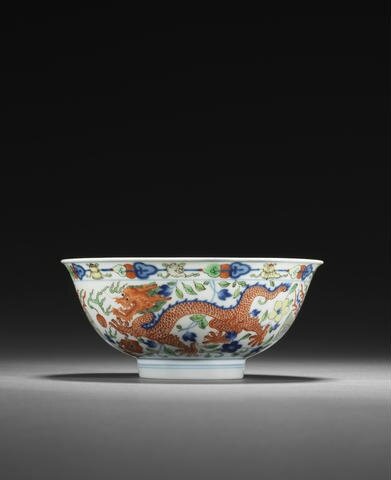 Rising from a recessed circular foot, the wide body rising to a lipped rim, the cavetto with five-clawed dragons chasing flaming pearls and phoenixes amidst floral and leafy vines, all beneath a band of ruyi-head scrolls between auspicious Buddhist emblems, the interior with a central dragon medallion with claws reaching for the flaming pearl amidst clouds engulfed in flames. 14.8cm diam.

Note: The particular decoration of a dragon and phoenix is inspired by Kangxi period prototypes. The design was so successful that several later reigns of the Qing Dynasty produced their own versions of this composition with its brilliant distinctive styles. For an example of a Kangxi bowl, see The Complete Collection of the Treasures of the Palace Museum: Porcelains in Polychrome and Contrasting Colours, Shanghai, 2007, p.148, pl.136, and also a very similar dragon and phoenix bowl dated to the Qianlong period, illustrated in ibid., p.172, pl.158; Another Qianlong example is in the Nanjing Museum, illustrated in Treasures in the Royalty: The Official Kiln Porcelain of the Chinese Qing Dynasty, Shanghai, 2003, p.282.

Commentaires sur A wucai 'dragon and phoenix' bowl, Qianlong seal mark and of the period