HONG KONG.- A collection of extraordinary Yixing stoneware teapots and scholar’s objects from Mr & Mrs Jimmy Sha will go under the hammer at 1:30pm on 24 November at the Island Ballroom of the Island Shangri-La Hotel In Hong Kong.

The Masterpieces of Yixing Stoneware from the Mr & Mrs Jimmy Sha Collection consists of 22 pieces of Yixing stoneware teapots and scholar’s objects of the most extraordinary quality that have ever appeared at auction in Hong Kong before. The exquisite and scholarly taste of the connoisseur is reflected in this meticulous yet careful selection of Yixing stoneware that were not only commissioned by the Chinese Emperor but also jointly crafted by famous potters and eminent scholars of the Qing dynasty. One of the highlights of this collection is a Qianlong slip-painted and appliqué-decorated ‘lotus’ teapot and cover, formerly in the collection of Gong Xinzhao (1987-1949), who was appointed the Chinese Ambassador of the Post-Confederation Canada during the final year of the Guangxu era (1908). Another is an inscribed ‘mansheng-type’ Yixing stoneware teapot and cover, jointly made by two prominent Yixing potters of the 19th century, Wang Dongshi and He Xinzhou, and produced from the special workshop known as ‘Yucheng’ near the city of Ningpo in northeastern Zhejiang province. The superb quality of this teapot bears witness to the outstanding craftsmanship in a strong scholarly taste that even exceeded their predecessors known as the 'Mansheng Pots'. The collection also includes three teapots made by Gu Jingzhou (1915-1996), the most outstanding Yixing potter of the 20th century in China. Elegantly potted resembling a guan jarlet, the recessed circular base rising to a short lipped rim, flanked by a slim curved spout and a 'C'-shaped handle on opposing sides, the domed cover further surmounted by a compressed spherical knop, the exterior plain and undecorated only with a six-character zhuanshu seal mark at the base, the stoneware of a cocoa brown colour with fine red speckles. 12.8cm wide. (2). Estimate HK$ 300,000 - 400,000 (€29,000 - 38,000)

Sao Boyuan, whose name is not found in historical records, is believed to be a native Yixing potter active during the early Qing dynasty with reference to similar examples excavated from the Dingshu county of Yixing. 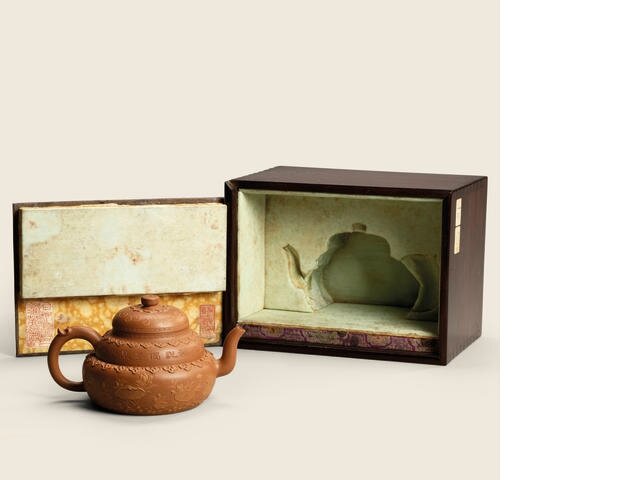 Demonstrating masterful skills and encapsulating the epitome of fine craftsmanship, carefully potted in two tiers with the domed cover and flattened knop forming the third and fourth, separated by two bands of incised key-fret scrolls meeting at the mouthrim, each layer bordered by a band of appled auspicious ruyi heads, the lowermost frieze beautifully embellished with a continuous aquatic scene featuring lush growths of lotus blossoms, buds, pods and leaves all superbly applied to the plain surface, flanked on each side with an upward curled spout and a 'C'-shaped handle with a ruyi-head thumb rest, the recessed circular base with an Imperial six-character zhuanshu seal mark, the stoneware of an evenly rich cocoa brown colour, fitted box. 14.6cm wide. (3). Estimate HK$ 4.5 million - 5.5 million (€430,000 - 530,000) Slip painting decoration on Yixing stoneware began before the early eighteenth century and was already very accomplished during the Yongzheng period (1723-1736). In order to achieve the best result of decoration, it required a high level of sophisticated and precise skill to grind, blend and paint the slip on the stoneware body, so that the slip-painted decoration does not distort during the firing process. The present teapot represents one of the finest examples of slip-painting decoration. Every detail is well rendered by the skilful painting of the finely ground slip with a lighter chocolate-brown colour over the base original rich cocoa brown tone. For a Qianlong mark and period teapot with similar form and decoration in the Palace Museum, Beijing (fig.1), and probably made for the birthday of the Qianlong Emperor, see Geng Baochang, The Complete Collection of Treasures of the Palace Museum: Purple Sandy Ware, Shanghai, 2008, pp.30-31, pl.24; another nearly identical teapot to the Palace Museum example with a more reddish tone (fig.2), is illustrated by Han Qilou and Xia Junwei,Zhongguo zisha minghu zhenshang, Shanghai, 2001, p.69, pl.82. For examples of Qianlong mark and period teapots with similar 'lotus pond' decoration, see a square teapot dated to the Qianlong period, also with slip-painted Imperial poems and lotus pond decorations from the Capital Museum, Beijing (fig.3), illustrated by Gao Yuchen and Huang Mingtang, The Treasurable Violet Sand Teapots in all Dynasties in China, Taipei, 1995, p.31, and another Qianlong marked teapot but dated to the Jiaqing period, from the Qing court collection, now in the Palace Museum, Beijing (fig.4), by Wang Jianhua, Yixing Zisha Wares in the Palace Museum, Beijing, 2009, p.93, pl.33. A similar example also dated to the Qianlong period, but with incised Imperial poems instead of slip-painted decoration, currently in the Shanghai Museum, is illustrated by Wu Shan, Zhongguo zisha cidian, (The Thesaurus of Chinese Purple Clay Wares), Jiangsu, 2007, p.8.

Gong Xinzhao (1870-1949) is known not only for his calligraphy but also for his extensive collection of fine Chinese works of art. As a native of Hefei in Anhui province, Gong received his 'Jinshi' degree at the Imperial examinations in 1895. He worked as the secretary of the Hanlin Academy and later was appointed as the diplomat and ambassador of the Manchurian Empire in Britain, France and Canada during the Guangxu period (1875-1991). Gong was able to access the most outstanding collections of Shang dynasty bronzes, Song dynasty ceramics, classical Chinese paintings by Mi Fu (1051-1107), Ma Yuan (c.1140-1225) and Xia Gui, and masterpieces of Yixing teapots due to his extensive connections with other diplomats as well as aristocrats at the time. Most of his collections were donated to the Shanghai Museum during the 1960s and only a miniscule amount was left available to private collectors. The present teapot, along with lots 105 and 118, represent the expensive and discriminating taste of Gong as a successful connoisseur after 1900. The short but wide cylindrical body rising from a recessed base, one side intricately incised with a series of lishu inscriptions followed by the artist's signature, the shoulders further decorated with an eight-characterzhuanshu inscription, flanked by a compressed spout and 'C'-shaped handle, the gently domed cover surmounted by an arched knop, the base impressed with a four-character zhuanshu seal mark, the stoneware ranging from a pale to rich earthen brown colour.
16.3cm wide. (2). Estimate on request Wang Dongshi who had lived during the Tongzhi and Guangxu periods (1862-1908) was known for his skills in making teapots imitating archaistic forms and had the reputation of working with a number of prominent scholars such as Hu Gongshou (1823-1886) and Ren Bonian (1840-1895). He Xinzhou (circa 1829-1897) whose zi is 'Shilin' andhao is 'Man tuo hua guan' was active during the second half of the nineteenth century, not only as a potter, but also a calligrapher and carver. From a young age he worked closely with a group of prominent artists from Shanghai such as Ren Bonian, Hu Gongshou and Xu Gu (1824-1896). Under the patronage of the scholar and teapot enthusiast, Mei Tiaoding (1839-1906) and the nobles from both Shanghai and Zhejiang areas during later times, he moved together with his potter-friend, Wang Dongshi to Ningbo, to produce teapots for the literary circles.

For another teapot made by He Xinzhou from the K.S.Lo collection, currently in the Flagstaff House Museum of Tea Ware, see K.S.Lo, The Stonewares of Yixing - From the Ming period to the Present Day, Hong Kong, 1986, p.114, pl.54; see also a stoneware snuff bottle made by the same artist, formerly in the Mary and George Bloch collection, sold at Bonhams Hong Kong, 25 May 2011, lot 115.

The workshop was set up in the courtyard of the Lin Family under the patronage of Mei Tiaoding (1839-1906) and was named 'Yucheng', a word that was adopted from the Song dynasty inscription by Zhang Zai (1020-1077) which expresses as a metaphor that one should endeavour to secure success just like one cherishes his jade. Although the workshop was only producing teapots specially commissioned by scholars and teapot connoisseurs, it was able to attract famous carvers and calligraphers as well as other leading artists to work together to create some of the finest teapots in a strong scholarly taste that even exceeded their predecessors known as the 'Mansheng Pots'. 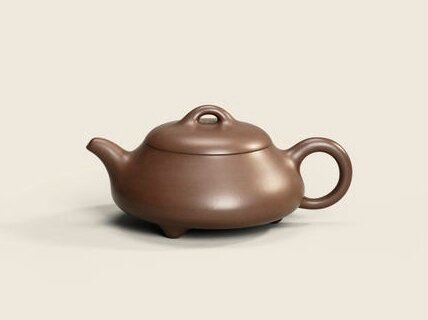 Of classical compressed inverted conical shape raised on three pointed feet, the sloping shoulders flanked by a short spout and a 'C'-shaped handle at the opposing ends, the gently-domed cover set with semi-circular looped knop, the base impressed with a four-characterzhuanshu seal mark, another two-character zhuanshurectangular seal mark of the potter towards the underside of the cover, the stoneware of a dark brown colour with purplish hue. 18cm wide. (2). Estimate HK$ 3.5 million - 4.5 million (€340,000 - 430,000) The form known as 'shipiao' or 'stone-spoon' first appeared in the nineteenth century on Yixing teapots made by Yang Pengnian, and usually were collaborative efforts made with reputable scholars such as Chen Mansheng and Qu Yingshao. Although such particular forms were followed by many potters from the early twentieth century onwards, it was Gu Jingzhou who dedicated himself to improving them to a new developed shape which provided more aesthetic and functional benefit. Compare other two Yixing teapots of earlier period within this collection for examples of the traditional 'shipiao' form, lot 103 and lot 115. Compare two more 'shipiao' teapots jointly made by Gu Jingzhou and Wu Hufan (1894-1968), illustrated by Gu Jingzhou, Yixing zisha zhenshang, Hong Kong, 1992, p.192, no.194; and another, formerly in the Jiansongge collection, illustrated by Xu Xiutang, Shan Gu, Zisha tai dou Gu Jingzhou, Shanghai, 2004, p.51, sold at Poly Beijing, 4 June 2013, lot 7522.