Bernardo Polo (active Zaragoza circa 1650 - circa 1675), Still life with a blue bowl of pomegranates and peaches, a plate of wh

Bernardo Polo (active Zaragoza circa 1650 - circa 1675), Still life with a blue bowl of pomegranates and peaches, a plate of wh 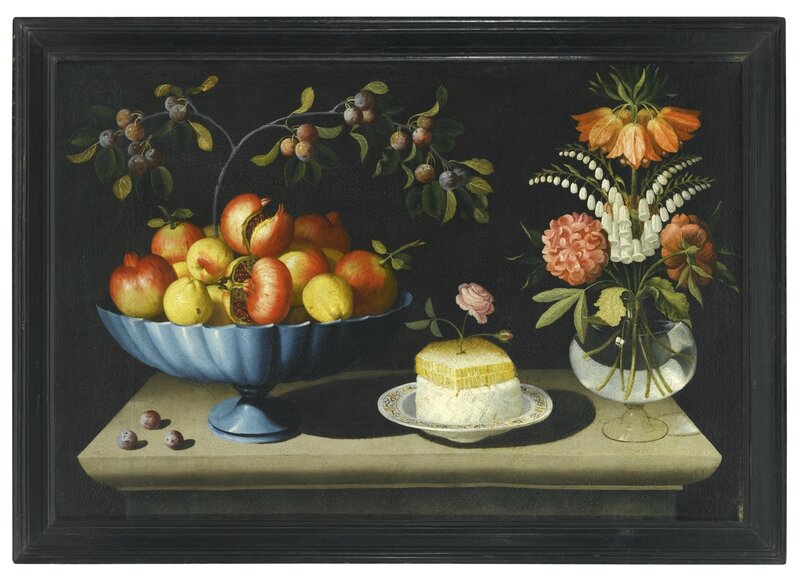 Bernardo Polo (active Zaragoza circa 1650 - circa 1675), Still life with a blue bowl of pomegranates and peaches, a plate of white cheese with a honeycomb and a rose, and flowers in a glass vase. Photo courtesy Sotheby's

Provenance: Private collection, Spain, since at least the 19th Century;
Until sold ('Property from a Spanish Private Collection'), London, Sotheby's, 11 December 2003, lot 29, for £84,000;
With Rob Smeets, Milan:
From whom acquired by the present owner.

He was distinguished for painting flowers and fruit from life: his canvases are high prized in that city (Zaragoza) and Madrid, where they hang in the galleries of private collectors.5

Bernardo Polo is recorded as working in Zaragoza, the capital of Aragón, during the third quarter of the 17thcentury. According to the contemporary biographer Antonio Palomino, he had a ‘very special skill’ for painting florerosand in his Diccionario histórico de los mas ilustres profesores de las Bellas Artes de España (published in Madrid in 1800), the Spanish writer Juan Agustín Céan Bermúdez observes that Polo’s work was held in high esteem and was collected by connoisseurs both in Zaragoza and Madrid.1

Despite these early accounts of Bernardo Polo, it was not until 2009 that the first securely attributable still life by the artist came to light – a painting of a Still Life with Melons, Grapes, Apricots and Plums on a Pewter Dish, which is signed by the artist in exquisite calligraphy scratched directly into the wet paint (see fig. 1). Its emergence unlocked the mystery of the authorship of a corpus of over forty still lifes by the same hand which had hitherto been grouped under the pseudonym the Pseudo-Hiepes, coined by Dr. William Jordan and Dr. Peter Cherry at the time of the ground-breaking exhibition on Spanish still life painting held at the National Gallery in 1995, on account of the paintings’ stylistic affinities with the work of the Valencian still life painter Tomás Hiepes.2

The recently emerged signed work by Polo not only shares the same handling as the still lifes formerly ascribed to the Pseudo-Hiepes, but furthermore the composition (which may have been reduced at the sides) is incorporated within two larger still lifes by the artist, in which the plate of melons, grapes, figs and vines in the signed picture are flanked by a vase of flowers and a wine cooler, adhering to the artist’s standard and highly symmetrical compositional format.3 The tendency to repeat certain objects or motifs within his own works is common within Polo’s oeuvre and indeed the distinctive combination of the ceramic dish with a cheese, honeycomb and rose atop in the present still life recurs in a painting by Polo which forms part of a surviving set of six pictures of the artist’s best quality, today in a private collection, Madrid.4

As pointed out by Dr. William Jordan, the present works share numerous affinities with the aforementioned group of six and indeed may originally have formed part of the same set. The paintings are of almost identical dimensions and two of the works within the set share a similar overall mise-en-page to the present work, constructed around three principal objects arranged in a symmetrical format on a stone ledge, set close to the front of the picture plane. Common to each of the pictures is the expansive arrangement of the still life elements that fill the majority of the picture surface, creating a sense of horror vaccui, as well as the dramatic fall of light from left to right, casting long shadows to the right of the still life elements and defining their strong geometric forms. Whilst the style is ultimately Caravaggesque, the paintings are characterised by a naivety both in the formal, highly symmetrical compositional designs and the limited sense of spatial awareness, and yet the overall decorative effect  is nothing short of spectacular.

Polo’s commercial working practise remains the subject of some conjecture. Within the artist’s identified oeuvre of well over forty works there exists a clear variation in quality that suggests that he ran a highly commercial and active workshop. His use of set formulaic types must also have lent itself well to the use of studio assistants in the production of large series of still lifes to adorn the interiors of his patrons’ palaces and grand houses both in Zaragoza and Madrid. Within Bernardo Polo’s known corpus of work however, the present painting can be considered of his best quality and may well have formed part of the artist’s most important set of still lifes known today.

We are grateful to Dr. William Jordan and Dr. Peter Cherry for endorsing the attribution to Bernardo Polo.

Commentaires sur Bernardo Polo (active Zaragoza circa 1650 - circa 1675), Still life with a blue bowl of pomegranates and peaches, a plate of wh