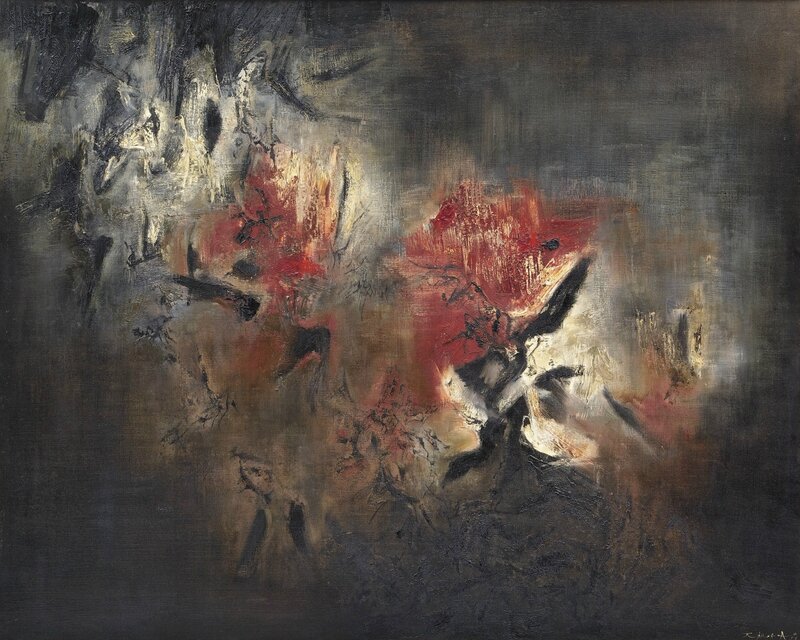 “The wind is soaring, the water roars. Movements of the cosmos travel across the canvas from one side to another, like a wild horse on the loose. The sky is shrouded with thick, dark clouds, the sea rough with waves. As the tide of nature returns over and again, this enormous power passes through all the ages…the painter has found the great way of light, colors and materials, returning with their secrets in hand. This is no simple return – with his unique perspectives, the artist has opened up for us a world of shapes and forms, derived from the inner universe of external appearances.” These are comments from former French Prime Minister Dominique de Villepin on Zao Wou-Ki’s paintings, an interpretation filled with poetry and admiration. Just as Villepin had put it, Zao Wou-Ki’s art is a “visual revolution”. Through his paintings, he continuously presented novel concepts and perspectives, creating new structures for his paintings, leading the viewer into a free-flowing, rhapsodic domain of boundless imagination.

In 1954, Zao Wou-Ki’s painting revolution moved into a critical phase. He was no longer satisfied with the depiction of external appearance and specific narrative of landscape and scenery. Instead, he quietly delved deep into the ancient Chinese culture, to examine objects which he knew so well and admired so dearly ever since he was a child, objects such as bronze vessels for religious rituals, metals and stones, as well as inscriptions and calligraphy – he was inspired to invent his own rustic, ancient characters through the intricate use of thick, black lines on canvas. Most of the time, the meanings of these characters are unidentifiable. Some are broken into segments, some are joined together in a certain order; collectively they create a fresh, new conceptual world of space. It was during this time when his creative output progressed into the “oracle bone period”, in which he explored the nature of painting using an approach that does not rely on specific narrative. A large number of deeply affecting pieces was created, many of which are held at leading art museums worldwide. Abstraction (1958) in the current auction is a highly-developed, representative work from this period.

A timeless treasure of exceptional value, extremely rare and sought after worldwide

Abstraction was shown at Galerie Charpentier in 1958, as part of a large-scale exhibition entitled École de Paris, or School of Paris. Located directly across the residence of the French President, Galerie Charpentier was renowned for the gallery building’s exquisite architecture and its leading status in the art world. Also exhibited in the same period were works by Hans Hartune, a well-established artist at the time, as well as John Levee, an American abstract expressionist painter. Abstraction was a highlight at the exhibition and attracted extensive attention worldwide, sparkling many exciting debates. The work was once held by Myriam Prévot, gallery owner of Galerie de France and subsequently by renowned art collectors Mary L. and Leigh B. Block from Chicago. The latter’s collection focused mainly on 19th century American art and contemporary art, including works by Max Beckmann, Jasper Johns, Jean Arp and Joan Miró. They however admired Zao’s paintings and decided to acquire his work. This reflects their appreciation of Zao Wou-Ki’s artistic vocabulary which stands out as highly individual and unique amongst the vast world of Western fine art. Abstraction was later acquired by the Art Institute of Chicago, where it remained for over five decades. It is indeed an extremely rare occasion for this work to be offered in an auction.

The pulse and rhythm of the primordial universe

“I want to convey the sense of movement – be it intricately tender, or be it swift and soaring. For me, a boisterous uproar is more attractive than quietness and silence.” – Zao Wou-Ki

The vast canvas of this painting is infused with ink-black, earthly maroon and violet blue, on which solid black lines suffused with power travel from the center towards the edges. Unknown characters and symbols float in the open space of air and light, as if they have broken free from the force of gravity. Each one of them is derived from another, bouncing and crashing into each other with a force of its own. The space expands and contracts, breathlessly capturing the viewer’s complete attention as one tries to decipher and experience the secrets behind. As one lingers in this sphere of imagination, the viewer suddenly sees, in the center of the canvas, rich shades of primary red piercing through the thick layers of dark clouds to engage in an intensive combat with the mysterious white light and ink-black darkness. In this boisterous battle, crimson red flame burns fiercely, in an attempt to turn the immense weight of this world into ashes. An instant later, brilliant, glittering sparks fly. It is as if the artist is depicting the echoes of the cosmos’ formation from distant primordial time. In this dramatic symphony of colors and light, the pulse and vibration of all beings in the universe were summoned and captured, drawing the viewer’s soul with an awe-inspiring power. The pulsating sense of vitality reveals to us some deeply buried secrets of the universe, like alchemy, or music.

This piece reminds the viewer of words by French critic Florence Delay: “Night has never fallen in Zao Wou-Ki’s paintings, because of their omnipresence at every moment. When night falls in Biarritz, the sun is rising in other places. The ancient Egyptian god of the sun once said, ‘I am yesterday, and I know tomorrow’. The artist we dearly love is a bit more humble, and would rather belong to both. With his paint brushes, he roams freely between the drastically diverging understanding of matters between the West and the Far East. Abstraction’s composition is formed by a flurry of colors as wild as a gale, shattering all feelings into pieces. The inner life has no title. We channel our passion into this soulful landscape, where oxidised residues of pain and sorrow sink into the painting’s base, as it leads us to the secret of painting.” Darkness and light have always co-existed. Through his work, Zao Wou-Ki illustrates to us the ever-evolving journey of life, and its cyclical nature where the end is also the beginning. His work encapsulates a healing power for the heart.

A rejuvenating power shining through the dark

His work is, at the same time, a distillation and projection of his personal experience. In 1957, after a 16-year marriage, Lalan and Zao Wou-Ki divorced. The depressed and sorrowful Zao Wou-Ki created Nous Deux. Although it shows fascinating similarities to Abstraction, which is offered in the current auction, the emotions conveyed in the two paintings are distinctly different. The former, as described by Villepin, shows that “chaos is wreaking havoc. In the pale, dim red glow, two black shadows face each other silently. They seem to be fighting hard against something, and in the painting, a dark force decades from above.” Reminiscing a love gone by, Zao Wou-Ki buried his sorrow deep inside his painting, filled with melancholy and pain, mourning the irreversible passage of time. In Abstraction, the viewer can still sense the chaos and commotion, yet two bright, red masses of colors were added, like two flames of life shining bright in the dark sphere. This emotion may be traced back to Zao’s romance with beautiful Shaw Brothers Studio actress Chan May-Kan. The two met in Hong Kong in 1958 and fell deeply in love. In Abstraction, the two flames may well be two people in love, lighting a light for each other in the dark, looking after one another. This interpretation would reflect the artist’s intense emotions inside as his heart was touched by the new romance.

In 1958, Zao Wou-Ki decided to stop giving titles to his paintings. Instead he only named a painting asUntitled/Abstraction or marked the work with its completion date. According to the artist, his painting entered an irreversible new phase that year, when he began to seek inspirations from his own internal world, delving deep inside, exploring the relationship between colors – how they mingle with, stand against, love or reject one another, as he boldly and openly faced the intricacy of his own emotions. During the same year, Zao Wou-Ki also moved to a larger studio, and the space allowed him to create large-format new works without physical restrictions, and indeed he freely expressed his rapturous emotions and infinite inspirations in the new space. Abstraction is a profound landmark and a critical turning point of the artist’s personal life and creative career, gripping and emotionally engaging, powerful and unforgettable all at once.