'Court and Craft: A Masterpiece from Northern Iraq' at The Courtauld Gallery, London

'Court and Craft: A Masterpiece from Northern Iraq' at The Courtauld Gallery, London 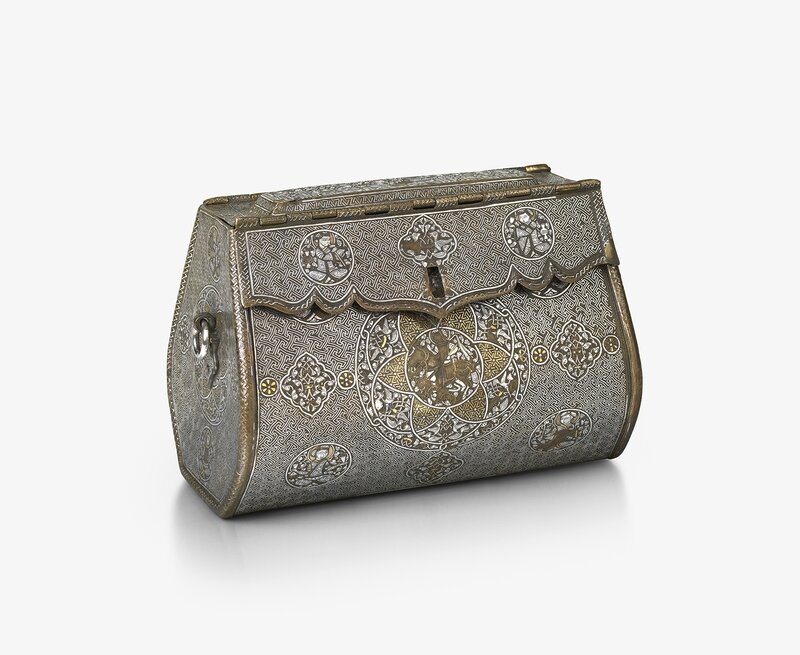 This exhibition explores one of the most rare and beautiful objects in the collection of The Courtauld Gallery: a brass bag inlaid with gold and silver, made in Northern Iraq around 1300. Decorated with a courtly scene showing a couple surrounded by their retinue of courtiers as well as musicians, hunters and revellers, it ranks as one of the finest pieces of Islamic inlaid metalwork in existence. A rhyming inscription, composed specifically for the bag, and intricate geometric patterns complete the decoration of this splendid luxury item. No other object of this kind survives. The exhibition will explore the origins, function and imagery of this masterpiece, as well as the cultural context in which it was made.

Despite its rarity and exquisite craftsmanship, this superb object remains little known or understood. Acquired by the Victorian collector Thomas Gambier Parry in 1858 and bequeathed to The Courtauld by his grandson in 1966, this object was for many years thought to be a wallet or document carrier, or even a saddlebag. The exhibition proposes that it is in fact a handbag or, more properly, a shoulder bag, made in the city of Mosul in northern Iraq around 1300-30. Its owner is likely to have been a high-ranking woman at the court of the Il-Khanids, the dynasty established in the region by the grandson of Chinggis Khan (known in the west as Genghis Khan). Through some forty works on loan from international collections, the exhibition will explore the origins, function and imagery of this masterpiece, as well as the cultural context in which it was made.

THE BAG
The bag is likely to have been conceived as an inlaid metalwork version of a luxury textile or leather bag. The 14th century illustrations of the Il-Khanid court, pasted into an album in the late 18th century by a German bibliophile, Heinrich Friedrich von Diez, depict such shoulder bags worn by the page of the Khatun, the wife of the ruling Khan. Three of these folios will be on display. The exquisite crafting of the Courtauld bag resembles goldsmiths’ work, and it is possible that similar bags were produced in gold and even encrusted with jewels. A bejewelled container of the same shape is held by one of the attendants to the Chinese princess Humayun, as she sits in a garden alongside her beloved Persian prince Humay, in a manuscript of poems by Khwaju Kirmani. Transcribed in Baghdad in 1396, this is one of the most beautifully illustrated manuscripts in the British Library. 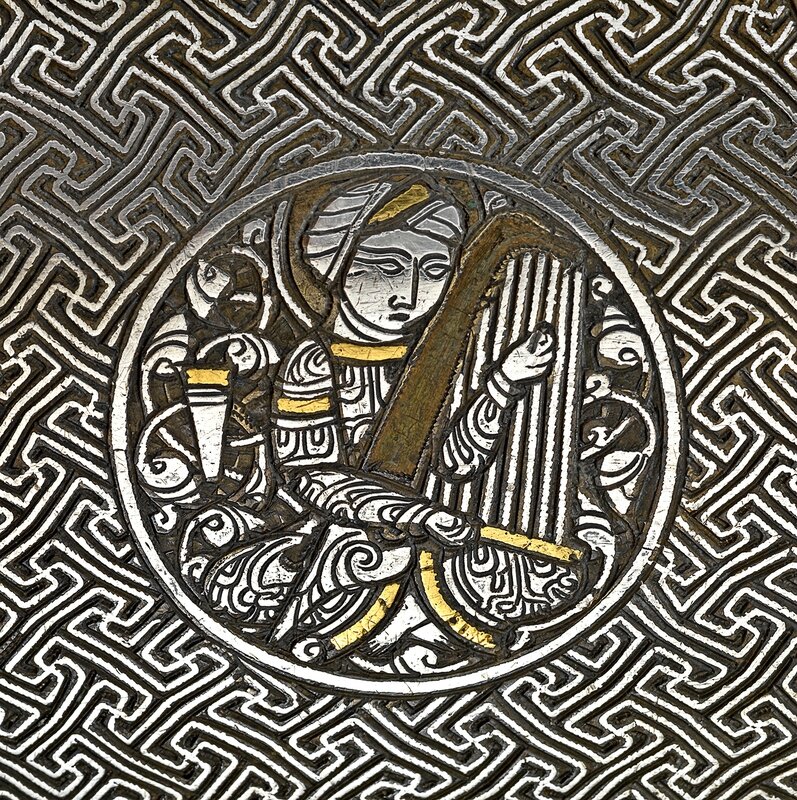 Bag, Mosul, Northern Iraq (detail). Detail of a roundel with a musician. © The Courtauld Gallery, London

THE COURT SCENE
The inlaid decoration of the lid is the bag’s most spectacular feature. Framed by a specially composed rhyming inscription, bestowing praise and good wishes on the owner of the bag, is an Il-Khanid court scene in miniature. Seated at the centre is a richly dressed couple surrounded by a retinue of attendants in Mongol costume and feathered hats who offer them food and drink and carry paraphernalia of a princely life: parasol, falcon, lute. Beside the woman stands her page holding a mirror and wearing, suspended across his chest, her bag. Conviviality was at the heart of Mongol culture and this scene recalls the festivities which took place after a day at the hunt. Images of a noblewoman seated alongside her spouse in court scenes in manuscripts and, as here, on metalwork, reflect the high status of women within Mongol society. The scene follows the rectangular format of illustrations in manuscripts of the period. This extraordinary image must have been designed especially for the bag by someone well acquainted with the customs and costumes of the Il-Khanid court, perhaps a painter of illustrated manuscripts like the small Shahnama on loan from the Chester Beatty Library, Dublin. A highlight of the exhibition will be a life-size display recreating this lavish court scene and featuring objects similar to those depicted: crescent-shaped gold earrings like those worn by the lady, a Chinese mirror similar to the one held by the page, a Syrian glass bottle as depicted on the table. 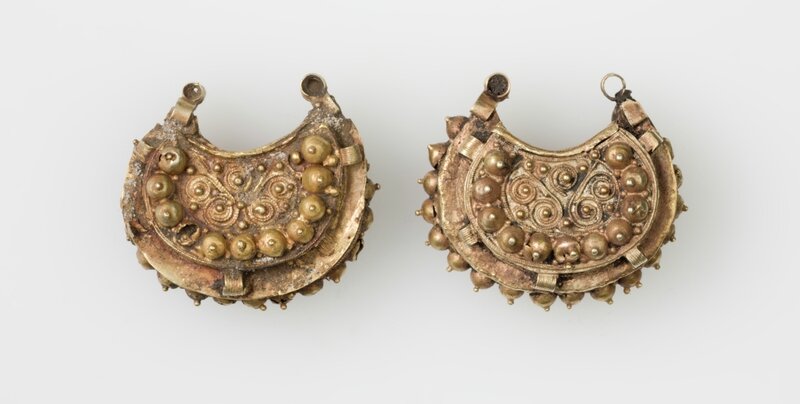 TRADING CULTURES
In the early 13th century, the Mongol leader Chinggis Khan initiated a wave of invasions across Asia. In 1256 his grandson Hülegü established a subsidiary dynasty, the Il-Khanids, to rule the south-western territories of the Mongols. The Il-Khanids continued Mongol expansion into Anatolia and Iraq: in 1258 they captured Baghdad, the seat of the Caliphate, and in 1262, the city of Mosul. The Italian merchant Marco Polo, who travelled from the Mediterranean to China in the late 13th century, left an eloquent description of his journey and some of the Mongol courts and personages he encountered.

The Il-Khanids were enthusiastic patrons of art and architecture and their cosmopolitan court, which was peripatetic in nature, was furnished with luxury objects from around the world: porcelains and lacquer from China, silverwares and silks from Central Asia, enamelled glass from Syria.

Mosul was the great trading city of northern Iraq. It was ethnically and culturally diverse with Arabs, Iranians, Kurds, Turks, Christians, Jews and Muslims, all represented in the city, where various luxuries, including silks and muslins, and inlaid brass, were manufactured.

The encouragement and patronage of art in Mosul under the Il-Khanids will be splendidly illustrated by two sections of a celebrated copy of the Qur’an made for the ruler Öljeitü in 1310, as well as a spherical incense burner created for Öljeitü’s son and successor, Abu Sa'id, on loan from the Museo Nazionale del Bargello, Florence. 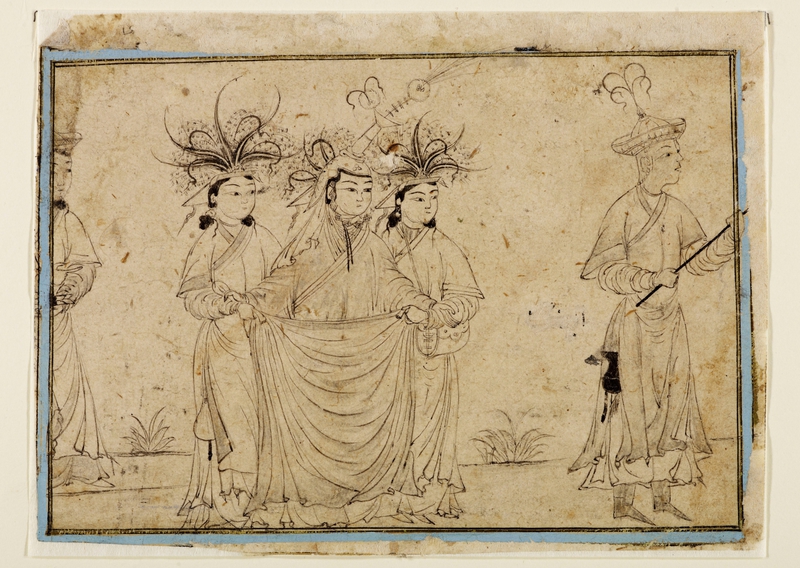 CRAFTING LUXURY: MOSUL AND METALWORK
An important section of the exhibition will examine the inlaid metalwork tradition of Mosul during the 13th and early 14th centuries. The Andalusian traveller Ibn Sa'id, who visited Mosul in 1250, wrote: ‘There are many crafts in the city, especially inlaid brass vessels which are exported to rulers’. The Mongol conquest of the city may have caused temporary mayhem, even for craftsmen, but it also introduced a rich new source of patronage: the Il-Khanid court. The Courtauld bag is richly ornamented with roundels featuring musicians, hunters and revellers, over a geometric fretwork pattern characteristic of the inlaid brass vessels for which the city of Mosul was famous, such as the Blacas Ewer from the British Museum, dated 1232. The bag and other closely related objects in the exhibition, such as a recently conserved penbox from the Walters Art Museum in Baltimore, demonstrate that the technical and stylistic traditions of Mosul metalwork not only survived the Mongol conquest but flourished well into the Il-Khanid period.

Guest-curated by Rachel Ward, formerly of the British Museum, this focused exhibition will provide a fascinating framework for the appreciation and understanding of this magnificent work of art. Commentaires sur 'Court and Craft: A Masterpiece from Northern Iraq' at The Courtauld Gallery, London