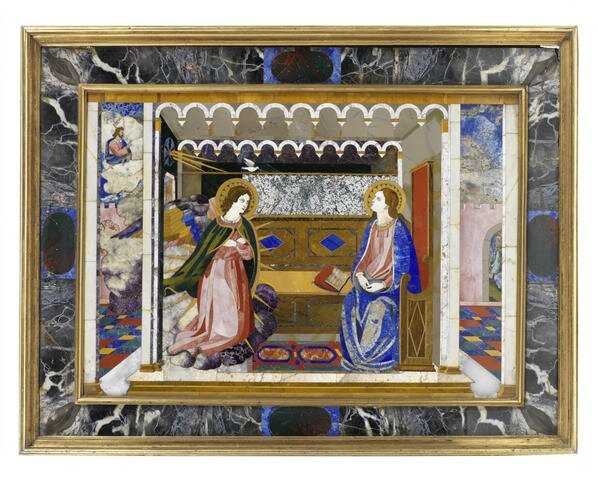 showing the Angel Gabriel and the Virgin seated facing each other, the Virgin on a throne and looking heavenward, the Angel surrounded by rays of light and beneath a dove, rays of light shining through a rose window above the door, an open book by the Virgin's side bearing the words ECCE VIRGO CONCIPIET ET PARIET FILIUM [Behold! A Virgin shall conceive, and bring forth a Son], both beneath an arcaded vaulted ceiling, God the Father shown outside amidst clouds to the left of the scene, in a gilt bronze moulded surround, a further outer border of volterra marble embellished by red marble cabochons at the cardinal points, all in an outer moulded gilt bronze frame, 65cm wide, 50cm high (25.5in wide, 19.5in high). Sold for £98,500 (€118,932)

The panel offered here is a fuller depiction, and a faithful reproduction of the Annunciation fresco, a late 16th century copy of which is in the Hermitage, and shows the same arcaded vaulted ceiling, the same composition, the same cushion beneath the Virgin's bible, and the same patterned floor and walls. (see illustration below of 'The Annunciation', in the State Hermitage Museum, St. Petersburg).

All of these panels appear to derive from the prototype pietra dura and gilt bronze relief of the Annunciation commissioned by Cosimo III as a gift for his daughter Anna Maria Luisa, wife of the Elector of Palatine and designed by the court sculptor, Giovanni Battista Foggini. The workshops produced several pietra dura panels all of this same Annunciation group, based on the painting in Santa Maria Annunziata in Florence which were given as personal gifts from Cosimo III.

Baccio Cappelli was a member of one of those families that worked for generations at the Galleria. A Baccio Cappelli sr. was employed in the Grand Ducal workshops in the time of Cosimo II; an Antonio Cappelli was active under Ferdinand II. Baccio Cappelli was perhaps his son. He signed 'Baccio Cappelli fecit Anno 1709 Fiorenze' on the back of one of the panels that decorate a cabinet made in 1771 after a design by Robert Adam for the Duchess of Manchester, which was in the Castle of Kimbolton, Huntingdon, and now in the Victoria and Albert Museum. An octagonal plaque of the Annunciation is in the Museo dell'Opificio delle Pietre Dure, signed by Baccio Cappelli and dated 1727.