NOTRE DAME, IN.- Featuring works that span four centuries and represent every major European school, an exhibition on loan to the Snite Museum from the Crocker Art Museum in Sacramento, Calif., celebrates the beauty of landscape drawings in all its diversity. The Artist’s View: Landscape Drawings from the Crocker Art Museum comprises 45 of the most important works in this renowned West Coast collection, formed primarily by railroad tycoon E. B. Crocker and his family during their European sojourn from 1869 to 1871. The exhibition will be on view from January 12 through March 16, 2013.

Among the highlights of the exhibition are two of the best surviving drawings by Willem van Bemmel, representing his Dutch and Italian periods. The first shows the artist himself at work recording a farmstead at the edge of a Northern forest, while the second, a view of the Colosseum, shows the transformation that Italian monuments and light worked on his style. This dialogue between Italy and the North is a major theme of the exhibition—French and German as well as Dutch and Flemish artists went to Italy to study the land, as illustrated by Hubert Robert’s Temple of Diana.

This exhibition also identifies recurring themes and motifs. Barbizon artist Camille Corot's scene of woodcutters at the edge of the forest made during the 1800s shows the same humble labor as in Bemmel's farmstead drawn three hundred years earlier. Such continuity amid variety—of artists, their views, and the views they depicted—is part of the appeal of landscape drawing through the centuries. 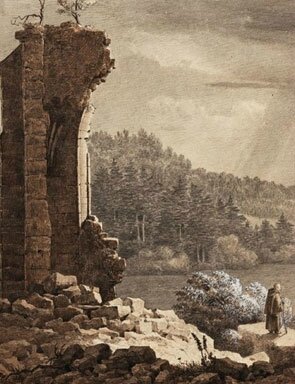