Prado Museum analyses the rise, evolution and decline of the subject of the "Furias"

Prado Museum analyses the rise, evolution and decline of the subject of the "Furias" 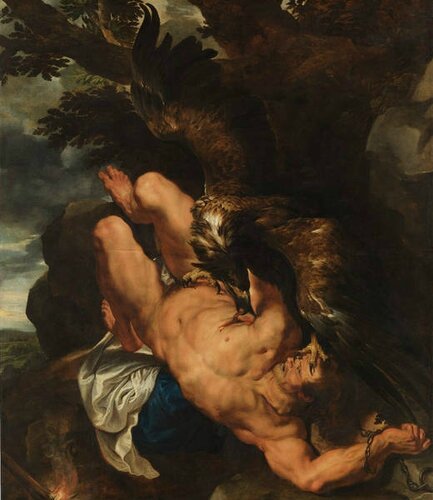 MADRID.- The “Furias”. From Titian to Ribera offers an in-depth analysis of the Renaissance and Baroque’s interpretation of antiquity and looks at the circulation and exchange of artists, works and aesthetic ideas across Europe in the 16th and 17th centuries. In addition, it encourages a reflection on why certain forms acquire meanings that are passed down from one generation to the next. Despite their classical origins, the “Furias” first appeared as a group in art in 1548 when Mary of Hungary commissioned Titian to paint four canvases for her palace at Binche (on the outskirts of Brussels) depicting Tityus, Tantalus, Sisyphus and Ixion, figures whom she associated with the German princes who had rebelled against her brother, the Emperor Charles V, and whom he had defeated the year before at Mühlberg.

In Spain, the name the “Furias” was applied to four figures who dwelled in the Graeco-Roman Hades as a punishment for defying the gods: Tityus, whose liver was constantly pecked at by a vulture for attempting to rape one of Zeus’s lovers; Tantalus, condemned to vainly try to obtain food and drink for serving up his son at a banquet of the gods; Sisyphus, who had to endlessly roll an enormous rock for revealing Zeus’s infidelities; and Ixion, obliged to turn forever on a wheel for attempting to seduce Hera. Strictly speaking, the Furies were female figures who personified punishment and vengeance and were responsible for ensuring that those in Hades underwent their punishments. In Spain, however, and from the 16th century onwards the name was used for Titian’s canvases of Tityus, Ixion, Tantalus and Sisyphus, and the term thus became used for the subject in general.

The “Furias” became a popular iconography in the 120 years after their first appearance, taking on further meanings in addition to their original, political one. From the late 16th century onwards the subject was considered highly appropriate for illustrating supreme mastery in art, given that they are monumental, nude figures in complex foreshortenings and also represent extreme suffering, which appealed to the Baroque sensibility. They were thus used by leading artists such as Rubens, Goltzius and Van Haarlem to demonstrate their skills, and by Ribera and Rombouts to give visual form to the aesthetic of horror in vogue in Europe at the time. However, after a peak of interest in Naples with Ribera and in Venice with Langetti, from around 1680 artists began to make less use of this subject, which was replaced around 1700 by others that allowed similar concepts to be expressed.

Divided into five sections, the exhibition includes 2 drawings, 8 prints, 1 medal and 16 paintings and centres on a copy of the Laocoön from the Museo de Escultura in Valladolid. The first section looks at the only iconographic precedent for the group commissioned from Titian, which is a drawing of Tityus by Michelangelo of 1532, exhibited for the first time in Spain. A view of the Great Hall in the palace at Binche, created to welcome Charles V and Prince Philip, opens the second section, which is devoted to the group commissioned from Titian by Mary of Hungary. The third section looks at Haarlem and Antwerp in the final years of the 16th century and the early 17th century when these cities were the first centres for the reception of the subject of the “Furias”, based on the Laocoön. The fourth section illustrates the subject’s “return” to Italy, the role played by Flemish and Dutch artists in this process and the importance of Naples as the Baroque “capital” of the Furies with Ribera as their maximum exponent. The exhibition ends with the dissemination of the subject across Italy, terminating in Venice with Langetti and the tenebrosi and thus closing a circle initiated by Titian. Before 1548, when Titian began to paint the “Furias”, the only important earlier depiction of Tityus was the drawing that Michelangelo gave to Tommaso de’Cavalieri in 1532. On the reverse, Michelangelo transformed the mythological figure of Tityus into a Risen Christ.

Michelangelo believed that only classical sculpture offered a formal repertoire appropriate for recreating the myths of antiquity and his principal source of inspiration was the Laocoön, which became a key reference for any painter depicting the Furies from this date onwards.

Beatrizet’s engraving resulted in the immediate dissemination of Michelangelo’s composition. Gregorio Martínez produced an original version of it, placing innovative importance on the giant’s suffering face and adding a cloth to cover the figure’s genitals. This is one of the very few Spanish Renaissance mythological paintings. The “Furias” were part of the iconographic programme for the Great Hall in the palace at Binche (in modern-day Belgium), which included other paintings, sculptures and tapestries and conveyed a dual message: firstly, the punishment meted out to those who rebelled against established order; and secondly, the start of a Golden Age after the battle of Mühlberg. Distinctive within the Hall’s decoration was the use of allegory, which was unusual for the Habsburgs but was considered appropriate for conveying the timelessness of the Golden Age.

The “Furias” offered Titian a challenge. Conceptually, this was his first imperial commission that was not a portrait and his first incursion into political allegory. Formally, these were enormous, single-figure compositions which demanded a monumentality and dramatic pathos for which classical sculpture and Michelangelo were obligatory references, particularly after Titian’s period in Rome in 1545-46. 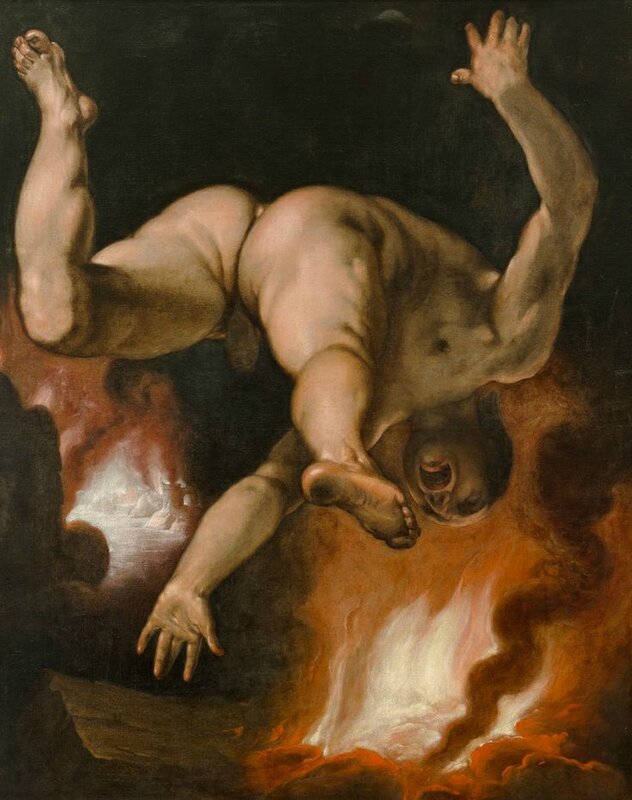 In the late sixteenth century, painters saw the “Furias” as an outstanding vehicle for responding to two artistic concepts previously expressed by Titian: that of varietas (a range of poses and movements), and the depiction of the affetti or states of mind, in this case extreme pain. While Titian’s “Furias” were in Spain by 1558, it was in the Low Countries that they had their earliest impact, both among artists who could have studied them in situ, such as Michael Coxcie and Maarten van Heemskerck, or through prints, some executed by Dutch artists such as Cornelis Cort under Titian’s supervision. This awareness took shape in Haarlem in the 1580s in the context of its Academy, the principal promoters of which were Van Mander, Goltzius and Cornelisz. van Haarlem. The Academy’s aesthetic promoted an exaggerated interpretation of Michelangelo, consisting of hypertrophied bodies and improbable foreshortenings, with an interest in varietas.

The political and religious frontier did not prevent artistic contacts between Haarlem and Antwerp, as evident in the mutual influence between Goltzius and Rubens. The latter returned from Italy in 1608 with an artistic idiom that combined an interest in the antique with Michelangelo’s monumentality and Venetian colour, a synthesis that is admirably expressed in his Prometheus.

IV. Ribera and the aesthetic of horror In the second half of the sixteenth century the idea developed that a work of art could depict an unpleasant subject in an attractive way and that the skilled and effective representation of such scenes counterbalanced their disturbing effect. Caravaggio (1570-1610) was crucial for the “normalisation” of this aesthetic and Rubens became acquainted with it in Italy (1600-08). This fascination with horror reached its peak in Naples between 1630 and 1660 and it is possible to refer to the construction of an “aesthetic of horror” for which the poet Giambattista Marino (1569-1625) was central, championing horror not as a strategy for transmitting a message but as the message itself.

The “Furias” were ideal for this purpose and around 1620 they reappeared in Italy, largely due to Dutch and Flemish painters living in Rome such as David de Haen and Theodore Rombouts. It was, however, Ribera who made the Furies the epitome of horror in painting and Naples the city in which they were most widely promoted. While Ribera only painted Furies until 1635, they were central to the creation of his image as a painter who delighted in violence and horror, thus transferring the subjects of the canvases onto his own personality.

V. From Naples to Venice: the Furies in Italy 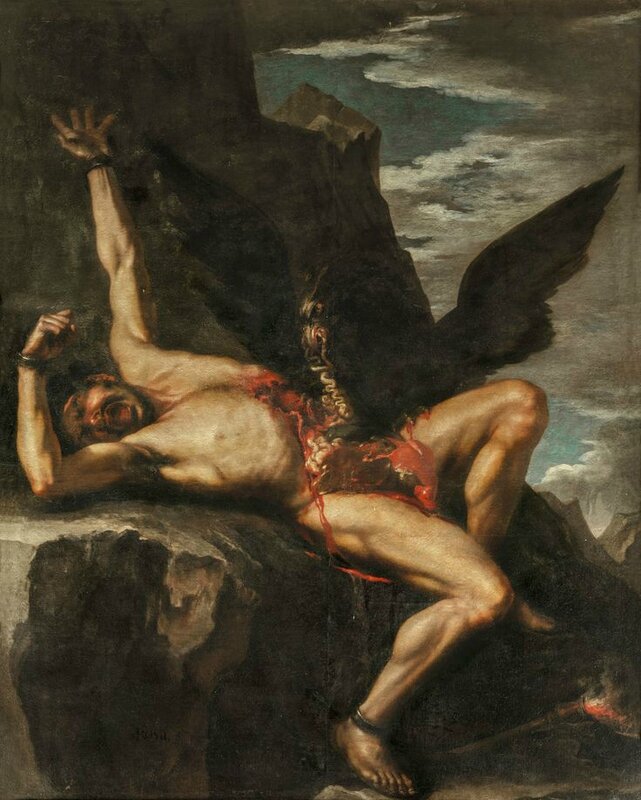 The subject of the “Furias” spread from Naples to the rest of Italy through works by Ribera and the travels of painters close to him such as Salvator Rosa, who introduced himself in Rome in 1639 with a depiction of Tityus. In Genoa, however, the Neapolitan contribution combined with a local interest in this subject evident since the early seventeenth century and associated with the monumental treatment of bodies deployed by painters such as Luciano Borzone (1590-1645) and with patrons such as Giovan Carlo Doria. A friend of the poet Giambattista Marino, a collector of Rubens and the owner of various “Furias”, Doria’s palace housed an Accademia dei nudi. Assereto trained in this environment, confirming his interest in the “Furias” following his visit to Rome the year after Rosa’s triumph with Tityus.

The “Furias” saw their final moment of splendour in Venice, again thanks to the arrival of Neapolitan paintings and of painters such as Luca Giordano, which disseminated both the subject and the associated aesthetic of horror. Its principal exponent was the Genoese painter Langetti, who combined echoes of Assereto with a profound knowledge of Ribera. Arriving in Venice in 1655, Langetti became the principal representative of the tenebrosi: painters who found Caravaggio and Ribera’s tenebrism the best aesthetic option for expressing their own interior dramas. Commentaires sur Prado Museum analyses the rise, evolution and decline of the subject of the "Furias"