LONDON.- On 23 January 2014, Sotheby’s London will present Of Royal and Noble Descent, a sale featuring royal and aristocratic heirlooms from important European dynasties. Spanning centuries of history, these works of art, precious objects and mementoes are not only testament to the bygone splendour of European courts, they also give a fascinating glimpse into the lives and sometimes extravagant tastes of their royal and noble owners.

Discussing the forthcoming sale, Heinrich Graf von Spreti, President Sotheby’s Germany, said: “Having survived through inheritance, these treasures from palaces and historic houses have never been seen by the general public and their appearance at auction offers a unique opportunity for discerning collectors to acquire them.”

Highlights in the sale include:

KING WILHELM I OF WÜRTTEMBERG ORMOLU & CUT‐GLASS SÛRTOUT DE TABLE This spectacular surtoût de table (was probably made on a special request from the Württemberg Court in Germany for one of the three main events in King Wilhelm’s life between 1816 and 1820. On 24 January 1816, Wilhelm celebrated his second marriage to his first cousin, Grand Duchess Catherine Pavlovna of Russia (1788–1819), daughter of Tsar Paul I of Russia. Later that year, on 30 October, he was crowned King Wilhelm I of Wurttemberg and reigned until his death on 25 June 1864. In April 1820, after the death of Catherine, King Wilhelm I married Duchess Pauline Therese of Wurttemberg (1800–1873). The five lots making up the surtoût de table garniture carry a combined estimate of £86,000‐136,500 (€100,500‐159,600). of rectangular form with rounded ends, glazed plates and pierced sides decorated with diamond cut-crystal and ormolu medallions between anthemion flower holders, medallions and frieze finely cast in relief with paterae, the double gryphon feet below a breakfront frieze cast in relief with trophies, one of the sections with a label underneath explaining in hand written French how to handle the sûrtout. Estimate 25,000 — 40,000 GBP

Provenance: King Wilhelm I of Wurttemberg
Thence by descent

Note: The Württemberg Court style was strongly influenced by the ‘goût Empire‘ which under Emperor Napoleon Bonaparte from circa 1800 onwards, became the official state style. The main inventors and major proponents of this style were the neoclassical French architect, interior decorator and designer Charles Percier (1764-1838) in close partnership with his friend Pierre François Léonard Fontaine (1762-1853). As most of the main artists and workshops were based in Paris many things for the Württemberg court were directly ordered there and usually only from the best producers such as Pierre-Philippe Thomire (1751 – 1843). Furthermore the Württemberg Court also employed its own artists who developed and promoted the local version of the Empire style; such as the German architect and painter Nikolaus Friedrich von Thouret (1767-1845), who was court (mainly interior) architect to King Friedrich I von Württemberg and Johannes Klinkerfuss who was court furniture maker to King Wilhelm. As the Württemberg Court of course also needed many special commissions it may be assumed that on various occasions the local artists produced designs which were then probably executed in Paris, as is the case with some of the table decorations in this sale.

The elaborate use of the ormolu and cut crystal medallions can be found – although in a much more restrained fashion – on some Russian, German and French Empire chandeliers but seems to be unique for a sûrtout. This was probably made on special demand from the Württemberg court to match the other ormolu and crystal table decorations and therefore most likely attributable to Johann Klinckerfuss. A set of three Empire ormolu centrepieces circa 1820, by Thomire. Photo Sotheby's

comprising a large centrepiece with three figures and two smaller ones with two figures, each modelled with classically-draped dancing Bacchic maidens holding a staff and supporting a pierced basket decorated with vinery, the circular plinth decorated in relief with putti, garlands and acanthus, each signed Thomire a Paris; 55,5cm. high, 1ft.10in. Estimate 25,000 — 40,000 GBP A pair of Empire ormolu and cut-glass sculptural étagères circa 1816-20, by Thomire. Photo Sotheby's

each modelled with classically-draped music making maidens, on a circular base decorated in relief with bunches of grapes, both signed Thomire a Paris. Estimate 10,000 — 15,000 GBP

PROPERTY OF A EUROPEAN RULING FAMILY

Once in the collection of SAR la Grande‐Duchesse Josephine‐Charlotte de Luxembourg (1927‐2005), this impressive cabinet evokes the celebrated production of the Opificio delle Pietre Dure founded in Florence in 1588 by the Grand Duke Ferdinand I de Medici. 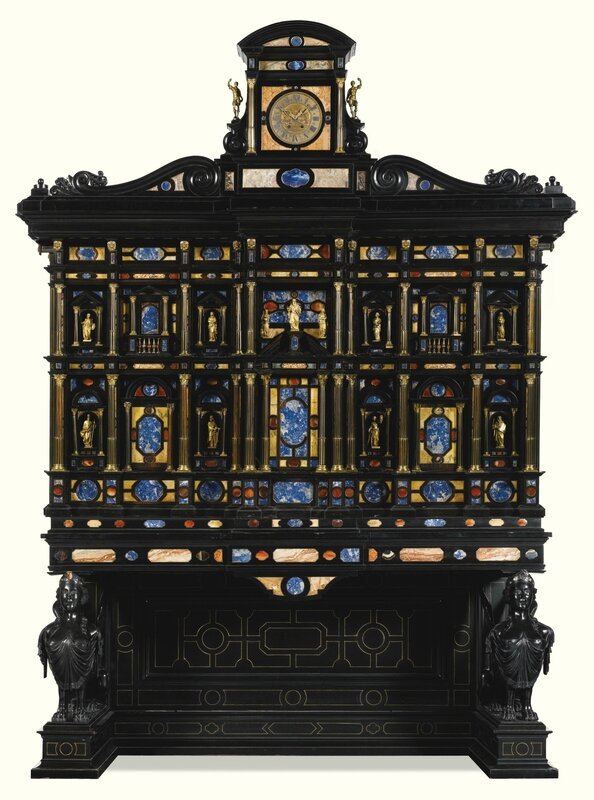 PROPERTY OF A EUROPEAN RULING FAMILY

Note: This cabinet evokes the celebrated production of the Opificio delle Pietre Dure founded in Florence in 1588 by the Grand Duke Ferdinand I de’ Medici. It became renowned for the distinctive use of various hardstones and semi-precious stones such as lapis lazuli, agate, chalcedony, malachite, etc, usually inset in ebony structures, creating stunning contrasts.
17th century cabinets of architectural design and with a dazzling array of pietre dure, existing in the Grand ducal workshops in the 19thcentury, were the inspiration for a number of revival pieces produced both in the Opificio, but also in other Florentine workshops by makers such as Pasquale Leoncini and Andrea Picchi.

The present lot, with its impressive scale and design, fits in the context of that production, being sold in Florence to an increasing flow of wealthy tourists, visiting the recently unified Italy. Nevertheless, pietra dura cabinets maintained their status as great art trophies and kept attracting the grand European families as they did in the 17th and 18th century.

It has been suggested that this fine cabinet was made as an intended gift from the German Emperor Wilhelm II (1859‐1941) to the Turkish Sultan Abdul Hamid II (1842‐1918). From the start of his reign Wilhelm II closely befriended the Sultan and visited him in Istanbul on three occasions in 1889, 1898 and 1917. The presence of the Imperial coat‐ofarms and the rather abundant Oriental style seems to support this theory. the door mounted with fine gilt-bronze and cloisonné enamel plaques with elaborate Islamic style decoration and with a central medallion with the German Imperial coat-of-arms, opening to reveal nine sliding shelves and two drawers, one with springed brass compartments, one drawer containing a gold-wax rod, the sides with carrying handles; 49cm. high, 25.5cm. wide, 17cm. deep.; 19¼in, 10in., 6¾in. Estimate 6,000 — 9,000 GBP

Note: It has been suggested that this fine cabinet was made as an intended gift from the German Emperor Wilhelm II (1859-1941) to the Turkish Sultan Abdul Hamid II (1842-1918). From the start of his reign Wilhelm II closely befriended the Sultan and visited him in Istanbul on three occasions in 1889, 1898 and 1917. The presence of the Imperial coat-of-arms and the rather abundant Oriental style seems to support this theory.

Louis Sussmann-Hellborn (1828-1908) trained as a sculptor at the Berlin Academy of Arts. He travelled to study in France, Belgium, England and lived In Rome from 1852 to 1856. The first major exhibition of his works was organized in Berlin in 1856. His villa at Tiergarten was one of the most representative buildings of the district and made him famous amongst the Berlin intellectuals. He was one of the founders of the Royal Museum of Decorative Arts and was also involved in building a sculpture collection at the Royal Museum in Berlin. From 1882 to 1887, Sussmann-Hellborn was head of the Royal Porcelain Manufactory (KPM) in Berlin. In 1868 together with Louis Ravenné Sussmann, he founded the Bronze- und Emaillewarenfabrik Ravené & Sußmann in the Wallstraße 7 in Berlin; a company which specialised in the production of high quality luxury objects - usually in a more restrained Orientalist style - until their closure around 1890.

PROPERTY OF A DUTCH NOBLEMAN

Due to their high intrinsic value and powerful religious imagery, the mosaics of the Vatican Workshops became the diplomatic gifts of choice of a series of 18th‐century Popes. This practice gives credence to the story that the present mosaic was given to the ancestors of the present owners, Joannes Baptista and Paul Jacob Cloots, powerful merchants active in Amsterdam, Antwerp and Lisbon, who were ennobled by King Philip V of Spain in 1718 and made Barons by Emperor Charles VI in 1725. PROPERTY OF A DUTCH NOBLEMAN

Provenance: by repute, Joannes Baptista and Paul Jacob Cloots, circa 1718-1725;
and thence by family descent to the present owner

Note: In the 18th century the Vatican Workshops produced magisterial mosaics after well-known Baroque paintings by the likes of Guido Reni, Domenichino, Carracci and Poussin. Hardstone tesserae carefully selected for their gradation in colour were cut and arranged in such a way that the chiaroscuro effects of the original paintings was reproduced faithfully. Thusly a durable surface was created that is barely distinguishable from the painting at a distance and that only reveals it is made of the finest available stones upon closer inspection.

The present mosaic is based on a painting of Saint Peter in Prayer by Guido Reni which is currently kept in the State Hermitage Museum in Saint Petersburg. Another rendering of this picture in mosaic was recently presented in Maastricht by Di Castro Antichita from Rome and was accompanied by a note by Alvar Gonzalez-Palacios that convincingly attributes that mosaic to the Vatican Workshops and dates it to the second quarter of the 18th century. Most notable are the comparisons with a mosaic representing Czarina Elizabeth II signed by Alessandro Cocchi in the Hermitage. The finesse with which the tesserae of the present mosaic were cut and placed equally suggests that our mosaic was produced by one of the Vatican's foremost artists.

Due to their high intrinsic value and powerful religious imagery, the mosaics of the Vatican Workshops became the diplomatic gifts of choice of a series of 18th century Popes. Pope Clement XII, for example, presented an Ecce Homo and a Praying Virgin to Maria Amalia of Saxony as she travelled through Rome on her way to her wedding to the King of Naples in 1738, and Pius VI ordered an Allegory of Poetry for Princess Sophia Albertina of Sweden in 1793. This practice gives credence to the story that the present mosaic was given to the ancestors of the present owners, Joannes Baptista and Paul Jacob Cloots, powerful merchants active in Amsterdam, Antwerp and Lisbon, who were ennobled by King Philip V of Spain in 1718 and made Barons by Emperor Charles VI in 1725.

This oil on canvas was commissioned directly from the German landscape painter Johann Christian Vollerdt by the great Dutch diplomat Cornelis Calkoen (1696‐1764). Together with four other lots in the sale, this work was originally part of the famous collection formed by Cornelis Calkoen in the mid‐18th century and has remained in his family ever since. All these paintings were painted in Dresden, where Calkoen was the Dutch ambassador between 1744 and 1761 to the court of Augustus the ‘Strong’, Elector of Saxony and King of Poland. Johann Christian Vollerdt (Leipzig 1708 ‐ 1769 Dresden), A Winter landscape with figures skating on a river, a windmill beyond, 1754. Photo Sotheby's

Provenance: Commissoned directly from the artist by Cornelis Calkoen (1696-1764);
Thence by descent.

The Battle of Leipzig in October 1813 was a decisive blow to Napoleon’s war effort and therefore it is regarded as a turning point in the lead‐up to the emperor’s final defeat at Waterloo in June 1815. The victory resulted in the liberation of Germany on the right bank of the Rhine and is remarkable for the union of all of Napoleon’s opponents on the eve of the battle.

This present miniature monument in ivory and amber consists of three canopies supported by slim columns: the lower tier with Tsar Alexander I of Russia, Emperor Francis I of Austria and King Frederick William III of Prussia holding hands to symbolize their federation, the countenances of the commanders Wellington, Wittgenstein, Schwarzenberg and Blucher are reproduced under the middle canopy, and God’s eye within a corona, symbolising the Holy Alliance, is at the top.

PROPERTY FROM MEMBER OF A SOUTH GERMAN ROYAL FAMILY

A 19th‐century Royal children’s carriage. Est. £5,000‐7,000 (€6,100‐8,500) This exquisite piece was made for Prince Adalbert (1828‐1875), the youngest son of Ludwig I, King of Bavaria and future uncle of Ludwig II, widely‐known as the creator of many romantic castles such as Neuschwanstein and as the most important patron of the composer Richard Wagner. PROPERTY FROM MEMBERS OF A SOUTH GERMAN ROYAL FAMILY