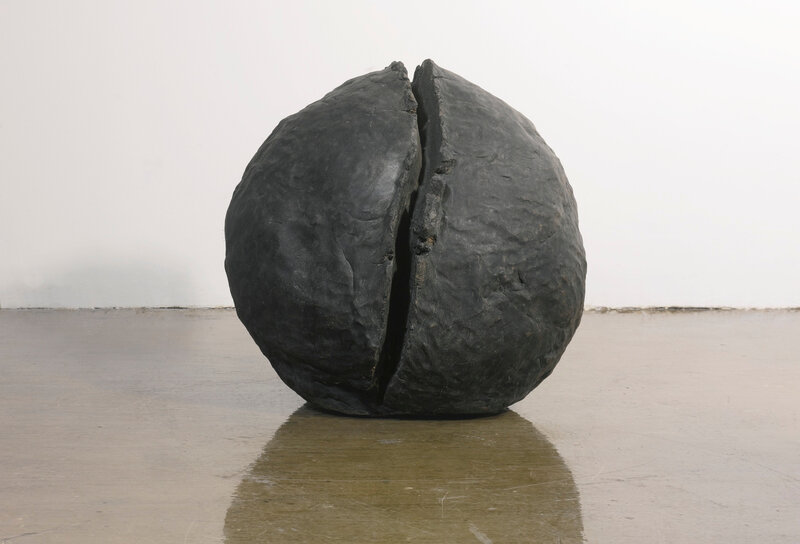 Executed in 1959-60, the present work hails from Lucio Fontana’s celebrated Natura cycle of sculptures. Superbly realised, the rough terracotta sphere is nearly bisected by a dark and dramatic chasm, instantiating Fontana’s iconic slash in sculptural form. Carefully wrought by the artist’s bare hands, its softly uneven surface recalls geological landscapes – or moonscapes – forged and then worn down by eons of thundering, craterous impacts; or the natural inconsistencies of a seed in the ground. Five sculptures from the Natura cycle, three with slashes (as opposed to circular holes), are in the collection of the Hirshhorn Museum and Sculpture Garden, Washington, D.C., each a bronze cast made in 1965 from terracotta works conceived in 1959-60. Primarily a sculptor until his forties, Lucio Fontana's favoured medium was clay, prompting him to clarify in 1939: "I am a sculptor, not a ceramist. I have never thrown a plate on the wheel, nor painted a vase" (Lucio Fontana quoted in: Exhibition Catalogue, London, Ben Brown Fine Arts, Lucio Fontana: Paintings, Sculptures and Drawings, 2005, p. 79).

Describing his inspiration for the Natura cycle, Fontana said: “I was thinking of those worlds, of the moon with these... holes, this terrible silence that causes anguish, and the astronauts in a new world. And so... in the artist's fantasy... these immense things have been there for billions of years... man arrives, in mortal silence, in this anguish, and leaves a vital sign of his arrival... they were these still forms with a sign of wanting to make inert matter live, weren't they?" (Fontana quoted in: Exhibition Catalogue, London, Ben Brown Fine Arts, Lucio Fontana: Paintings, Sculptures and Drawings, 2005, p. 79). The “sign” Fontana mentions is the slash, a mark both primal and revolutionary, which for the artist symbolised man’s agency and self-expression. Like a germinating seed, an alien pod, or a meteor in the farthest reaches of space, the Natura represent unknown potentialities.

In 1957 the U.S.S.R. launched Sputnik, the world’s first artificial satellite, into orbit; in 1959, the Soviets landed probe Luna 2 on the moon. The “space race” permeated political rhetoric internationally, establishing the moon as the next frontier for human exploration. Deeply impacted by Italian Futurism, Lucio Fontana understood how technology could fundamentally redefine the boundaries of human existence. His Manifesto Blanco (1946) had appreciatively stated: “Futurism adopts movement as the only beginning and the only end” (Enrico Crispolti, Lucio Fontana Catalogo Ragionato, Milan 2006, Vol. II, p. 19). For Fontana, Futurism rightly valued the forward progress of civilisation and acknowledged the implications of Einstein’s theories of relativity. Yet whereas Futurism obsessed over sleek industrial design and the sublime amalgamation of man and machine, Fontana perceived a different aspect of progress: the loneliness of vast, unexplored territories, and the return to primordial states of becoming. In 1962, again speaking about the Natura, he said: "They represent the anguish of the man in space. The pain of the astronaut, who is squashed, compressed, with instruments sticking in his skin, is different from ours... The man who flies in space is a new type of titan, with new sensations, especially painful ones" (Lucio Fontana quoted in: ibid., p. 31).

Enrico Crispolti has described the complex of ideas surrounding the Natura cycle as issuing from Fontana’s “cosmic imagination” (Ibid.). Similar themes relating to the birth of the universe and organic matter, and the primal age of celestial bodies, are embodied in Henry Moore’s iconic Moon Head (1964), which also partitions a spherical form by a central cut. The present work equally calls to mind the plaster sculptures of Louise Bourgeois, such as Avenza (1968-9), which articulates budding, abstract, and viscerally biological forms, suggesting the pan-species – perhaps even alien – emergence of life. Henry Moore and Louise Bourgeois each made such themes recurring subjects, yet Fontana best captures the astonishing otherworldliness of nature in a raw, brutish, and primeval state. Encapsulating his potent vision of humanity on the boundaries of the known, Natura is a surpassing example of Fontana’s outstanding sculptural idiom.