LONDON.- On 13 February, Christie’s London evening auction of Post-War & Contemporary Art realised a total of £124,192,000/ $206,158,720/ €151,017,472 selling 83% by lot and 95% by value and achieving the 2nd highest ever total for a European Auction of Post-War & Contemporary Art*. The top price of the evening was paid for Francis Bacon’s Portrait of George Dyer Talking, which sold for £42,194,500/ $70,042,870/ €51,308,512, a record price at auction for a single panel by the artist (illustrated above). This result follows the record-breaking sale of Francis Bacon’s triptych of Lucian Freud which sold for $142 million at Christie’s New York in November 2013. 5 further record prices were set during tonight’s auction including for several generations of British artists such as yBas from the Sensation show Jenny Saville, Gary Hume and 1960’s works by Bridget Riley and Gerald Laing.

Francis Outred, International Director and Head of Post-War & Contemporary Art, Christie’s Europe: ““The astonishing energy and depth of bidding at this evening’s auction follows on from the record auction of Post-War and Contemporary Art in New York last November, and it is fitting that this sale, like that one, was led by a Francis Bacon masterpiece. The strong results were underpinned by the quality of the works and driven by global demand, with both new and established bidders from Europe, America and Asia competing at the sale. This evening we presented an exceptional group of works representing pinnacle moments from every decade of the last 60 years, and as a result we saw significant achievements for many areas of the market for Post-War art, with 6 artists breaking records and rising to new market levels. From the 1960s we saw record prices for Gerald Laing, whose work was included at the When Britain Went Pop exhibition at Christie’s Mayfair last year; Bridget Riley and Domenico Gnoli, whose success follows Tuesday evening’s groundbreaking auction for Post-War Italian Art which set 14 artist records. More recently, the YBA group of artists shown in the RA’s Sensation exhibition was re-established in the international market, with record prices for Gary Hume and Jenny Saville showing that their work continues to resonate. We are also thrilled to have been able to work with Damien Hirst in selling Mickey for such a high price and, most importantly, for such a great cause as Kids Company”.

Camila Batmanghelidjh, Kids Company Founder and Chief Executive: “Some childlike magic happened tonight at Christie’s. Over £900,000 was generated through the sale of Damien Hirst's painting and, in reality, Mickey came to the rescue of some of the most vulnerable children. This money will change lives; from the bottom of my heart thank you, Damien and thank you Christie’s.”

Damien Hirst: "Brilliant and amazing! Sad to see Mickey go but that is a great result, I'm so pleased to be able to help Kids Company".

Francis Bacon’s Portrait of George Dyer Talking, sold for £42,194,500/ $70,042,870/ €51,308,512 (estimate upon request) setting a record price for a single canvas by Francis Bacon at auction and the most expensive work of post-war & contemporary art sold at auction in Europe. Executed in 1966, this is the most significant large-scale portrait of George Dyer to be offered in over a decade. Widely celebrated since it was first shown in Paris in the year of its creation, this painting was also exhibited at the artist’s legendary first museum retrospective at the Grand Palais in Paris in 1971. It was last seen at auction at Christie’s New York in 2000 when it sold for $6.6 million – a record price for the artist at the time.

FURTHER HIGHLIGHTS OF THE SALE:

Gerhard Richter’s Abstraktes Bild (1989) sold for £19,570,500/ $32,487,030/ € 23,797,728 (estimate on request). Arguably the greatest Richter abstract ever to come to auction, this work hails from the finest period in Richter’s abstraction and is a key example of this abstract style that would become synonymous with the artist and that he would return to time and again throughout his career. These works dating from 1988 through 1992 are the product of a long investigation into the possibilities of painting spanning more than five decades and are the purest articulation of the artist’s improvised technique. Jeff Koons’s Cracked Egg (Magenta) (1994-2007) sold for £14,082,500/ $23,376,950/ € 17,124,320 (estimate: £10 million to £15 million). A central sculpture from Jeff Koons’ highly acclaimed Celebration series, this is the most significant work by the artist to be offered in London since 2008, where it realised 12.9 million. The most recent record was set at Christie’s New York in 2013 which saw Balloon Dog (Orange) selling for $58.4 million, setting a new world auction record for a living artist. One of five unique two-part Cracked Egg sculptures made from precision engineered, mirror-polished stainless steel and finished with an exterior translucent coating of magenta (the others are red, violet, blue and yellow), Cracked Egg represents a feat of technical virtuosity resulting in the impossibly thin, delicate appearance of the shell. Damien Hirst’s Mickey sold for £902,500/ $1,498,150/ € 1,097,440 (estimate: £300,000-500,000). Hirst was invited by Disney to create a work of art that combines the fun and energy of Mickey Mouse with Hirst’s own trademark style. The result is the ultimate spot painting, taking inspiration from Mickey’s round shapes. Hirst is donating all proceeds of the sale to Kids Company, the charity founded in 1996 by Camila Batmanghelidjh which provides practical, emotional and educational support to vulnerable inner-city children and young people in London and Bristol. Domenico Gnoli’s Black Hair (1969) sold for £7,026,500 / $11,663,990 / €8,544,224 (estimate: £1.2 million – 1.8 million). Only months before his tragically early death at the age of 37, Domenico Gnoli’s Black Hair was created at the pinnacle of his career (estimate: £1.2 million to £1.8 million, illustrated right) and was formerly in the collection of the celebrated art collector and patron Harry Torczyner. In 1969, Gnoli created twenty-one paintings and many of these, including Black Hair, rank among his greatest and most-recognised works, with a number of them now in international museum collections. 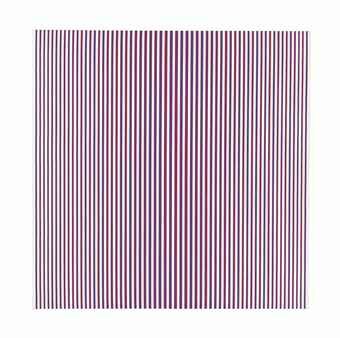 Bridget Riley’s Chant 2 sold for £2,882,500/ $4,784,950/ €3,505,120 (estimate: £2.5 million-3.5 million) setting a record price for the artist at auction. Debuted at the 34th Venice Biennale of 1968, Chant 2 is one of only three paintings which announced Bridget Riley’s celebrated foray into colour, for which she was awarded the prestigious International Painting prize, making her the first woman and first Briton to win this important accolade. Situated alongside to other ground-breaking colour work Late Morning, now housed in the permanent collection of Tate, London, and Cataract 3, in the British Council Collection, Chant 2 is among the first works that mark the artist’s departure from the binary confines of monochromatic black and white. *The highest total for an auction of Post-War and Contemporary Art in Europe was established in June 2012 at Christie’s London (£132.8 million / $207.3 million).