Hamburger Kunsthalle opens exhibition on beauty, eroticism and the adoration of models

Hamburger Kunsthalle opens exhibition on beauty, eroticism and the adoration of models HAMBURG.- With the exhibition Feuerbach’s Muses – Lagerfeld’s Models the Hamburger Kunsthalle is presenting an unusual double exhibition on beauty, eroticism and the adoration of muses and models that brings together paintings by Anselm Feuerbach and hitherto unseen photographs by Karl Lagerfeld. In a similar way both Feuerbach and Lagerfeld seek an actualisation of an ideal of timeless beauty founded in the ancient world. The exhibition examines the cult of beauty, which stylises the model to an icon. Over forty works by Feuerbach, most of them from the years 1860–70, will be on show. They are loans from the Feuerbachhaus Speyer and from numerous German, Swiss and Austrian museums and private collections. Karl Lagerfeld has created a series of around sixty black-and-white photographs especially for the exhibition. Mostly in large formats, they have been printed in a complex process onto silver- and goldcoloured fabric.

Anselm Feuerbach (1829–80) one of the most important German painters of the late nineteenth century, lived in Rome from 1856 onwards. The city, with its magnificent architecture and heroic surrounding landscape, was a place of yearning that seemed eligible like no other to revive the classical ideal of ancient times. Feuerbach devoted himself to antique subject matter, which he filled with imagination and personal feeling. This is most excitingly shown in the series of unique portraits, begun in 1860, which portray Feuerbach’s model and muse, Anna Risi, known as Nanna. Feuerbach painted Nana in a wide variety of roles and sensitively staged settings that reveal an almost cultic veneration for his model. When Nanna left Feuerbach in 1865, she was followed by Lucia Brunacci. Similarly to Nanna she matched the classical ideal of beauty of the time, with her Greek profile and thick dark hair. Lucia inspired Feuerbach to impressive portrayals of mythological themes that form the highpoint of his ouevre.

The photographic series Modern Mythology (2013) by Karl Lagerfeld, explores the love story of Daphnis and Chloe, and shows models such as Baptiste Giabiconi and Bianca Balti, who have accompanied Lagerfeld in his work for several years. The story, by the poet Longus, tells of a boy and a girl who grow up without parents among shepherds and over the years develop a strong affection for one another. The narration has been taken up many times since the Renaissance. Lagerfelds photographs belong to a series of works by François Boucher, Pierre Bonnard or Aristide Maillol, which present the ancient text as a symbol of the idyllic life. Karl Lagerfeld’s stagings were shot against the picturesque natural background of the South of France, and are the actualisation of an ancient theme. 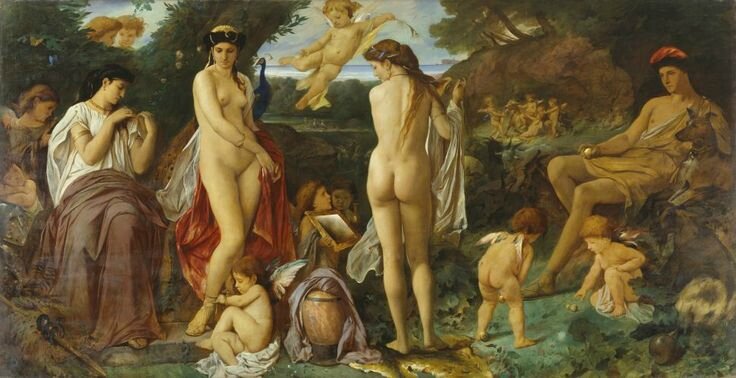 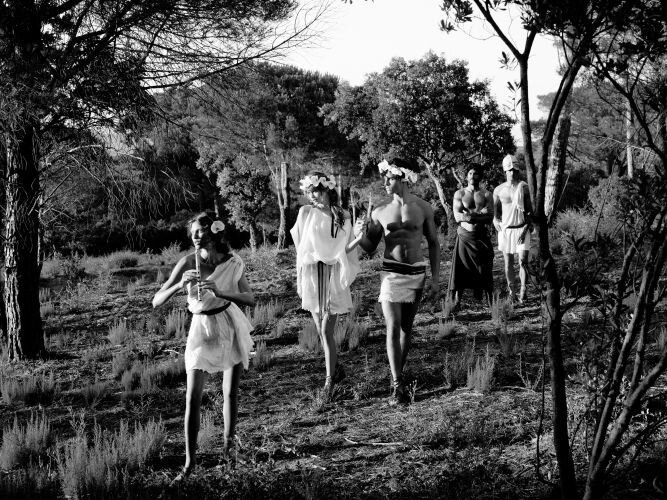