BEVERLY HILLS, Calif. – Last year I.M. Chait took a different approach in planning their Asia Week sale. Rather than conducting their popular annual auction in New York amid the frenetic activity of Asia Week, they opted to hold the sale in the comfortable, low-key environs of their Beverly Hills gallery. That way, reasoned company founder Isadore M. Chait, visitors traveling from Asia to New York could stop over in Los Angeles and get a relaxed head start on their buying. Chait’s experimental 2013 California-based sale was a smashing success, taking in $3.4 million. This year, their Asia Week auction will be held at the firm’s Beverly Hills gallery on March 23rd, the Sunday immediately following Asia Week New York.

“We’re confident that Asia Week buyers will say the best was saved for the last stop on their itineraries before returning home this year,” said I.M. Chait Director of Operations Joshua Chait. “The selection we’ve prepared reflects our clients’ broadening tastes and interest in exploring new areas of art. In addition to the ongoing demand for classic Chinese porcelains and antiques, which hold a place of reverence with collectors, we’ve noticed that Asian art buyers are becoming more interested in bronzes, calligraphy, carved jades, fine jewelry and gems; embroidered silks, and Japanese prints and screens. We kept those trends in mind in curating the collections and pieces chosen for March 23rd.”

Several noted collections lead the auction lineup, including the exceptional Chinese snuff bottle collection of real estate developer F. Trammell Crow (1914-2009), which opens the sale. Nearly 100 bottles are cataloged, including examples carved from agate, glass, chalcedony, quartz crystal, jadeite and jade; and other precious and semi-precious materials. Lot 26 a rare and exquisitely detailed lac burguate snuff bottle is in the form of a lady in a mother-of-pearl inlaid dress, playing a “stringed” instrument. Estimate $1,500-$2,000.  Lot 95 another figural bottle depicting an empress holding a fan and a musical instrument, doubles as a brooch/pendant, and is estimated at $1,200-$1,500. 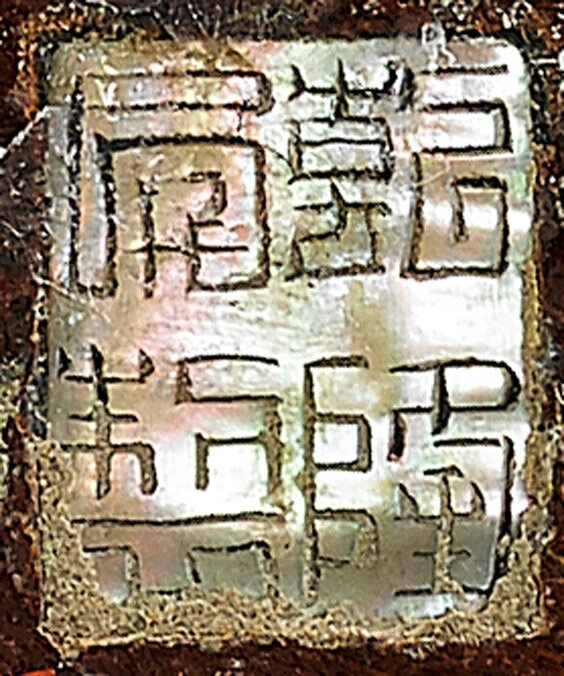 Extremely rare and finely detailed, lac burgaute figural snuff bottle; in the form of a lady playing an instrument: her red lacquer dress with inlaid mother-of-pearl patterning; her hands and head of ivory; the head acting as a stopper; seal mark on inlaid mother-of-pearl reserve; H: 4 1/2". Estimate $1,500-$2,000 Fine Chinese ceramics from two collections include treasures of the Han, Tang, Yuan and Ming Dynasties, plus Transitional and numerous Qing pieces. Lot 199 a large (15½ inches) and important, a 14th-century Yuan Dynasty blue and white porcelain jar exhibits ovoid form with unusually molded dragon-fish handles. The body is decorated with narrative scenes depicting Xiao He on horseback pursuing Han Xin by moonlight. Exceptional in every way, it is estimated at $150,000-$250,000. Highly important and large, Chinese 14th Century Yuan Dynasty, blue and white porcelain jar: of tall, somewhat amphora-style ovoid form, with two unusually moulded dragon-fish handles; the body with narrative scenes, depicting Xiao He on horseback pursuing Han Xin by moonlight; all beneath a band with phoenix, and with lappets around the base; H: 15 1/2". Estimate $150,000-250,000

Leading the bronzes is Lot 200, a superb 15th-century early Ming Dynasty Xuande gilt-bronze Bodhisattva in a graceful seated pose. The 9 7/8-inch figure is elaborately decorated with cast “jewelry,” headdress and other adornments, and is expected to make $250,000-$350,000 at auction. Superb 15th Century Chinese, early Ming Dynasty gilt bronze figure of a seated Bodhisattva: with hands in mudra, dressed in elaborately cast "jewelry" and headdress; with a lotus blossom at each shoulder, all atop a lotus base; Xuande Mark and of the Period; H: 9 7/8". Estimate $250,000-350,000

A selection of rare, scholarly Chinese calligraphy scrolls comes to auction with provenance from the Songwon Collection and the Young-Ig Min and Pyong-U Min family. Among the offerings is Lot 455 a pair of finely detailed ink and color on silk scroll paintings, each with a depiction of a Lohan – or one who has followed the Eightfold Path and achieved deliverance of earthly existence. Each of the signed and sealed scrolls measures 94½ by 27 inches, and together they are expected to achieve $12,000-$15,000. Lot 485 a Chinese ink and color on silk landscape painting by Pu Ru is inscribed and signed, with two artist’s seals and an additional collector’s Chongsog (Pyong-U Min) seal. The 22½-inch-long artwork is estimated at $10,000-$20,000. An exercise in perfection, Lot 301 a 16-piece carved ruby matrix tea set with gilt mountings and accents includes a covered teapot with carved dragon inside, a chocolate/water pot, creamer, four claw-foot shallow dishes, four dragon-form tea cups, serving accessories and a carved dragon centerpiece. A thick ruby zoisite freeform slab serves as the tray. A sensational work of art, the set is entered with a $160,000-$180,000 estimate. oil on wood panel painting; of a seascape depicting a ship in the distance beneath a softly diffused sun amid clouds, with a strong crashing wave gleaming a brilliant blue-green in the foreground; signed in cyrillic and dated 1849 lower right; 10 3/4" x 15 1/2"; in carved and gilt wood frame. Estimate $70,000-90,000

Provenance by reputed family history: purchased from Sotheby's in the 1970s

Magnificent jewelry may be found in many forms in the March 23rd auction. Lot 358 A pair of chic, square-cut ruby-with-diamond cluster earrings in the style of Van Cleef & Arpels replicate flowers with distinctly formed petals. The earrings have a total ruby weight of (approx.) 40 carats and are mounted in 18K yellow gold. Estimate: $12,000-$15,000. Among the other treasures in this category are Imperial jadeite pieces, diamonds and other gems; watches and clocks; fine pens, Tiffany and Chinese export silver; and Faberge-style objects. 18K yellow gold mounted, ruby and diamond cluster earrings in the style of Van Cleef & Arpels; each comprised of six petals covered in invisibly-set, square-cut rubies, together totaling approx. 40 Cts.; each centering a triangular cluster of round white diamonds; each with hinged, convertible clip and post backs; D: 1 1/8" (each approx.). Estimate $12,000-15,000

Superior-quality prints and screens from an estate local to Beverly Hills include pieces by Toko Shinoda, Kyoshi Saito, Haku and other prestigious artists. Pre-Columbian and South Pacific primitive art from two California collections will also be offered.