NEW YORK, NY.- When the 47 galleries participating in Asia Week New York open their doors from March 14 to March 22, they will be extending a welcoming hand to the next generation of collectors. On view will be an affordable range of Asian works of art priced to fit a novice collector’s budget. Given newspaper headlines about skyrocketing prices in the Chinese art market, budding collectors might conclude that Asian art is simply beyond their reach. To that, Asia Week experts respond with: Think again! Asia Week New York has many choice pieces in all Asian categories priced under $5,000.

Says Carol Conover, chairman of Asia Week New York and director of Kaikodo LLC: “For new collectors there is still room to buy both ancient and contemporary art from Japan, India, Southeast Asia, Korean and yes, even China. The Asia Week New York dealers are always happy to see new collectors coming through the door, and for many of the foreign dealers, the young collector is one of the reasons they participate.” Ms. Conover cites the work of Mansheng Wang’s Deep Autumn, 2013, priced at $1,500. “With his recent show at the China Institute and excellent reviews, the very accessibly priced works of this acclaimed artist probably won’t last past this season!” she predicts. Asian art expert Lark Mason says: “Although many areas of Chinese art are reaching record prices, other areas present remarkable opportunities, such as Chinese tomb pottery and other burial items, particularly with a provenance; Chinese softwood furniture, Chinese export works of art from ceramics and silver to furniture; early Thai ceramics and works of art; and many types of Japanese art, particularly objects made during the Meiji period for export to the West.”

Tina Zonars, Senior International Director, Chinese Ceramics and Works of Art, Christie’s, points to Song ceramics (960-1279 A.D.) as an undervalued area. “While major pieces of Jun, Guan, Ge and Ding might command high prices, it is still possible to get a lovely piece of Qingbai, Yaozhou or even Longquan celadon in good condition at a fairly reasonable price,” she says. “Highly prized by connoisseurs and historians, these ceramics are beautiful, easy to take care of, and easy to live with in both a contemporary and traditional setting.”

James Lally, of the New York-based gallery J.J. Lally & Co., sells at the top end of the market, but offers two suggestions for new collectors including a painted gray pottery torso of a horse from the Han Dynasty, 206 B.C.-A.D. 220, for $2,000 and a Sichuan burnished dark gray pottery Amphora, 3rd/2nd century B.C., priced at $3,000. “It is still possible to acquire a good antique Chinese work of art today without spending more than $5,000,” says Mr. Lally. “The best opportunities are in areas such as Neolithic pottery or Han dynasty burial items which are currently out of fashion with most Chinese mainland collectors. A diligent and persistent collector who takes time to understand an esoteric subject such as ancient bronze seals or Neolithic pottery will find good examples still can be acquired at very reasonable prices.” “Snuff bottles are a great place to start collecting Chinese art because they are a microcosm,” says Erick Scheiss of Jadestone Gallery in Portland, Oregon. “They are miniature versions of the larger works that we admire in museums and in galleries, but are often either too large or expensive for us to own or display properly, particularly in a New York City apartment. By collecting snuff bottles, one can enjoy all of the various materials and genres of Chinese art in miniature. While the rarest and most valuable snuff bottles now sell in the hundreds of thousands to millions of dollars, many can be acquired from the top dealers for a few thousand.” Mr. Scheiss suggests a white Jade snuff bottle, priced at $1,800, a fraction of what a larger jade carving or larger snuff bottle would cost of this quality. In the contemporary field, Martha Sutherland of her namesake gallery, comments: “Calligraphy is a good area to collect as traditionally prices for calligraphy have not been as high as for painting. We also have a variety of smaller format ink landscapes done by numerous artists whose larger pieces sell for nearly 10 times that price. Our Hai Tao show for Asia Week New York features a number of album leaf paintings including a Hsia I-fu painting and another one by Hai Tao, each priced at $5000.” Karen Wender of China 2000 Fine Art recommends two artists: An Ho, 87 years old, who has had over the years numerous one-person exhibitions at private galleries and in museums, and during this Asia Week New York will have her first two paintings up for sale at Christie's New York. Another artist, Xu Xi, who is 74 years old, has shown his work extensively around the world, and there are many publications of his art in English and Chinese. The prices for his work are rising, and the fan painting represents an extremely reasonable price point for a young collector who would like to own his work. The Japanese contemporary field offers new collectors a variety of objects from which to choose.

“One doesn’t need an art history degree to appreciate contemporary Japanese ceramics,” says Joan Mirviss of Joan B. Mirviss Ltd. in New York. “The work requires no historical or philosophical context, rather it is the perfect blending of superb technical skill and artistic intelligence.” With its tactile and visual magnetism, the work begs to be touched and appreciated. And coupled with affordability and ability to withstand long-term display, the appeal has become universal with major works entering the permanent collections of museums throughout the United States, Europe, Australia, Canada and Asia. Ms. Mirviss suggests exploring the work of Nakaigawa Yuki, a prominent woman clay artist whose biomorphic black gray or white sculptures are all evocative of forms in nature and are remarkably undervalued. 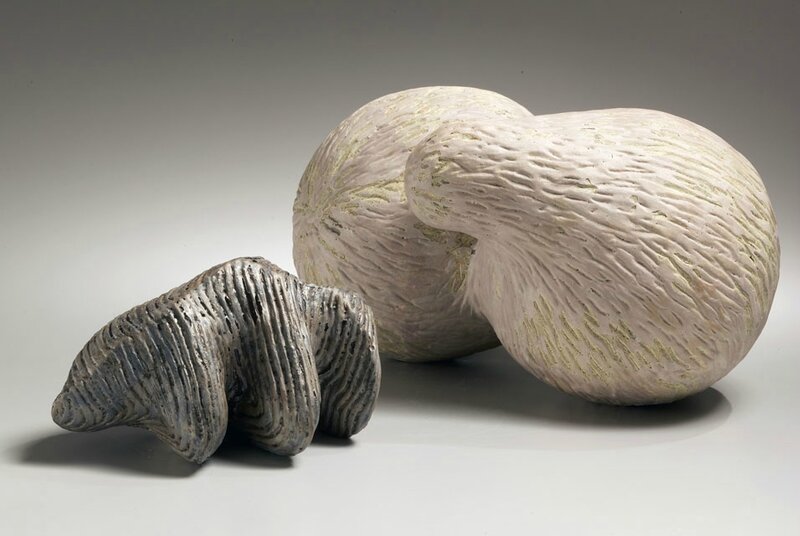 Byron Kehoe from the Lesley Kehoe Galleries in Melbourne, Australia says that Japanese contemporary art offers wonderful opportunities for new and young collectors. “We are featuring a number of emerging artists in metalwork during Asia Week. Japanese metalwork is unique and features a number of extraordinary techniques that have evolved from time-honored traditions and are now reinterpreted by contemporary artists. He points to Kaneko Toru as an artist to keep an eye on. Toru’s work is represented in several museums, including The Victoria and Albert Museum in London, The Aberdeen Art Gallery and Museums in Scotland and The Ulster Museum in Ireland. His work was selected for Turning Point: Oribe and The Arts of Sixteenth-Century Japan held at The Metropolitan Museum of Art in 2003. White Objét #1 (Checkered), a tin-plated copper vessel is priced at $2,800.

At Dai Ichi Arts, Beatrice Chang recommends the work of Yuriko Mastudase items from her affordable selection. “This colorful hand-made teapot ($3,500). They both comes with artist-signed wooden boxes, which are also another focus of collectors (seasoned and new) of Japanese ceramics, almost as much as an artwork’s authenticity and minimal aesthetics,” she says. “The works by thisese artist s hasve been featured in solo and group exhibitions internationally and locally.” “Having our permanent gallery space on 26th Street in Chelsea, the contemporary art capital of the world, is one of our strengths,” says Nana Onishi of Onishi Gallery. “Since I am one of the few native Japanese gallerists in New York City, I feel that I have a mission to help art lovers become more interested in Japanese art, especially those young or novice collectors who have a passion for Asian art but need guidance.” For those interested in more traditional Japanese works of art, Asia Week New York has a number of galleries from which to choose: “Japanese antiques possess many fields that are really good for collecting,” says Milan-based Giuseppe Piva. “Netsuke, prints and tsuba are fields where you can build a very good collection starting with pieces that cost few thousand dollars each.” Mr. Piva suggests this signed ink painting by Shogetsu priced at $4,000, as well as others by artists such as Tani Buncho, Okuhara Seiko, and Otagaki Rengetsu.

“Japanese paintings are truly an undervalued market with exceptional works by long admired and collected artists fetching well below $10,000,” says Gabriel Eckenstein of BachmannEckenstein, Basel, Switzerland. “We are speaking about a field where you can find very well-known artists who are represented in many collections both inside and outside Japan. There have been numerous exhibitions on them, and they have been well published, and yes, they are highly affordable. Collectors outside Japan truly just need to be educated that a hanging scroll can fit as well into their living space as comfortably as one inside a frame,” he says.

New York’s Carole Davenport suggests a tokkuri, or sake bottle, called Tangen Satsuma, priced at $3,900. It was produced in the middle Edo period in Kyushu, Japan, at the Satsuma kilns. It is labeled Tangen due to the fact that the underglaze blue landscape scene, which decorates all sides, is attributed to the hand of the Kano Painter Kano Tangen, 1679-1767. A very similar bottle is illustrated in the well-known book on Japanese pottery by Soame Jenyns. “The surge in the prices of Chinese art has not yet reached the art of still-developing Asian countries,” says Jonathan Tucker of Jonathan Tucker/Antonia Tozer in London. “There are very few domestic collectors in countries like Myanmar and Laos, and there is therefore less upward pressure on prices. As these countries develop economically I anticipate that pieces like this Burmese gilt and red lacquer wood seated Buddha ($3,900) will become scarcer and more expensive to acquire.” Karsten Tietz of Buddhist Art, from Berlin, concurs with Mr. Tucker and advises his clients that they can get much better value for money in Southeast Asian art, especially from the regions of Thailand, Laos and Myanmar. “One can find a good quality 14th- or 15th-century Thai bronze for 10 to 20 percent of a comparable Tibetan bronze,” Mr. Tietz advises. San Francisco-based Xanadu will have Chinese snuff bottles, Japanese netsuke and various pieces of ancient jewelry at affordable prices. Marsha Vargas recommends a pair of 12th-century Vietnamese Cham gold earrings. Says Marsha Vargas, “Asia Week New York presents a unique opportunity to view numerous galleries and exhibitions where a new collector can handle and study a wide range of items being offered by knowledgeable dealers. The best advice I can offer is to look at as many pieces as possible so that you educate yourself about the items, and then purchase the best quality that you can afford within your area of interest.” “Always buy the best you can afford,” advises jewelry specialist Sue Ollemans from London,” who will offer many beautiful pieces under $5,000. “One should never compromise or be put off by a small budget.” Miss Ollemans suggests a 19th century Navartana pendant and ring from Northern India, and a 19th century silver gilt bangle from the Buginese people in Sulawesi.

New York’s Moke Mokotoff recommends an antique Naga glass-bead necklace priced at $1,500. Nagaland is a restricted area of northeast India inhabited by ferocious tribes, the only territory in India the British were unable to control despite their military might. Antique beads such as these are completely unavailable at the source and are very undervalued in the West. This necklace is from an American estate and was originally collected in the 1970s. 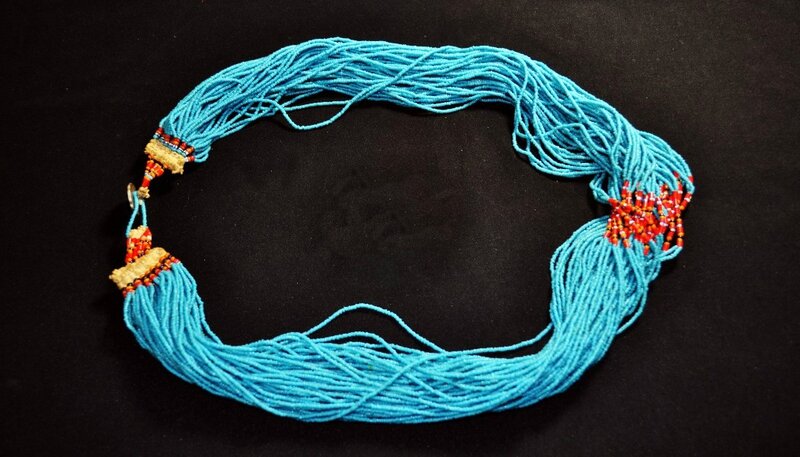 Nancy Wiener, from New York, also thinks that jewelry is a way to enter the market without breaking the bank. She cites a 19th-century silver rondel in the form of a kala from Indonesia, Bali or East Java, priced at $5,000. 19th century silver rondel in the form of a kala from Indonesia, Bali or East Java, $5,000. Photo: Courtesy of Nancy Wiener Gallery Equipped with the advice that the Asia Week New York experts have provided, any new collector can enter the fair confidently informed about where opportunities lie. And the best advice to remember is: it’s never too early to start a collection—and there’s no better place to start than with Asia Week New York!