LONDON.- The Christie’s sale of Antiquities in London on 2 April 2014 comprises 199 carefully selected lots with exceptional provenance which span the ancient world from the 3rd Millennium B.C. to the 11th Century A.D. Leading the sale is a rare statue of the young Hercules, formerly in the Roger Peyrefitte (1907-2000) Collection in Paris (estimate: £100,000-150,000, illustrated above). Peyrefitte was a French diplomat and noted novelist, whose collection, including this piece, was published in 1972. Further highlights include a pair of Egyptian alabaster canopic jars for Tau-Iert-Iru (estimate: £50,000 - 70,000) and a Roman marble Fortuna, previously in the collection at Harewood House (estimate: £25,000 - 35,000). With estimates ranging from £1,000 to £150,000 the sale is expected to realise in excess of £2 million.

Labour, and leaning on the iconic olive-wood club (now missing) (estimate: £100,000-150,000). The Romans followed the Greek taste for artistic renderings of infants, and representations of Hercules as a baby abound yet there are few depictions of the hero as a cherubically plump child evident in the present work. It is known from parallel examples that Hercules would have been holding the golden apples of the Hesperides in his outstretched left hand, which he was ordered to steal as his Eleventh Labour. This seemingly illogical marrying of a tender depiction of youth with the spoils of heroic deeds is highly unusual, attested to in only a couple of other statues, including one in green basalt in the Capitoline Museums. Depicted as a chubby child, standing with the weight on his right leg, the left leg advanced, leaning on his club, now missing, wearing the Nemean lion skin pulled up over his head, its gaping jaw with fangs, the tufted mane delineated over the back of his head, and falling in deep V-shaped folds down his back, his wavy hair falling onto the forehead, his face with almond-shaped eyes, apple cheeks and rounded chin, the lips parted, holding a quiver in his left arm, remains of right hand at right hip and part of bow slung on left arm; 31 ½ in. (80 cm.) high. Estimate: £100,000-150,000.

Notes: This charming statue depicts the hero as a cherubically plump child. The Romans followed the Greek taste for artistic renderings of infants, and representations of Hercules as a baby abound. In these examples he is most often shown wrestling the two snakes which were sent to kill him when he was only eight months old. Interestingly, this Hercules has the attributes more usually associated with the son of Zeus in his later years: the Nemean lion-skin, worn around his shoulders, which was won in his First Labour, and the iconic olive-wood club, which he leans on (now missing). In addition, we know from parallels that he would have been holding the golden apples of the Hesperides in his outstretched left hand, which he was ordered to steal as his Eleventh Labour (see S. Reinach, ‘Herakles Enfant, Palais des Conservateurs’, Repertoire de la Statuaire Grecque et Romaine, vol. II.I, p. 230). This seemingly illogical marrying of a tender depiction of youth with the spoils of heroic deeds is highly unusual, attested to in only a couple of other statues, including one in green basalt in the Capitoline Museums (Inv.Scu 1016; see also the Barbier-Mueller Museum, inv. 204-11). Such figures allude to the hero’s burgeoning physical prowess, and provide a playful nod to the exploits to come.

Canopic jars were used in ancient Egypt during the mummification process to store the internal organs of the deceased. The sale features a pair of Egyptian alabaster canopic jars which were made for a woman called Tau-Iert-Iru (estimate: £50,000-70,000). Of these two jars, one invokes the protection of the god Hapy, one of the four sons of Horus, associated with and the protector of the lungs. The other invokes the goddess Neith, who offers protection to the god Duamutef, associated with and protector of the stomach. A third jar would have been inscribed with an invocation by Isis to the god Imsety, associated with the liver, and a fourth jar would have had an invocation by Selqet, to Qebehsenuef, associated with the intestines. 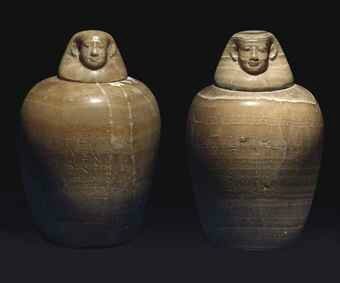 Each large rounded jar with four line hieroglyphic inscription for the lady Tau-iret-iru, one jar invoking the goddess Nephthys, who offers protection to the god Hapy, the other invoking the goddess Neith, who offers protection to the god Duamutef, each with human headed lid. Each 17.1/4 in. (44 cm.) high. Estimate: £50,000 - 70,000.

Provenance: Acquired by a French diplomat in Alexandria in the 1840s; thence by descent to the present owner.

Further highlights include a Roman marble Fortuna (estimate: £25,000-35,000). Roman goddess of chance and luck, she is shown with several of her characteristic attributes, including the cornucopia, which she holds, as the giver of abundance, a rudder, which signifies her role as controller of destinies, a ball, which indicates the uncertainty of fate, and a wheel, depicting the circle of life and fortune, all depicted on the side of her throne This marble which dates to circa 1st – 2nd century A.D, was previously in the Harewood House collection, probably acquired by Henry Lascelles, the 6th Earl of Harewood, who married Princess Mary, daughter of George V in 1922. The goddess Fortuna had many cults in Rome, and her image was used by emperors, including Augustus, for the promotion of their leadership. 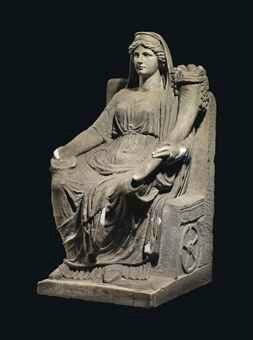 Depicted seated on a high back throne with tasselled cushion, her left knee tilting outwards, holding a laden cornucopia in the crook of her left arm, the shaft decorated with scrolling tendrils, a patera in her right hand, resting on her thigh, wearing a belted chiton with buttons along the right sleeve which is falling off her right shoulder, a himation draped around her waist and lower body, wearing a veil and crescentic diadem, the throne decorated with rudder and ball on the right side and wheel on the left side; 30 in. (76.2 cm.) high. Estimate: £25,000-35,000.

Provenance: Henry Lascelles, 6th Earl of Harewood (1882-1947) collection, acquired prior to 1948, at Harewood House, Leeds; and thence by descent.

THE PROPERTY OF THE LATE 7TH EARL OF HAREWOOD, K.B.E.
SOLD BY ORDER OF THE EXECUTORS

Notes: The Roman counterpart of the Greek goddess Tyche, Fortuna was not only the goddess of chance and luck, but was also associated with fertility as well as with political and military power. Fortuna enjoyed numerous cults in Rome and was employed by emperors such as Augustus for the promotion of their leadership. The above statue shows the goddess bearing a cornucopia as the giver of abundance, whilst the depiction of a rudder hails her as controller of destinies. The inclusion of a ball on her right indicates the uncertainty of fortune, whilst the wheel to her left alludes to the circle of life and the vicissitudes of fortune. For the type, cf. F. Rausa, 'Tyche/Fortuna',Lexicon Iconographicum Mythologiae Classicae, VIII, Zurich and Munich, 1997, pp. 115-141.

THE PLESCH COLLECTION OF ANCIENT GLASS

Christie’s will be offering the second part of the Plesch collection of ancient glass, having offered part one in 2009. Peter and Traudi Plesch fell for the lure of ancient glass on their honeymoon in Israel, which sparked a shared passion for collecting ancient glass. Their one criterion for purchasing a piece of glass was that both Traudi and Peter should want the object, though not necessarily with the same passion. The frequent invitations given to Peter Plesch to lecture worldwide on Cationic Polymerisation, his specialism at Keele University, afforded the couple the opportunity of scouring antique shops in many countries for antique glass and other works of art. Traudi Plesch’s interest in ancient glass, and her lectures thereon, were a small part of her major life’s work, which was volunteering locally and spearheading fundraising for the Douglas MacMillan hospice, the British Heart Foundation and the NSPCC among others. Her work was recognised in 1988 with an MBE for ‘fundraising for charities’, and in 2000 with an OBE for ‘services to the county of Staffordshire’. A local newspaper referred to her as the ‘Robin Hood of the Westlands’, the area of Newcastle-under-Lyme where they both lived. The present selection spans Egyptian to the late Roman period, and bears testament to their desire to have beautiful but also academically meaningful pieces. Highlights include a Roman pale green-blue glass sprinkler flask, circa 4th century A.D. (estimate: £2,000 – 3,000).

THE DEREK CONTENT COLLECTION OF ANCIENT GOLD AND SILVER STATUETTES In the face of the lack of serious scholarship on the important subject of classical sculpture in the precious metals, Derek Content set out to form a collection of this material in the 1970s, with a view to eventually publishing a large enough group to allow scholars to study this miniature yet important art form in more detail. Christie’s is delighted to showcase 17 of his 160 ancient figurines, which includes Roman gods and goddesses, as well as mythological subjects, such as this rare depiction of Cerberus, the three-headed dog who guarded the entrance to the Underworld. The selection also includes a charming Roman silver mouse, nibbling on a loaf of bread, which is said to have been excavated in the UK.